Poor Ashley. If I were you, I’d have stopped giving two shits about my father a long time ago. He hasn’t been there for you at all. He came back and promised to stay with you, and you believed him, you poor sap. Then he gallivanted off somewhere else and left you all alone, again. I’d ditch that idiot and move to England.

Melodrama! Something akin to the story of Imagine: Your Dad Sucks, or something. Trust me; Another Code: R—the sequel to Another Code, which was released in America-land as Trace Memory—is super-duper. You should buy this game without hesitation, assuming you can. Too bad Nintendo hasn’t published it in America or Australia, naturally because they want to alienate as many gamers as they possibly can (a side effect of Nintendo’s president making game consoles for old ladies). Ninty, if you want me to retract that, buy Cing and hire their members so they don’t have to claim bankruptcy no more.

Now that Ashley Robbins and her father, Richard Robbins, have discovered the person who killed Ashley’s mom, can they finally put it behind them and be a normal family again? No, of course they can’t. Richard Robbins thinks that there is more to his wife’s death, and buggers off to find the answer. Well, Ashley, looks like he really doesn’t care for you.

Despite having played only about half of the original Another Code, I was still able to follow the story of this game perfectly. The animosity between Ashley and Richard takes up most of the storyline, so if you’re a lover of science and not a big fan of parental drama, then most of this game will be lost on you. 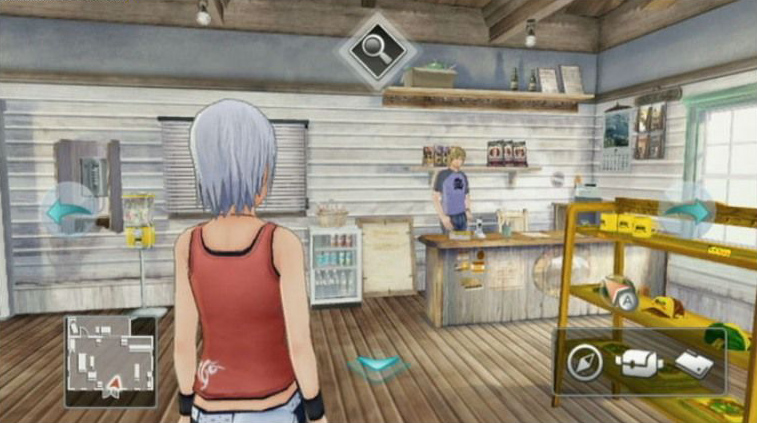 You can interact with and examine objects whilst looking for clues.

Characters and story go hand-in-hand like a psychiatric patient and his unicorn friend, and if there is a main character worth talking about, it’s Ashley Mizuki Robbins. Ashley is the cutest girl I have ever seen, ever. If the character designer hadn’t sat down with the word “innocent” in mind, then I’d be thoroughly surprised. I’d never before met a character who stirs up such emotion in me; I just want to give her a cuddle and tell her everything’s going to be all right.

Over the course of the game, she matures greatly. She discovers memories locked away in the far reaches of her past—and we’re with her every step of the way. There are times when she acts like a completely spoiled brat and argues with her father, but eventually she learns to forgive him for his wrong-doings and to love him as her father.

There are a lot of new characters, ranging from aspiring musicians to scientists and their daughters. Not a single character lacks charisma or depth, and they retain the same “Cing style” that anyone who has played Another Code or Hotel Dusk will recognize. The animations could do with a little bit of work (they don’t seem as expressive as the drawn animations from the DS titles), but I still connected with the characters on an emotional level, which I find myself unable to do when reading novels. 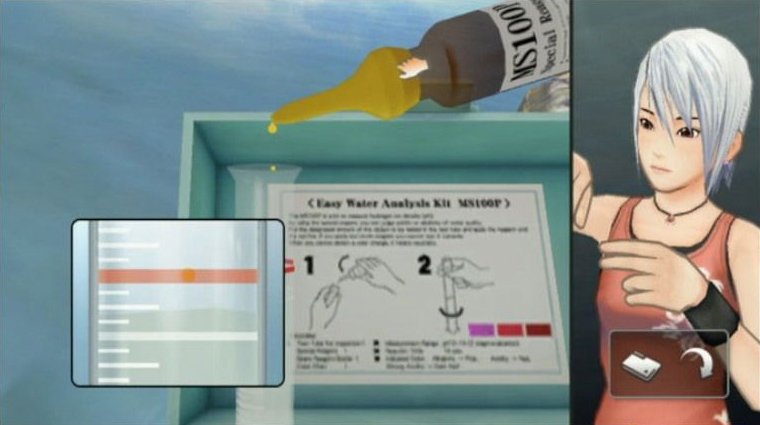 I once did an experiment like this at school, but we used paper, not a solution.

Another Code: R is an adventure game in the same vein as Hotel Dusk—you’ve got people to find, questions to ask, and things to do. Sometimes you need to help someone out with their errand before they’ll even consider helping you out with yours, a courtesy that isn’t always reciprocated by the other characters. Ashley is still a parrot, repeating everything that’s said but adding a question mark to the end of it, instead of forming it into a proper question like Kyle Hyde had no problems doing in Hotel Dusk. When a character says something in green, it inevitably becomes a question that Ashley will happily repeat.

What do you mean by “happily repeat”?

I mean that you’ll take something that doesn’t appear to have much story importance and repeat it. This justifies the proposed theory that asking questions is your only purpose in life.

At times, she’ll come to the correct answer to a problem by asking four different questions, when one simple question would have sufficed. Also, she’ll ask what a normal, everyday thing like a mortar and pestle is, and she’ll speak in idiom-riddled speech such as, “I’ve already had the third degree.”

Also, the character she’s talking to tends to stop speaking right after saying something in green, giving her the opportunity to select her question, when it would have made more sense for her to just ask it automatically. She is a silly, silly girl. The developer, Cing, is well-known with adventure gamers, specifically those who own a Nintendo DS. Another Code and Hotel Dusk were well received, particularly for their clever integration of touch-screen features. The puzzles are an important part of those two games, but they’re not as integral as one would hope in Another Code: R. There is a lot more dialog than in the last game (which left you alone with little human interaction).

Another Code: R‘s puzzles have one little problem, and that is the Wiimote. The hardware oftentimes disagrees with the player. I’ve never known a single Wii game to feel truly innovative because the motions that the controller can perform are fairly limited. Another Code: R is trying to be creative, and some of the puzzles definitely are, but the cursor jumps around the screen, and puzzles that require precise motion are very hard to clear without making a few mistakes.

Despite the incongruence between the motions you make and those that the Wii picks up, the puzzles still remain fairly playable and interesting, ranging from simple turning puzzles to more complex dragging puzzles. When you reach JC Valley Laboratories (in about the last quarter of the game), the puzzles come thick and fast, and all of them are very, very clever. One puzzle involves using the Wii Home Menu (the one that comes up when you press the Home button) to discover the answer. There is also a very, very interesting use for the Nunchuk. I’d hate to spoil it for you. 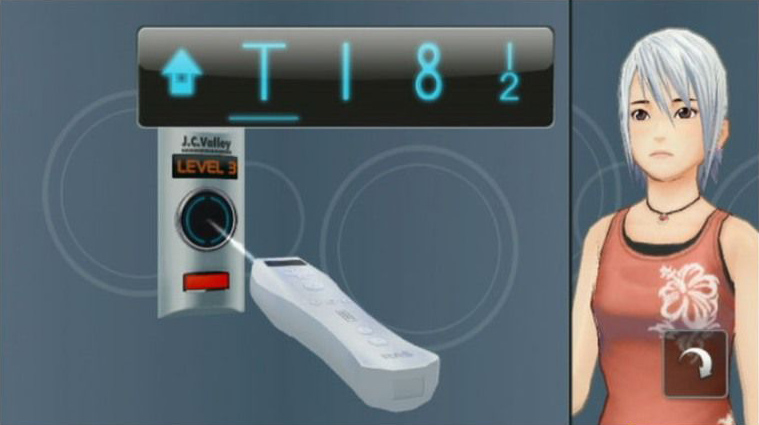 When you access the Home Menu, you get the answer.

This game is beautiful. It utilizes a pop-up storybook style when loading rooms and open areas, similar to Yoshi’s Story. The areas themselves strongly resemble a watercolor painting. In addition, there’s some cel-shading around the characters: enough so that it makes them stand out, but not so much that it becomes a “style-decision” like with No More Heroes or Killer 7. There is a strong impact from the look and feel of this game.

It also has a serious message, about forgiving others no matter what they’ve done. I can understand the moral of the story, but if I were Richard Robbins at the end of the game, I definitely would not have hesitated to fire that pistol; that’s for sure. It also has a fair share of other morals: Don’t give up on your dream. Recycle all the empty soda cans you can find. Don’t let Cing leave the gaming gig. Release Last Window in PAL and NTSC-U territories.

Cing. If you truly have bit the dust, then what a game to go out on. But there’s life in this monster yet.

What do you mean by “what a game to go out on”?

…sigh. You ruin it when you open your pretty mouth, Ashley.

The exciting conclusion of the Mike and Jeddy show! This is PART TWO, so make sure you listen to part one first! With all of this listener mail, will Michael Gray and Alex Jedraszczak be able to read