Potential crossovers that could have been: Shounen Jump All-Stars vs. Capcom, Virtua Cop of the Dead, Mega Man vs. Street Fighter… Why the dying Mortal Kombat series and the DC Universe? Come ON guys, whose idea was it to take these two universes and combine them?

Whose idea was it to try to convince us that these two worlds can actually co-exist? This is some comic book fanboy’s dream—not mine. I don’t get any happiness from watching a fighting series I can’t usually stand crossing with a comic book universe I’ve never enjoyed.

Whose idea was it to develop a fighting game in the Unreal Engine? You know how I feel about that engine. I hate that engine. Its crappy nuances get in the way of the realism.

The game itself is tight enough. Traditional Mortal Kombat, complete with anally-retentive stiff moves that result in your character moving like a cardboard cut-out (which is part of the series’ appeal). It looks similar to Mortal Kombat Armageddon which was released on the Wii, and seems rather rushed in places.

There don’t appear to be any “Babalities,” “Animalities” or “Friendships” in this game, either. What a swizz. We have the new “Heroic Brutality” moves, a variety of Fatality moves for the DC heroes. Why couldn’t they just call them Fatalities? I guess DC doesn’t like the idea of their heroes actually “killing” people. Fatalities and Brutalities are as tricky to pull off as they always have been, and you have to read a strategy guide or an FAQ to find out what they are and how to do them. 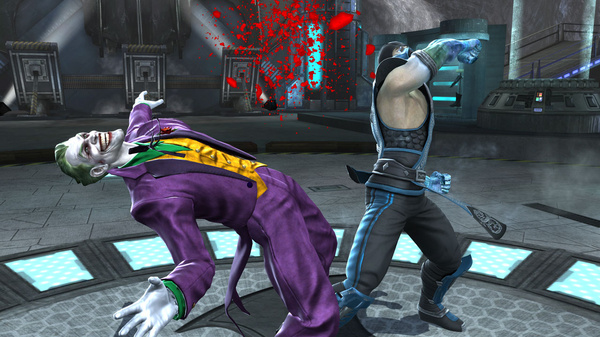 The Joker is the highlight of the story mode, being hilariously loony as usual.

The meat of the game is the story mode. Trying to make a decent story out of both universes doesn’t work. Still, they’ve tried their hardest to make a decent system for the story, and the battles load during the pre-rendered cutscenes, which makes everything feel smooth and seamless. (Note: If you’re going to pre-render the cutscenes, don’t render them with glaring graphical errors.)

There is also a Kombo Challenge mode and an Arcade mode. Other than online support, the game doesn’t have much else to offer, which is a shame considering the absence of Kreate-a-Fighter and Kreate-a-Fatality modes from the last few games.

Limited, simple and thoroughly basic. If you bought this at full price when it came out, you’re one of the silly sort. Even for more than £13/$20 you’ll be thinking, “Was this worth what I paid?” You can get Johnny Platform’s Biscuit Romp on the Xbox Live Indie Games service for $1: a mere fraction of the price, for a game that I can recommend. Whipped like the family pig.

Every Superman game has been a disaster, and this is tainted for sure. Mortal Kombat vs. DC “We Wish We Were As Awesome As Marvel” Universe is a game for fans only, until it becomes more affordable; then it’s just another game to drain of Gamerscore to help grow your e-penis.

I was lucky enough to  be watching the local news when they actually had put together an interesting story.  Video games can actually make people become better surgeons.  The newsman spoke with a d