Every review of an Ys game begins like this, but let’s cover the basics once again for any newcomers. Yes, Ys is a word; no, you are saying it wrong. And yes, the latest entry in the series really is titled Ys Seven rather than Ys VII or even the tacky but still more obvious Ys 7.

With that out of the way, this would normally be the part where I start fanboygasming over the upcoming flood of Ys thanks to the recent partnership between Falcom and Xseed, but like many reviewers I’ve encountered some things in the latest entry in the series that I’d like to gripe about. However, my gripes lie in the exact opposite direction of most of the complainers, so I’m going to answer their stupid noob complaints with even stupider elitist fanboy complaints.

Don’t get me wrong: the game does a lot of things right, and it’s best to start there. Much of what I said in my review of Ys: The Oath in Felghana still applies. Fast-paced action, challenging boss fights, a fantastic soundtrack—these by themselves are enough to carry the game. Ys Seven further distinguishes itself by adding party members for the first time in the series. Series protagonist Adol Christin must always remain in the party, but the other two slots can be filled from a selection of six additional JRPG stereotypes, including: 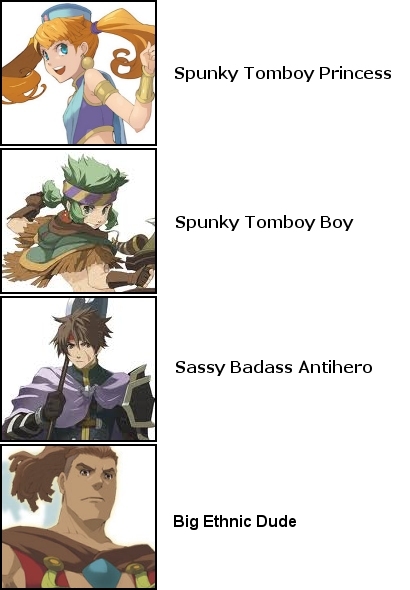 Each character has a different attack type—slash, strike, or pierce—which is effective against different types of enemies. This places some limits on what makes an effective party, but also provides some much needed variety by requiring you to switch between characters every now and then instead of just playing as Sassy Badass Antihero the whole time.

And variety is definitely something the game needs. Whereas the last three games in the series had strong platforming elements to spice up the dungeons, Ys Seven is a more single-minded Secret of Mana-style enemy gauntlet.  There are still a few interesting elements here and there—lava that must be avoided or crossed with a special item, wind gusts that can be ridden to higher areas—but don’t expect to see much in the way of Zelda-esque “hookshot to ceiling, shoot arrow into switch, manipulate series of levers, spin around five times and play a song on your magic glockenspiel” puzzles.

The COMBAT-COMBAT-COMBAT nature of the gameplay would be fine if the game also boasted that central defining feature of Secret of Mana: co-op multiplayer. But it doesn’t, and thus the game often feels much the same as playing Secret of Mana single-player—which is to say, not everything that it could be. Ys Seven can at least boast a faster and more intense single-player experience than Secret of Mana: this is the game Square-Enix should have made years ago instead of turning the Mana series into their official repository for bad ideas.

Since I’ve mentioned the speed and intensity of the combat, it’s time to address the first of those common complaints…

Complaint #1:
The game is too hard/Some of the bosses are cheap.

My response:
Unless you’re a wussy turn-based RPG player who was tricked into buying the game by all the anime characters and zany fantasy magic on the packaging, this is by far one of the easiest Ys games ever. The game probably should be retitled Ys: Ysy Mode, but I don’t think you’re allowed to make puns out of words that no one knows how to pronounce. I played the game on Hard and beat most of the bosses (including the final boss) on my first or second try; compare this to Ys: The Oath in Felghana, where I died two or three dozen times on the final boss on Normal—and all of those deaths were entirely due to me not being good enough, just like my high school gym coach always told me. “Nightmare Mode” was once something spoken of with quiet trembling, but in Ys Seven it’s the only setting that provides a significant challenge.

The story is too simple/clichéd, and the game is too short for an RPG.

My response:
Ys Seven has too much story and dialogue, and it’s too long for what is essentially a beat-’em-up. Adol’s motto has always been “I let my sword do my talking…because I’m mute,” but his party members in Ys Seven are unfortunately committed to making up for his silence. You’ll be treated to scene after scene of the main characters telling each other things you already know, and the frequent visits to towns—where the trademark action grinds to a halt—don’t help matters. All this blather slows down the game and stretches it a little beyond its welcome. The last few games could be finished in about 10 hours and included a boss rush or other unlockables; Ys Seven clocks in around 25 hours the first time through, and far too much of that is spent not slaughtering things. And so with the slower pace, the lower challenge, and the lack of even the standard postgame boss rush, a lot of the addictive, immediate replayability of the last few games is lost.

My response:
Pah, unnecessary JRPG fluff. The included equipment crafting system is bad enough, requiring you to farm materials in order to produce better weapons. Thankfully, materials are absurdly abundant, to the extent that it seems like an admission that the crafting system was kind of a dumb idea and the developers didn’t want you wasting too much time on it. The only real difference between weapons besides power is the skill attack that can be learned, and these mostly boil down to “unload a lot of damage on the enemy all at once.” Much like the bloated JRPG-esque story, I feel this is a step in the wrong direction from the last two games, where characters had a smaller set of skills which were better integrated into the design of the dungeons and boss fights. Here, it’s just kind of a spamfest of whirling blade attacks and exploding uppercuts rather then the delicately choreographed dance of the Whirling Blade Attack and Exploding Uppercut seen in Ys: The Oath in Felghana and Ys Origin.

I’m probably being overly harsh; I don’t mean to scare anyone away. Ys Seven really is a worthwhile game and a welcome (and desperately needed) addition to the PSP library. Newcomers to the series probably won’t share most of the complaints I’ve made, and they’ll be in a better position to appreciate the upcoming U.S. release of Ys: The Oath in Felghana. Well, either that, or they’ll all write reviews asking “Why isn’t this more like Ys Seven?” and I’ll have to write yet another review in which I explain why all the things they hate are wrong. Until then, if you’re looking for some enemy-mulching action and find a zen-like peace in watching JRPG dialogue scroll past, give Ys Seven a go. 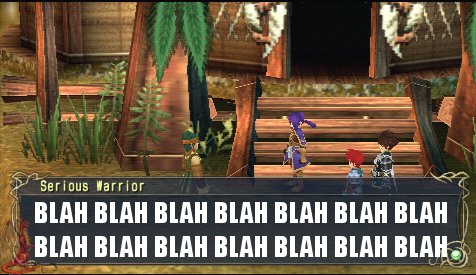 After a year of saying she would, Anna finally did a flag routine to videogame music!