A major highlight of the earliest LAN parties I attended was the hotseat game of Heroes of Might and Magic that someone always had running off to the side. Well, it was a highlight for everyone else: I did not own the game and was thus terrible at it. While my friends deftly applied their knowledge of things like “build order,” “resource management,” and “which unit types don’t suck,” I relied on the classic Soviet-inspired strategy of throwing giant walls of conscripted peasants at all my problems. (For some reason this doesn’t work as well in videogames as it does in real life, probably because the Germans didn’t bring undead dragons and medusae to Stalingrad.)

Struck by a sudden nostalgic yearning for some incompetent flailing about, I decided to give King’s Bounty: The Legend a go. This may have been a mistake, because it turns out the game is actually a remake of a much older King’s Bounty which served as the original inspiration for the Heroes of Might and Magic series. In other words, I had unwittingly purchased the tutorial for the genre. This was the exact opposite of what I was looking for—I didn’t want to actually get good at this, dammit!—but King’s Bounty nevertheless proved to be a moderately enjoyable experience up until the point that I became completely bored with it.

No particular aspect of the game is executed badly; it’s just that there isn’t quite enough there to hold your attention from start to finish. The most engaging part of King’s Bounty is its presentation. The character design is a pleasant and light-hearted break from the usual gritty fare seen in Western PC games, and the graphics have a fun, colorful visual style, calling to mind the classic fairytales of childhood or possibly the Scandinavian metal band album art of adolescence. And the writing is…er…well, the game was developed in Russia. The translation itself is usually fine, but the tone is such a surreal blend of friendly enthusiasm and casual misogyny that I nevertheless find myself shouting all the dialogue in an Eastern European accent.

All of these elements give the game a charm which is perhaps its greatest strength: every time the gameplay begins to bore you, you’ll look into those whimsical fantasy faces and hear “HELLO FRIEND, LET US MAKE FIGHT WITH MAGIC DRAGON ONE MORE TIME YES?” and stick with it for a few more battles. Because really, King’s Bounty: The Legend is just Heroes of Might and Magic: The Battle System…and that’s all. There is no city-building or resource management: you march your lone hero and his retinue around, completing sidequests for anyone who will talk to you and committing aggravated turn-based combat against anyone who won’t.

As much as I’ve been down on turn-based battles lately, it’s amazing how something as simple as adding movement to the system can make it bearable. The constant introduction of new unit types also helps to extend the battle system’s enjoyability, but you’ll still eventually find yourself wearily reusing the same handful of effective strategies again and again. The original game (like the Heroes games) apparently had a randomized map and lent itself to shorter replayable sessions; here, you only have a large single campaign with some randomization of spells and quest rewards to keep things fresh. 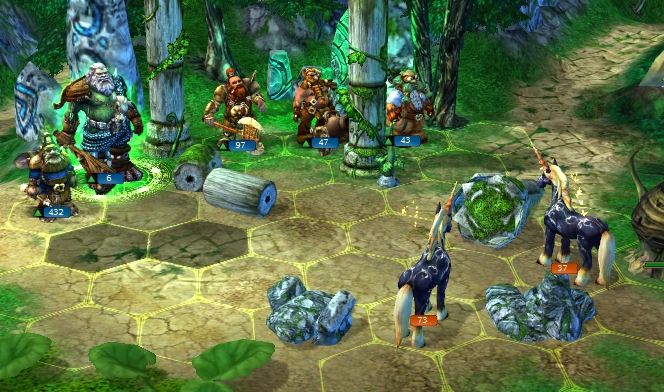 For those who are more familiar with JRPGs, think of it as Final Fantasy Tactics: Sweaty Bearded Men Edition.

Although a little more randomization would have added to replayability, the non-random elements are numerous enough that you can try a few new things each time you restart the game. The three playable hero characters require slightly different approaches to battle, and the large variety of unit types allows for experimentation—my own army started as a multilateral cooperation between humans, bears, and giant snakes, but I eventually gave in to the game’s anti-integration morale mechanic and started marching an army of Dwarf supremacists around the kingdom. (I can’t even look at those motivational workplace diversity posters anymore without imagining a little frowny “Low Morale” icon in the upper-right corner. Thanks, King’s Bounty.)

If racism is your kind of thing, you might also enjoy the weirdly sexist marriage system: you’ll meet several possible brides during your journey, all of whom provide different bonuses and serve as pack mules for extra equipment and stat-boosting babies. (Luckily, there’s an infanticide cheat if you get stuck with lame kids.)  There’s no need to worry about picking the wrong wife: if a better prospect comes along, you can dump your current wife at any time…or turn her into a zombie against her will. Whatever.

Mail Order Brides: The Fantasy and the Reality

As is my usual habit, I’ve reviewed this game well after sequels have rendered it irrelevant. Based on the content I witnessed in King’s Bounty: The Legend, I’m assuming King’s Bounty: Armored Princess is about the suppression of a violent feminist uprising, and the recently released King’s Bounty: Crossworlds probably involves beating up transgendered people or something. I’m sure the sequels improve upon the original and I’d recommend the series to hardcore fans of the genre. But as for me, I think I’m ready to move up to the meatier Heroes of Might and Magic to see if I can now survive into the second turn.

Hey GameCola readers. I bet you were really impressed by Carl's review of Indiana Jones and the Last Crusade.* I bet you said, "Wow, how topical Carl is! Writing about Indiana Jones shortly after the