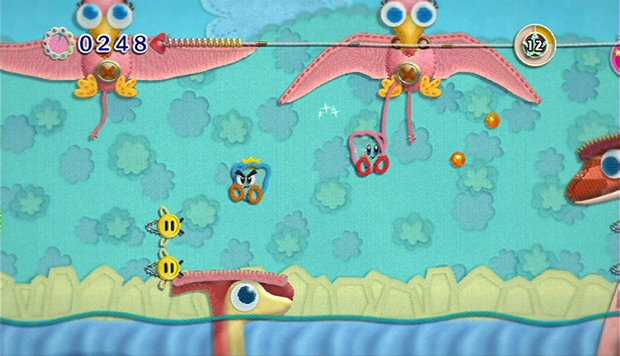 We’ve previously heard that Masahiro Sakurai, the producer of Kid Icarus: Uprising, had already come up with the basic idea for the game before deciding which classic Nintendo character to stick in it. Now, Destructoid is reporting that the exact same thing happened with Kirby’s Epic Yarn, too.

According to Destructoid, developer Feel Good had already started work on what they were calling Fluff’s Yarn, starring a character named “Fluff,” before Nintendo co-opted it for their new Kirby game. Fluff found a new home as Kirby’s side-kick rather than the main character, but the team was reportedly very sad, because they put a lot of work into the Fluff character, and now he’s totally not going to make the cut for the next Smash Bros. game.

This change in license may, perhaps, explain why Kirby’s Epic Yarn appears to have less to do with anything at all Kirby-related, and more to do with beating bad guys to death with pieces of yarn. Not that it doesn’t look awesome anyway.

In other news, Nintendo has reportedly purchased Gearbox Software and will be once-again restarting development on Duke Nukem Forever, rebranding it as the latest in the Clu Clu Land series and turning the main character into a fish. No other changes are planned for the game, except that Duke’s famous catchphrases will now consist mostly of gurgling sounds.