In celebration of All Hallow’s Eve, here’s the third of four scary-game reviews by GC writer and acclaimed scary person Meteo Xavier. Check GameCola again tomorrow for one more! (You can read the previous two reviews in this series here and here.)

Yeah, we’re really reaching into some irrelevant territories for Halloween now, aren’t we?

While Resident Evil 2 is like 12 years old and has as many different versions and extensions as a drag queen museum (you know, because you’re looking at different versions of drag queens in history…and their hair extens…fuck it—fail), survival horror and possibly horror games in general would not have come through in the last decade if it weren’t for this gem. The George Romero influence is especially clear in early Resident Evil (so much so that George himself directed a Japanese commercial for something related to RE2 that I recommend watching just so you can feel the insatiable stimulus of your pubic hairs curling up and falling off like kidney stones in your pants), and this game IS Dawn of the Dead, Capcom style.

The first Resident Evil for PS1 was a nice warm up, but it was mostly a showcase of potential for down the road, and Resident Evil 2 did not disappoint. 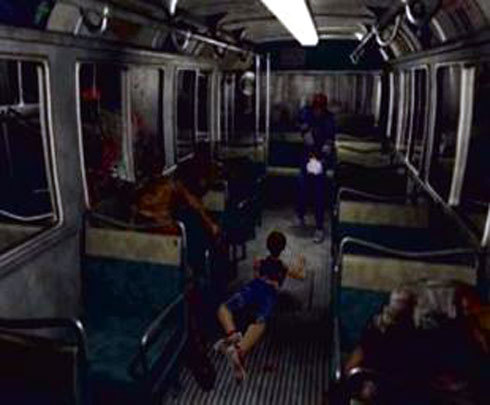 Unlocking the mysteries of a mansion is fun, but a police station and part of the city? Much better. Things get started with a big fucking bang as Leon Kennedy and Claire Redfield narrowly dodge a zombie-administered semitruck rimjob that splits their fate irrevocably in twain. I don’t know why exactly they were never really able to overlap their quests into one thing from there (which I’ll go into later), but this one minor split starts off two highly courageous attempts to solve another insane corporate espionage and clean-up job from Umbrella.

This game is heavily improved upon all the way around. Better controls (no, I don’t care that they control like a tank; it works once you get used to it), better graphics, awesome ambient soundtrack, Leon and Claire make great Chris and Jill substitutes, and the fact that now you’re crawling through the wreckage of a post-war police station. How badass is that? Kudos to Capcom for having the foresight to have the game take place in the one police station in all the world that has a library, a clock tower, a water tower, a waiting room on the second floor with a hallway that doesn’t lead to anything worth waiting for, multiple art galleries, sewer access, and weapon storage rooms with machine guns that was somehow managed impeccably by a serial necro-rapist up until the outbreak. It’s awesome.

The big draw here is the original Zapping system, giving you a total of four different (but not too different) possible scenarios depending on who you choose first. While Leon’s going after one section of the conspiracy, Claire is drawn into another. What you do the first time around affects (though not to a huge degree) what happens for whoever gets the second scenario. It literally doubles the depth of the game from the first Resident Evil and provides enough conflict and general badassery to go around. The ending benefits highly from it as well. 🙂 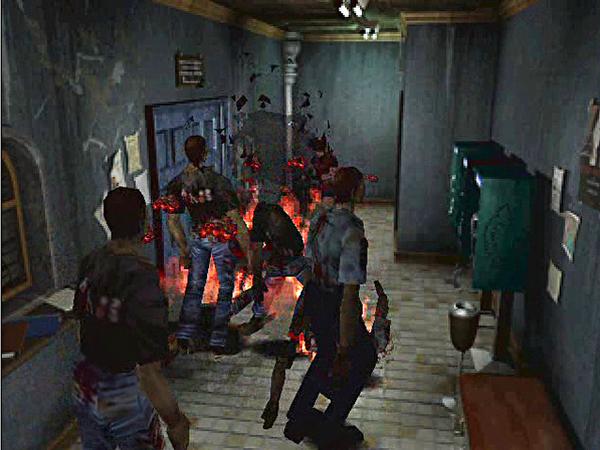 If there’s anything really to hate here, it’s that the Zapping system doesn’t always work perfectly. If you choose Leon first/Claire second, you’ll see plenty of revisionism as the scenes play out from the other perspective (example: when Leon meets Claire again in the STARS office, Claire gets a story-related fax in that same scene in her B scenario when she didn’t get it in the A scenario), plus there’s lots of clones and opportunities where you wonder why they didn’t just meet up to better ensure each other were alive. Lots of plot holes and unanswered questions there.

But that doesn’t hinder the game in the gameplay sense, so don’t worry about it.

I can’t gush enough about this game. Any game that inspires you to play it through 10 times in a row, over and over again, is a classic, and it deserves to be regarded as such. Not the most Halloween-ish game in the world, but it does its job immaculately, even after Resident Evil 4 and 5 and after all these years.

Additional brownie points go to the N64 version, which somehow managed to cram both discs of the EXTENDED version of the game inside a Nintendo 64 cartridge. Let’s see you do that!

Welcome to Pimp My 'Cola, the article that talks about advertising for GameCola. This is my second and last time writing Pimp My 'Cola, following in the footsteps of former Pimp My 'Cola writer Gina H ...