In celebration of All Hallow’s Eve, here’s the second of four scary-game reviews by GC writer and acclaimed scary person Meteo Xavier. Keep checking GameCola over the next few days for more! (You can read yesterday’s scary-game review here.)

The House of the Dead is every major horror game taken to a hazmat security room, stripped off by super-scientists in radiation suits, pieced together like Frankenstein’s monster, and unleashed into the arcade world where, instead of approaching it carrying torches, the people embraced it fully with lots of love and hugs and kisses.

It’s kinda like that Dawn of the Dead video I have that somehow went into an episode of The Care Bears.

“The House…of the Dead…!” You know this arcade soundbite by heart, because we’ve all heard it and responded in kind to its conjuring. With such an effective oral hook, (really, has any arcade sound loop ever been as awesome?) somehow drowning out the other high-shelf EQ noise of “Dayyyyyy-to nah! Let’s go away!” and “Welcome to the mikulobiteswampalegamuss featuring Hop-ping Har-ree and Jump-ping Jack!”, it’s small wonder this game, introduced around the same time as Time Crisis and several other light gun favorites, is still a quarter-muncher years later. 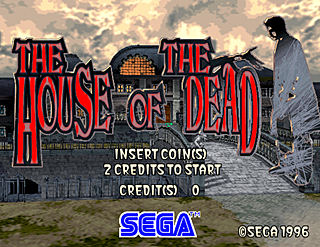 For the record, I’m only reviewing the arcade version. This game has been ported several times to what I understand were mixed successes. You don’t see a lot of reviews for old arcade cabinets anyway, so let’s get a-crackin’!

House of the Dead, a two-player light gun game with guns that ironically made me want to shoot the person who designed them (because the cables were in reverse or something that made it really difficult to hold comfortably), is part Resident Evil, part Zombies Ate My Neighbors, part Alone in the Dark, and maybe a little Splatterhouse in there, with a dash of Ghouls ‘n Ghosts wrapped up in a genuinely gut-wrenching experience. From the get-go, you blast through the ghastliest courtyard this side of Grey Gardens. Your car pulls up while some pussy white-suits are running from some very tall and surprisingly spritely cadavers. Realistically, these corpses would be much too stiff to be able to lift or throw hatchets, speed through halls, or mow down walls and doors with chainsaws, not to mention that the damage done to their brains as the decomposition fluids ate the fibers that dictate coordination would make slashing with wave swords and claws and throwing barrels much too difficult to warrant extreme danger. (Oh yeah, and they would be dead, too, so no real danger there.)

Of course, they’re not all zombies here. There’s all kinds of fucked up monster mashers attending this dead man’s party. There’s things with horns and saucer eyes, and some with huge fangs! I see huge carrion worms, greeny goblin things, huge demons, knights and so forth in your future if you try this game. Hell, the first chapter alone has as many shocks as your average Resident Evil game, and far more interesting and dangerous enemies. The mansion is also more interesting (though with obvious nods to Resident Evil as it goes underground and eventually leads to a lab), because it features a lot of branching paths and different rooms based on what you do, who you shoot, what you don’t do, etc. You can even affect the ending, which isn’t common in an arcade game. 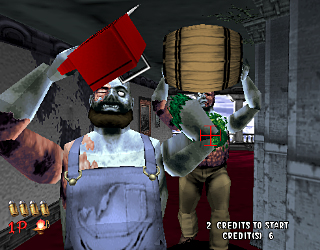 Saving people is another fun twist to the game, a nod to Zombies Ate My Neighbors I’m sure, where saving them earns you extra lives (nice) and can branch your game out (very nice). While I’m sure there are people who would rather just watch them get dismembered by hatchets and chainsaws (waste of effort, considering they die in very boring ways), it’s really against your better interest not to make the effort. This game can get fast and tough, and you’ll really want those extra lives.

Or maybe not. Like all arcade games, this one is designed to suck your quarters, not to give you a great overall 1-2 hour experience. Anyone who has ever played a light gun game knows that, after 10 minutes or so, firing the same bullets at the same rotting ghouls over and over again gets tiring. Unlike Time Crisis, were you get a second to breathe, this one is straight-up action, every second of the way. It almost gets to be too much. A better solution is to buy a home version of the game to enjoy it all the way through, and then you run into the same problems all arcade games have—they’re short, difficult and highly repetitive. Honestly, I can just watch the walkthroughs up to Chapter 3 or so, and I’m good for a while.

But the House of the Dead is a great play any time you get to it. Sega really stepped up the light gun genre here and House of the Dead has largely been kicking ass ever since. The most recent one stepped it up again with some great reviews that came in and an ending that will forever make you uncomfortable to say “motherfucker”. Good game, good scares, good shots and good fights.

This is NEWS! Tim Schafer—co-creator of Day of the Tentacle, lead designer of Grim Fandango and Psychonauts, and really nice guy who let me steal his Facebook photos—announced just minutes ago via