Boring lectures at university are easily and conveniently ignored with a couple of games on your iPhone.

Columns Deluxe is a regrettable purchase, but not one of The Orange Box scale, as it only cost fifty-nine of my shiny British pennies. And a pocket full of ten-pence is of roughly equal cost to a confectionery bar of some kind, so you can decide whether you’d prefer a Mr.Tom or a dire excuse for a game.

Practically anybody can develop for the iPhone. Now that there is finally such a platform where any developer can make a quick buck, there are hundreds of releases weekly that are hardly worth their meager asking prices. Columns Deluxe is one of those.

The visuals are horrible, grainy, stretched mush. The fonts are of a high quality and look really good, but the rest of the game’s graphics have been recycled, from all over the place. Some of the backgrounds and sprites have been taken straight from Puyo Puyo N, and it’s so frightfully obvious that there is no way the developers could have been oblivious to it. 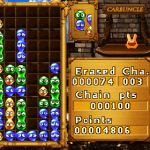 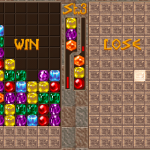 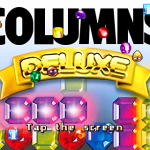 There are two games in Columns Deluxe—Columns and Puyo Pop. Both are unfaithful recreations that veer quite far from their original arcade versions. With no Sonic Team involvement, there is no pretty Puyo Fever artwork. In Exercise mode, Carbuncle is very lifeless compared to his appearance in the original Puyo Puyo. Although the Puyo Pop mode gameplay is moderately accurate, it is also very laggy and crawls terribly.

Columns looks and feels more respectable. It has some medium-quality sprites which aren’t so blatantly ripped from an earlier game. The music in this mode is the music from the Genesis version of Columns. But with every menu option you scroll through and every piece you place, a sound similar to a cat leaping onto a grand piano is played.

There is a truly horrible control scheme of flicking and tapping, rather than a set of onscreen buttons. And why allow players to use the iPhone accelerometer to control the drop speed of the pieces? I was trying to work out why my pieces were rapidly descending, and it was because I had the iPhone tilted. You can turn this feature off, but it shouldn’t really be there to begin with. Like anything implementing motion controls, it’s just a fun-hindering gimmick.

And I have plenty of examples to back up my opinion of motion controls being crappy.

Whereas Columns Deluxe would be a fantastic game on a traditional Java-supporting mobile phone, that quality of game just isn’t suited to the iPhone. I expected better than a bunch of fools clowning around. Even though Columns Deluxe was first released in 2008, I can’t go easy on it, because I felt that they did not properly respect my favorite puzzle series, Puyo Puyo. It’s not all bad, but it is in no way a “deluxe” package as promised.

What Columns Deluxe could benefit from would be a Bluetooth multiplayer mode. Then, for a fistful of cents, you and your friend could waste lectures away in the versus mode—but sadly, this has not been included.

You thought that video of two soul-dead teenagers having the worst day of their lives was bad? Check out this shakycam footage of additional Kinect Star Wars gameplay: specifically, Han Solo and Lando