I love K-On!, and I love this game—let’s get that out of the way right now.

It doesn’t take a genius to realize that K-On! was at one point the most popular current anime in Japan. So after the success of the two Project Diva games, Sega took the formula and applied it to the five piece band from K-On!.

Fact: Not everyone at Sega is a moron. 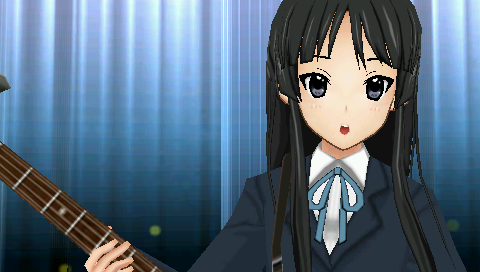 If you’ve been following the anime, then you know the band in this game rather well already. For those who aren’t aware, K-On! is a Japanese cartoon series focusing on five schoolgirls who are in the “Light Music Club” at school. They play in a band together and have a very strong friendship. When not playing music, they are getting into mild-mannered japes or munching on exceedingly good home-baked cakes and cookies.

The five members (Yui, Azusa, Mio, Tsumugi and Ritsu) all look nearly identical to their anime counterparts in this, their first videogame. The graphics are one degree shy of perfect, with character models, animation and outfits that sport much higher polygon counts than most other PSP games. Even so, the game does not slow down in the slightest during gameplay, which was something Project Diva did on occasion just to make it obvious you were playing a game on the PlayStation Portable.

Just to emphasise this point a little more, this is a stunning-looking PlayStation Portable game that doesn’t suffer slow-down. It’s like some kind of witchcraft.

Being based off of the anime, the songs in the game have been picked from the series itself, the singles, the album, or the Character CDs. The songs appear to be slightly different recordings (which I presume is to make the instrumentation more suited to a music game). Picking songs from the Character CDs is an absolutely genius idea. Four words; Girly Storm Shissou Stick. 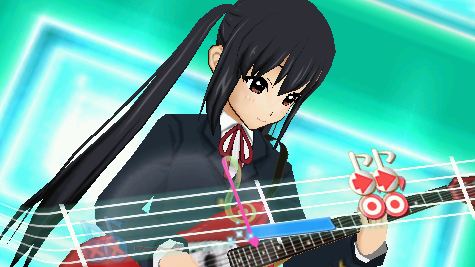 If we rated games on how cute the girls are…

K-On! has really good gameplay but not much else on offer to those who don’t enjoy Japanese-language games. If you’re not a fan of the J-Pop and J-Rock genre, or a fan of ridiculously adorable anime girls, then you will not find this game all that accessible. At least the Japanese menus are somewhat easy to navigate, being color-coded so you can also operate them by learning what color does what.

Fact: The main game mode is called “Ensou”, which translates to “Musical Performance”. If you misspelled the word as “Ensoshori”, you’d be calling the mode “Chlorination”. 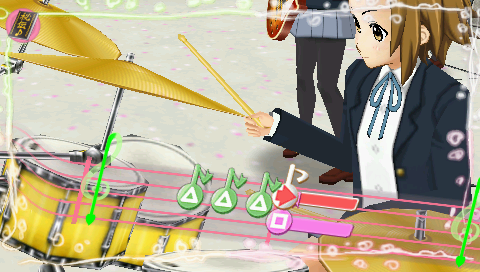 There are a wealth of unlockables in this game. Items such as trees, posters and the like can be used to customize the music room. There a few items with different purposes, such as those that change the location or the outfits of the characters. There are also items that, when shown to Mio, result in scaring her so much that she runs out of the music room, screaming at the top of her voice.

It is a funny game, but I do have some issues that aren’t easily forgotten. I’m particularly bothered by how the bass guitar is almost entirely inaudible in all of the songs, as if the lead singer had been given control of the mix. My other gripe is that the game has perhaps too much replayability, because the unlockables are unlocked by playing each song a total of ten times at least (and getting an S Rank on each song as each band member on each difficulty). The longer that takes you, the longer it’ll take to unlock everything. With the game technically beaten at 30-32% complete, the rest of the time is spent replaying songs as all the different band members, or with different items equipped.

I would love to see a sequel focusing on the music from the second season of the anime, or some of the Death Devil songs. If you’ve been following the anime and you’re in love with the characters, then this game is worth getting. It’s also a smashing game on its own, but you’d have to already be a fan of the series for importing this game to make any financial sense.

If you've been studying your GameCola archives, you may have conceived the notion that I have a soft spot in my heart for trivia games, a genre that is typically neglected by your typical gamer.  Thi