As I finished this game a couple of weeks ago, the theme with which to review it came rather sudden, like the expulsion of a full-grown baby boy out of a coin-operated clothes dryer from what had to be an alternate dimension (though no one was willing to find out exactly what was on the other end of the umbilical cord), and yet took its own sweet time to completely formulate over the discourse of the events that lead up to it. 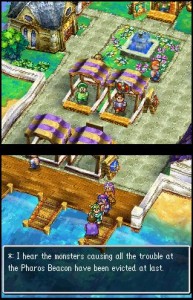 Ask yourself this, as I have: is any videogame worth losing a friend over?

I’ve quickly become a Dragon Quest fiend since I started with DQVIII, but, alas, I wasn’t planning to play this version (or this particular game) anytime soon. I have far too many games as it is to play. Still, former buddy Wesley Cho (that’s Bahamut of ocremix.org fame) was selling it, along with a slew of other games, in order to help pay off some financial difficulties. I had tried to help him sell some games in the past, but this was the only one I was interested in picking up myself.

What followed was something I came to regret ever setting into motion, as the temporary check I sent (because my bank screwed up) could not be cashed by the bank that he can somehow only get to once a week or less, which somehow snowballed into a complete misunderstanding on his part that I was accusing him of cheating me. I was not—in fact, I still have the chatlogs, and I counted at least three times where I said I wasn’t doing it—I just got grumpy when he demanded his game back when the subject was brought up. So even after I rerouted my entire day to get him some cash money, instead, the way he wanted it, because he couldn’t bother his roommate for a RIDE TO THE BANK, and then told him I did as he asked (and that I wasn’t happy with his reaction), guess what.

The fucker goes on to write me a scathing public “review” on OCR.

Well, great, thanks dude. It sure was worth upsetting my entire day to get you what you wanted, because your bank in the middle of nowhere doesn’t know how to take a proper temporary check. At that point I was so pissed I didn’t even want to look at the game, and I might’ve returned it, like he said to.

…the problem was, I already started, and was absolutely fucking hooked.

Dragon Quest V is a welcome addition to any DS owner’s catalog of entertainment, and one hell of a panacea for those who bash the many “Dragonquestiness” elements of the series. It’s about time I played a real old-school RPG the way I like it, with many of the modern conveniences that don’t make it too convenient, just efficient. 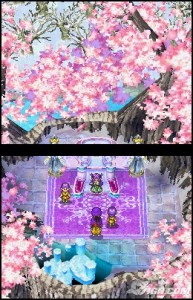 The Dragon Quest series is not really known for efficiency, but damn if this one doesn’t come close. From the get-go, everything is much, much faster and a delight for me after Dragon Quest VIII and VII. You can zip through and collect everything you need from a town in like 3 to 5 minutes, compared to DQVIII‘s like 10 to 15 minutes. You zip along at pretty good speeds in towns, dungeons, and even the overworld. The DAY-NIGHT concept is back, but put to very little real use—and even when it is, it goes between day and night in about half a minute.

So it’s a good game right from the get-go, and DQV, the second of the Zenithia trilogy, is in and of itself a recognized gem in the series for its plot and some surprising gameplay elements, like a Pokémon-style monster recruiting system wherein famous DQ monsters actually join up and become party members, learning skills and spells and equipping swords and armor and everything. In a series that could desperately use a few more party members for incredulous, redundant boss battles, this game comes as close to filling that void as it gets, I believe. Obvious “Dragonquesty” limits apply—like not being able to use the wagon in most dungeons—but still, it’s a nice touch. There’s also the casino, medal system, and a board game-style minigame that offers better stuff than the first two things combined, and is also really addictive in its own right. Just like the whole game.

And yes, the potential irony of losing a friend to play a DQ game where friendship is a key theme is not lost on me, thanks for pointing it out.

I think this game derives its addictive qualities from being a much less frustrating experience than other DQ titles. The difficulty level in this game, when combined with the speed enhancement and the eight total characters you can have in your wagon, is so much more manageable I could almost call this game a great way to introduce yourself to the DQ world (man, every time I say that, I keep thinking I’m talking about Dairy Queen), because there are only a few bosses you need to spend more than 20 minutes on or perform a lot of level-grinding for (which, BTW, is easier to do in this game than in games past). It’s just pure, well-tuned, good old fashioned RPG fucking fun on the DS. Hallelujah. 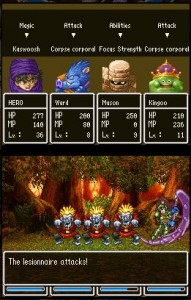 It still ain’t perfect, though. RPGs are never purely gameplay experiences, and while this game clearly shines in that department from start to finish, the story, for all its hype, never really jumped off the screen for me. Well, I lie, because there is a real subtle streak to many of the events that are pretty heartbreaking for a story about a little boy who goes through three  generations in his never-ending, genuinely life-long quest—but wow, were they hollow. It was only during the transition from Generation 2 to 3 where the events seem to elevate beyond simple text and characters moving around on the map. There ARE little cinematic scenes in the game, but for the life and death of me, I can’t figure out why there aren’t more of them during, like, the wedding, or when the children are reunited with their mother. On the other hand, I chose the new “third” wife the game introduces, a bratty slut named Debora, and watching her go from spoiled, nasty wife who uses you as her servant to genuinely wanting to pay back the obligatory demon lord for what happened to your parents is some of the best character development I’ve seen in a game like this in a while. Nevertheless, I’ve seen more dimensional drama in flipbooks than I saw here.

That being said, I had a complete blast going through this game. Many of the traditional Dragon Quest shit I hate are put to rest here in favor of trimming the fat and making a well-paced, excellent game to play portably.

But is it worth losing a friend over?

Hell fucking yes. Any dumb fuck who pulls that shit on you is not your friend. Dragon Quest V will never let you down the way Wesley Cho will.

Pick up a copy and get ready for the start of a beautiful new friendship.

You know what I have come to realize this month? That far, far too many of you don't *really* care about GameCola. We grace your e-mail inbox with our free-of-charge newsletter once every month (wel ...