(To catch up with the story and read previous editions of “Quantum Geek,” click here.)

Rick was aghast, though not for reasons one would think. Yes, he was extremely worried about his friends stuck in his creation and could do nothing but watch as they struggled through the games, but that seemed like a distant memory now. Tom was waltzing his way through The Secret of Monkey Island, completely ignoring all of the puzzles, and it was working. As a child, Rick had spent days trying to figure out where to use every item and clicking on each and every object on-screen just in case it might be important, whereas Tom just reacted as he would in the real world (or at least, a completely fictional real world). Need a ship, but Stan the salesman is in the way? Knock him off the dock and steal it. Need a crew? Promise anyone who comes along they can have the ship when you’re done. Don’t know where you’re going? Just follow the obviously glowing outline of the ghost ship. At this moment, Rick both admired and hated Tom for his ingenuity.

Rick was becoming increasingly worn down. It had been nearly a week since Tom had been sucked into I.D.E.A.S., and Rick had barely eaten or slept the entire time. Empty cans of energy drink littered the floor and, between Tom and Alli’s bodily functions and Rick’s lack of attention to his own hygiene, the smell in the room had become pungent. Additionally, Rick had noticed that Tom was starting to waste away, despite his efforts to keep his friend nourished, exercised, and clean (Alli, being a more recent victim, was still fairly healthy looking). Rick, for all his technical prowess, knew he was not a medical practitioner and lacked any of the equipment needed for keeping someone in a vegetative state alive. It was only a matter of time before he would have to call for help and, most likely, explain why there were two comatose people in his basement.

This was the longest the system had ever locked him out, and even though it had only been a few hours, he knew that every second counted. So far the system had blocked all of his attempts to log in; it had managed to find his backdoor into the system and completely cut off access from there. He cursed himself for not planning out another backdoor or emergency system, though he was aware that no one could have ever foreseen his current predicament.

As he returned to his work, something completely unexpected was waiting for him: a new window containing a single message.

“So, you said the ghost ship disappeared when it hit the island? All right, men, let’s get out there and find it!” said Tom enthusiastically to his pirate crew, who had just anchored the ship near Monkey Island.

“Yarrrr, ye be pushing your luck thar, laddie,” replied the crustiest-looking of the pirates. “We only agreed to follow the ghost ship for ye; we never said anything about helping ye when ye caught it.”

“Aww come on guys, I’m giving you an entire ship—surely that’s worth more than just a ride,” pleaded Tom.

“Aye, ye’d think that, wouldn’t ye. Now, I do believe yer on our ship, matie.” With that, Tom’s formerly loyal pirate crew drew their swords and pointed them at him.

“Right! Your ship! So….I’ll just be going then?” asked Tom, backing away nervously. 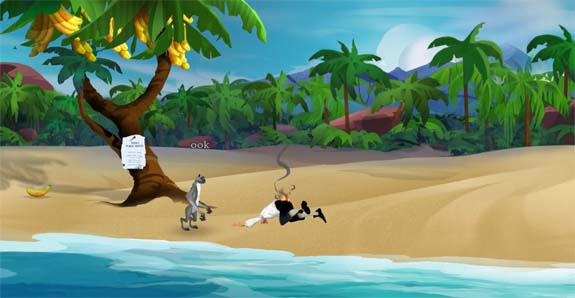 “Stupid, lousy, treacherous pirates,” grumbled Tom as he pulled himself onto the beach. “They wouldn’t even let me have the rowboat to get to shore! Well, I suppose that’s what I get for stealing a ship. And then crewing my stolen ship with a random bunch of pirates. At least I made it to the island. Now to find Alli!”

Tom looked up to see Alli standing above him. “What? Alli? What the hell are you doing here?”

“Duh, the ghost pirate kidnapped me and brought me here.”

“He was trying to get all creepy with me, so I kicked him in his ghost junk and ran.”

“Hunh, and here I was expecting to have some big climactic showdown with the guy and win you back.”

“Heh, you in a big showdown,” Alli snorted.

“I could have a big showdown!”

“Suuuuure you could,” responded Alli mockingly.

“Listen Tom,” Alli said in conciliatory tone, “you know your way around a game or two, I’ll give you that. But let’s face it—I get stuff DONE.”

“What are you saying?”

“We’re going through a bunch of videogames, right? And in videogames, there’s always a big damn hero that gets to have the climactic battle, and that’s obviously me.”

“Uh-hunh. Which is why I rescued myself.”

“I would have gotten there eventually!”

“Sure, and then you probably would have messed it up. Typical sidekick move.”

“Whoa! I am NOT the sidekick!”

“You kinda are. There’s nothing wrong with that, though. Every big damn hero needs her trusty sidekick.”

“But I saved your butt back in Zelda!”

“By arriving at the last second to give you the info you needed to defeat…” Realization suddenly dawned on Tom. “Crap, I AM the sidekick, aren’t I?”

“Guys, can you hear me now?” boomed in Rick’s voice from above.

“Where have you been, buddy?” asked Tom.

“Got kicked out of the system. Back now, but I’ll explain later. Right now we’ve got bigger things to talk about. Try not to freak out, OK?”

“Freak out about what?” asked Tom, though his question was quickly answered. The world around them started to fall away, the trees and rocks melting into pixels that disappeared as they hit the ground. Soon the ground was dissolving into bits and disappearing as well, until there was nothing left but endless white space. As they looked around, Tom and Alli noticed a disturbance in front of them, a mass of purple and brown bits rising from the emptiness. It coalesced into a vaguely humanoid form that became sharper and sharper until it was a large woman with skin the color of chocolate, clad in trinkets and purple robes: the same woman who had used Tom’s real name earlier.

“Hello, children,” she said, her voice still heavily Jamaican, “it’s so nice to finally meet you both.”

Where we're going, we don't need...topics.