Avenue Flo: Special Delivery falls pretty squarely into what I would term the “Marshmallow Fluff” area of gaming. It’s sweet, and relatively insubstantial; enjoyable but not profound. The most successful of these games are those that embrace this characterization and play it up to the max.

Fortunately for me, Avenue Flo: Special Delivery is just such a game. It doesn’t offer any Earth-shattering revelations, and the plot is a little contrived, but I had a lot of fun nevertheless. 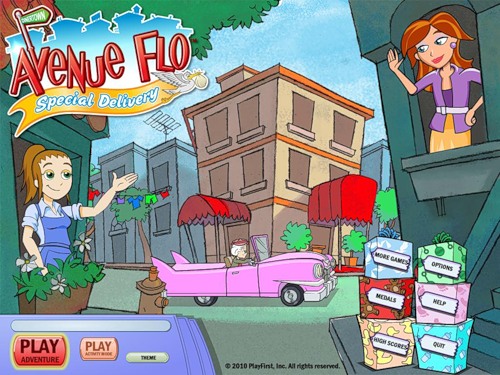 As with its predecessor, Avenue Flo: Special Delivery’s strongest points are its fun puzzles, tongue-in-cheek humor, crazy characters, and easy point-and-click mechanics. I especially liked the humor, which is self-referential and not afraid to poke fun at its own silliness. At one point, for example, one of the characters makes an off-hand reference to the infamous “Singing Chickens” puzzle from the previous game (see my last review for the specifics). Flo quickly dismisses it, clearly indicating that she is all too aware of how ridiculous the puzzle had been, and that she was as glad as we were to see it relegated to the halls of “Let Us Never Speak of This Again.”

Other fun points of the game include the return of the bottle recycling for subway tokens, the addition of some interesting new puzzles (my favorite was the one where you need to do word scrambles to help organize a grocery store), and the introduction of the out-of-town baby superstore, where—as they put it—“We’re crazy about babies, not customer service!” 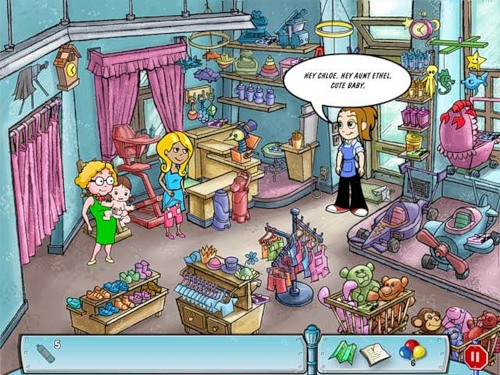 In terms of the game’s weak points, once again, Flo’s roommate Quinn returns as the Queen of the Annoyingly Incompetent. As in the previous game, she provides the impetus for Flo’s quest through her sheer ineptitude as a party planner. (“Oh no, a herd of angry poodles has run through my party and eaten all the refreshments and broken all the presents and got JUICE on my SWEATER! Floooooooooooooooo!!!!”) One seriously questions why she and Flo appear to be best friends. Perhaps it is because Flo is a compulsive “fixer” and Quinn provides her with a steady stream of things to fix. A little dysfunctional, perhaps, but Flo seems pretty used to her antics.

Their relationship does also provide the basis for one of the most ridiculous puzzles in the game, where Flo returns home to her apartment to pick up a new outfit for Quinn. Turns out that Quinn has purchased a new Turbo Closet Organizer, and Flo needs to find the clothes that match the pictures Quinn sent her on her phone. The only problem? Quinn has about six different versions of every article of clothing. I mean, I’m willing to suspend a certain amount of disbelief for the sake of solving a puzzle, but come on! It’s kind of hard to imagine Quinn standing in front of her wardrobe in the morning thinking, “Now do I want to wear the purple ruffled blouse with four buttons, or the one with five?” Then again, maybe that’s not so hard to imagine. After all, it is Quinn we’re talking about here.

The only other part of the game that I really don’t like is the final puzzle. This is partly based on mechanics, partly on premise. The puzzle begins by imposing yet another variation on the Pregnant Lady Stuck in an Elevator Going into Labor trope. To rescue her, her husband has the great idea that they should make a pile of all the baby shower gifts to reach her. Your task is then to create a bunch of stacks using presents of various shapes and sizes. This puzzle requires a bit of finesse, because it has a kind of “free flow” mechanic that causes the presents to spin wildly as you try to click or drag on them. Of course, the game expects you to use this mechanic to stack the presents in a nice, single-file tower. The towers are pretty obviously unstable, and one wrong click sends them flying all over the place. This is annoying in and of itself, to be sure; but once again my Reality Check sensor was also buzzing. “You’re telling me,” it said, “that they intend to rescue a pregnant lady from an elevator hundreds of feet in the air using THIS? They are almost certainly going to get her killed! Couldn’t we just wait for the freaking fire truck???”

In spite of these flaws, I will candidly admit that I enjoyed playing Avenue Flo: Special Delivery. It is a fun, breezy game with only a few minor detractions. It is just about the right length and challenge that you would expect given the game’s price point (which is about $6.99). If you’re looking for a Marshmallow Fluff game to while away a few hours on a slow night, definitely consider picking this up!