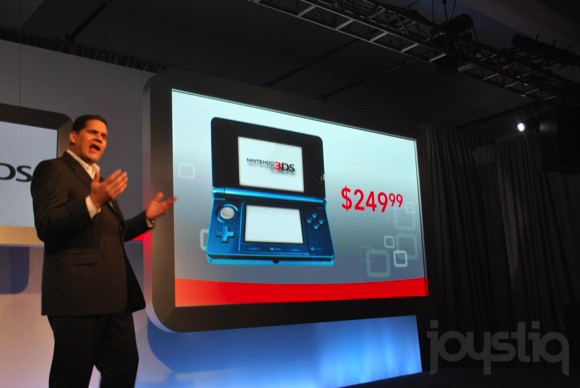 At a press conference today in New York City, Nintendo revealed the North American launch date and price for its upcoming gimmicky portable: March 27, and $250.

The release date lines up with what we’d been hearing previously about the system, but the price is actually a little lower than the rumored $300. It still seems pricey for a console whose biggest upcoming title is a 3D port of Ocarina of Time, though. (Then again, it doesn’t seem enough for the system that’s going to house Professor Layton vs. Phoenix Wright!)

Launch titles for the 3DS (per Destructoid) include:

Additionally, Nintendo revealed that the system’s launch colors will be black and blue (perhaps a metaphor for what will happen to people trying to buy one in-person at launch?), that online play will only require one Friend Code per system (rather than per game), and that the 3DS will have a Wii-like Virtual Console of Game Boy and Game Boy Color games. Nice! Is it to much too hope for a port of Fish Files?

For more on the press conference, check out Joystiq’s coverage here, because we weren’t invited.

What do you think? Does $250 sound like a reasonable price? Are you pre-ordering the 3DS on Amazon right now? Or are you waiting for the inevitable smaller, sleeker, better, and cheaper version that Nintendo will announce the day you buy your original 3DS?

If there's any more people around, when the games run aground, then we'll meet at the end of the games.