Kids these days and their YouTubes and their Vice City mods. In the video I’m about to show you, we see some Marty McFly-like character in a plain red shirt driving around Grand Theft Auto: Vice City in a DeLorean.

The DeLorean itself looks pretty true to the movie and has the nice vertibird-style door. But if this is supposed to be a tutorial video, why does it take the guy nearly three minutes to get the vehicle up to 88?  What the crap is up with that? Marty then travels back in time to (a fairly modern-looking) 1955. The lightning rod is attached, the car is driven up to 91 mph (huh?), and then the car disappears under a blue beam. What happened to the lightning bolt?! I guess it’s cool that you can recreate that scene (albeit poorly), but why not have a cooler-looking 1955, or why not let me go to 2015 and get a hover conversion? No clock tower? No Doc Brown? Hey, do you guys remember that part in Back to the Future where Marty drove over a guy, and you could see the blood streaking on the road from the tire? Must have been a deleted scene. 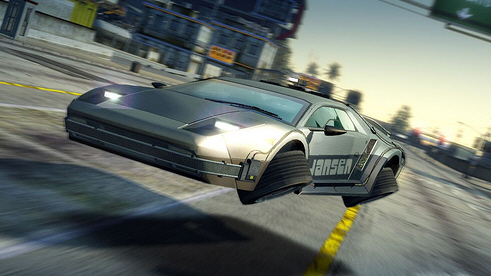 Burnout:Paradise got the DeLorean just right, complete with hovering and burn trails from boosting.

Warning: the description for this video is in Spanish,  but luckily the instrumental background music isn’t. I did hear someone shout something in Spanish in Little Havana, though.

Also, when searching for “88mph,” I came across this little factoid: 88% of lost wallets that have pictures of children are returned to their owners. So you know what to do: Print out a picture of  Baby Mario and put him in the front of your wallet. Of course, they’ll also have your license, and that has your name and address; but I’ll leave it up to you.

...but it's still a beautiful-looking game, and it's still bringing the maxxxtreme co-op action, so hey, who can complain? Check out the latest trailer for the sequel to 2009's Best Downloadable Game: