In this review, we introduce “Meteo’s Dichotomy,” a newly formalized principle of heuristical hypothesis for the asymmetrical academic appraisal of all information mediums where, in the event of cross-examination, considerable time is spent deriding the credibility of the subject only to arrive at a philosophical thesis statement and outcome that is the opposite of the argumental body.

If that isn’t confusing enough, consider the massive contradiction our culture lives in as it reveres its classics of literature, film, and…umm…I guess “interactive entertainment” (since there’s no smarmy academic word for “videogames.”) We live in an age where we claim to be huge fans of long-running series, only to show our appreciation by bitching about every NEW incarnation that comes out on GameSpot and OC ReMix in grossly thick prose that makes you wonder why this Burger King fry cook could not get a job as a senior professor with all the detail he can articulate and the big words he can use on the Internet.

Still not confused? How about this sentence: “I’m a HUGE fan of the Sonic series, just not the last 17 games they’ve made.” Does that make any sense? 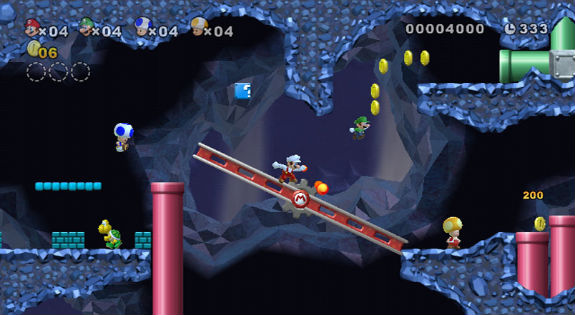 It used to be that series fans hated still sold very well, somehow. (If that sentence doesn’t hurt your head, you need to call 911 immediately. You might have only minutes left to live). This is no longer the case. Now, companies scramble to revive series in the vein of the old-world videogames, which I’m personaly thrilled about, only to still find mixed success as fans find out what I’ve been telling them for years—FANS DON’T FUCKING KNOW WHAT THEY WANT.

Nintendo even jumped on the “neo-retro” bandwagon with the flagship character of not only their company, but the videogame industry itself since history began. Mario is back in 2D, and the results, in all honesty, are confusing—because I’m going to spend several paragraphs bitching about it before I arrive at the score of 8/10.

Mario can do anything, ANYTHING (except pinball, surprisingly), and he has done everything in his immortal career. He’s done more in 25 years as a fake character than 100 real people do in 100 years. He has absolutely nothing to prove, yet Nintendo, listening to cries of the whiners who bank their payroll (like me), decided Mario needs to prove he can still do 2D. Now we have, not Super Mario Bros. 4, but NEW Super Mario Bros.

If we have learned nothing else throughout history (and if you’ll take a look around, we sure as shit haven’t), it’s that the addition of “new” to anything established in our lifetimes will go under a specialized scrutiny of credibility (see list at the bottom of this review). No one wants NEW; they want OLD! But they already bought OLD! But they want NEW! But they know they’ll hate it! But they look forward to it anyway!

Thankfully, NSMBW is based more on Super Mario 3 than the first NSMB was, but it still feels like a considerable minimaliization of content, and as epic as Mario has become, this is a problem. Trust me, I love to see Mario back on simple run-and-jump mechanics, but it still feels far more closed off than it was 20 years ago. Mario has always done its best work when it mixes the Mushroom Kingdom with far-out, spacey, surreal shit (Super Mario Paper is probably the best more recent example of this in a 2D form), when the designers just let loose, but it’s not until over half the game is over before you really feel like anything is let loose in this title.

NSMBW is just too easy for most of the game to reach the highs it used to. Nintendo has been hand-holding players more and more for years now, and because they want to induct new young members into the Nintendo fold, I can see why, but c’mon…is a HARD difficulty setting too much to ask for? (Although, be careful what you wish for, since you might get something as hard as Yoshi’s Island DS—yikes!). In this game, you can have up to four players simultaneously, and you can unlock videos that show you how to do stuff—even how to beat a level. On a HARD setting, this would be nice, but I could’ve beaten this game when I was eight.

On the plus side, this game DOES get better as it goes on. Each level is better than the one before, and the game just builds and builds until you get a really classic-feeling showdown with Bowser himself. The Koopalings are back, too, and they’re still so easy you have to really question Mario’s motives for fighting children; but they’re in their most creative forms since Super Mario World. The boss fights with Bowser Jr. also get pretty good, but sadly you almost never have to do more than hit him three times to beat him. 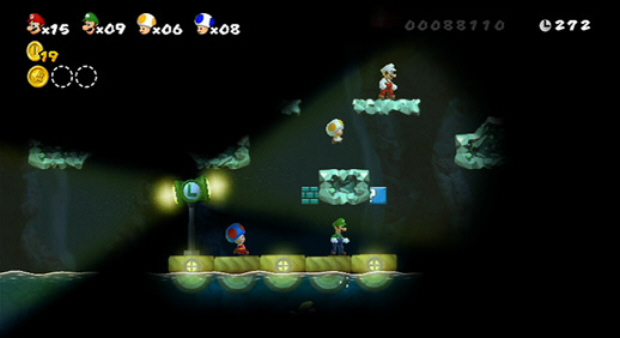 The dungeons are also a bit disappointing, hitting mostly on old stuff the series has done before, instead of really showing what the game’s got like 3 and World did. The best levels in this game all revolve around HUGE stuff and shapes. There’s some cool quasi-gravitational stuff in the game, too, lots of hidden passages and some really well-disguised alternate paths, a bunch of level-exclusive ideas (desert hurricanes, lantern fish, etc.), and a much-improved overworld system that references (rips off) Super Mario 3 pretty well—so the Nintendo gang behind this one really put some effort in. But it still feels like it only would’ve been really new and awesome in 1989.

Also, I was totally not digging the waggley controls.

Nevertheless, I’m still giving this game an 8/10. Why? Because, contrary to…shit, I don’t know what my point is either, but the fact remains that this game is still worth playing despite all its flaws. 2D Mario on a modern console? You CAN’T lose with that, even if it’s inferior to the originals.

Still confused? Maybe just play the fucking game yourself, and you’ll feel it better than I’m able to explain it to you. It has flaws, it’s too easy, and it’s kinda lazy, but I still had a blast.

Oh yeah, here’s my list of “new” things that people have bitched about (from bad to good):

In 1985, Nichibutsu released an arcade game that brought something new to the shooter genre. The game was MagMax, and it was remade for the NES in 1988 by FCI, which was responsible for the Ultima ser