You probably have a bunch of games you’ve never completed. Sometimes, you just get that itching to go back to them and finish them for good. Sometimes it’s because you’re reminded of them through conversation, music or reading a book. Other times, it’s because the game literally jumped into your lap and demanded to be played with.

That’s why I just finished playing Pocky & Rocky 2, a Japanese side-scrolling top-down shooter that makes itself sufficiently different from others in the same genre. By shooter, I wish not to imply that the game contains manly men, chainsaws or aliens. Because it doesn’t. In fact, that would irrevocably spoil the game, especially if those men started to lose their clothes when they take damage.

The way Pocky 2 avoids being a pure shooter (on-rails) is by giving the player free-movement, switching the sh’mup genre to a slightly more The Chaos Engine approach. Imagine Guwange without the screen scrolling (and if you know what Guwange is, you’re a cool guy). The most similar game to this style released recently would be Nier, for the same reasons. 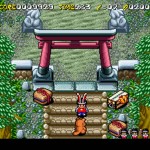 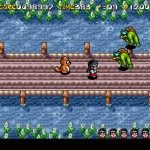 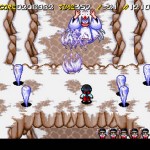 But even though there is exploring in Pocky & Rocky 2, it is extremely limited, and the levels are still very much linear. Having access to your character’s feet (instead of floating or flying like in Touhou or just about every other shooter) just makes the game feel less like a shooter and more like an action game, even though it is very much still grounded in the world of Gunbird in terms of game mechanics.

The main character, Sayo-chan (or “Pocky,” outside of Japan), has two attacks that she can use. One is to throw magical cards (which combust on impact, similar to Gambit from X-Men). The other attack method is to wave a demon-warding stick, which is a one-hit KO on most enemies (but killing them this way means they don’t drop any spoils).

As you navigate around each level, you encounter power-up items that help you in some way. “Charm” increases the number of hits you can take before you lose “Courage.” “Charm” is represented by the layers of clothing that Pocky is wearing.

“Courage” is slang for an extra life in Pocky & Rocky 2, and losing one causes Pocky to slump down and cry. I’d probably lose “Courage” too if I were suddenly stripped of my shrine maiden’s outfit. Not that I have one. 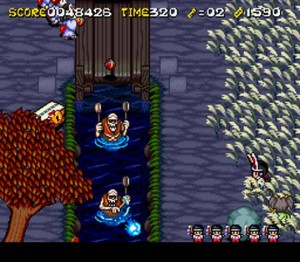 There is also “Power” to obtain (represented by a crystal ball resting on a napkin), which makes your magic cards slightly stronger and much larger, so that they can hit more. As you are hit, and lose “Charm” (which as we ascertained earlier means Pocky’s clothes), you also lose “Power.”

“Rabbit Ears,” which can be found or bought from a store, allow Pocky to take one extra hit before she loses any of her clothes. This means the Rabbit Ear power-up can be seen as both helpful and obstructive, depending on your viewpoint. Besides health-related items, there are also keys to collect.

Each stage has up to three bosses. There’s less than ten stages, and the game takes anywhere from thirty minutes to an hour to complete. The story isn’t up to much, so you play the game for the amount of “fun-ness” that it offers (and the loss of clothes). As it’s just another shooter, in a very long line of shooters, in the end it’s just another game for arcade fanatics.

Fine by me, though. Just playing as Pocky ♥ is enough for little ol’ me. 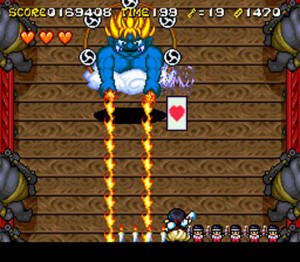 Should you buy Pocky & Rocky 2? No. It’s bloody expensive. You will not see it in your local gaming store. This game is rarer than hair on your father’s head. Only collectors will benefit from owning this game.

It’s a challenging little number, playable co-operatively with another player, but considering the rarity of this game, you will never want to play it, to keep it in the best possible condition, forever.

That kind of mentality sucks, though! The soundtrack is gorgeous. It is something you just have to give a listen to at least once. As a matter of fact, Pocky & Rocky 2 is totally worth playing. My only prayer is that the Virtual Console finds room in its heart for this swell little shooter.

"Dancing," they call it. It's more like smashing your feet really hard on a metal box in time with arrows that are barely in time with the music. The spacing for your feet on the dance machine is awfu