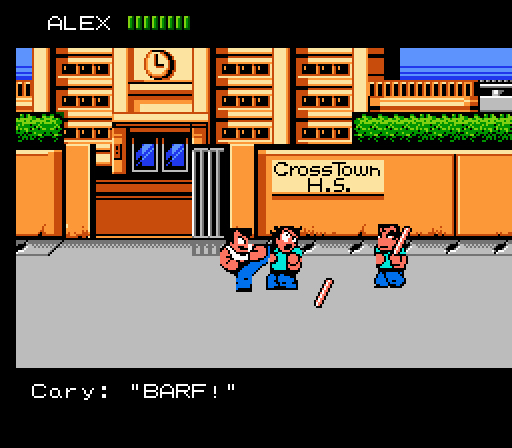 It’s a good thing I included this screenshot; otherwise
my headline might’ve come across as kinda gross.

I can’t believe this is an actual post that I’m writing in 2011, and not just a hilarious prank that’s being played on the River City Ransom fan community (…such that it is, anyway. Fun fact: Solitaire has more fanfiction on FanFiction.net than River City Ransom. Yes, that Solitaire.).

Anyway, yes! According to Joystiq, there’s an honest-to-God new River City Ransom game coming out this summer for undisclosed consoles, and next year for the PC. It’s being developed by Miracle Kidz, which is made up of some of the original  game’s developers. There aren’t many more details available right now, but personally, I’m stoked. Not because I’m a big RCR  fan, but because, finally, I can get the taste of River City Rumble out of my mouth:

I mentioned this on the GameCola Podcast recently, but what's up with Super Mario Galaxy 2 and its insistence that Mario and Peach are a romantic couple?  I mean, look at the dialogue options you ha