When I was a little girl, my dad took my little hand in his, looked me affectionately in the eyes and said…”Holy shit you have some serious workman hands! I’m gonna call you Stumpy!” It wasn’t the nickname I was hoping for, but the man had a point. My hands have never been the graceful, feminine specimens you see on moisturiser adverts—they are more the short and stumpy kind, with a hint of spare-tyre at the base of the pinky. My sturdy dwarven hands do have their perks though; they have enabled me to excel in, for example:

Unfortunately, they also make me bad at things like: 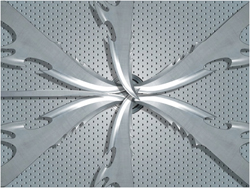 Slice HD is a new game from developers SmallBall, in which your goal is to press a button that has been conveniently obscured by some sharp knives. The player must slide these knives away from the button with serious care, ensuring that the blade-edges are avoided and that none of the knives are accidentally released. A slight slip of the finger, and you get an unnervingly realistic blood splatter across the screen and the grating sound of flesh being sliced up. In other words, this game makes you constantly shit yourself.

Some of the levels contain six or seven knives, so you have to be quite digitally dexterous and have good reflexes and a strategic mind to get through them. I’m about as tactical as a potato, however, and I proved this in one of the levels by successfully removing the knives from the button but forgetting to leave a free finger to actually press it. I got around this by licking the button…at the precise moment that my boyfriend walked in the front door. In an attempt to prove to him that I do not have covert oral sex with my iPad while he is at work (much), I let him play a level and he was instantly hooked—impressive, considering that he will only play a game if it has the word “epic” in the tagline.

I enjoyed this game; it made me swear, jump, and laugh a lot whilst playing it, to the point where even my dog was looking at me like I was mental. (This is the same dog who spends half the day eating his own ass out and the other half licking the bedroom wall.) The HD graphics enhance the sharp, clinical atmosphere with no fluffy clutter in any of the levels—just steel knives and red buttons. The blood spatters and sound effects are realistic enough to slightly gross me out, and the game has achieved that difficult balance between frustration and desperation that makes me say things like “I am gonna throw this thing out of the fucking window…right after I get to the next level.” 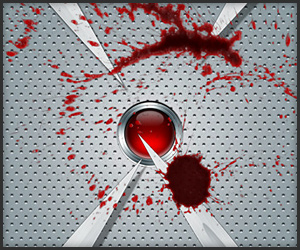 In saying all these lovely things, however, there are a couple of areas that I am not entirely delighted with. First of all, there is no homescreen. I never thought I was so emotionally attached to homescreens until I was brutally denied the right to have one. When you press the icon to open the game, it goes straight to the first level! Crazy! There’s no page offering the option to view instructions that you will never read, nothing to take you to the leaderboard via a button that you will never press, no hello, no nice music—maybe I don’t need a homescreen, but God damn it Charlie, I want one! If nothing else, it gives you something to look at while you prepare yourself to start the game: drink some juice, pick your wedgie or get naked and rub yourself with lard.

I’m also not in love with the idea that, until you reach level 15, if you fail a level you have to repeat the previous level, and if you fail that, you go back a further level, and so on. This means that if you become particularly crap at the game or experience a sudden onset of Parkinson’s Disease, you can go from level 12 to level 5 in a matter of minutes. This isn’t really necessary, because the game is good enough to play straight through. I remember the days when this format was very popular and repeating levels was a staple characteristic of a lot of games, but we have moved on since then, and I think games are better for it. Developers now have to be a bit more imaginative in order to keep us motivated and, as is the case with Slice, repetition can sometimes interrupt the flow of the game rather than enhance its playability.

Despite these slight drawbacks, this is a highly entertaining and addictive game. It is minimalistic but clever and, although unique, feels a little like the traumatised, yet flexible, love-spawn of Operation and Twister. Kids will especially love it as there are blood spatters and scares galore, but there is also plenty of fun to be had by “adults” like me, no matter how stumpy. If you are looking for a cool way to give your fingers and brain a simultaneous workout, step away from Stephen Hawking’s nether regions and buy Slice—yours for a mere $1.99/£1.79.

My initial thoughts on Monster Hunter 3 Ultimate including bagpipes, snuggling pigs, and the biggest monster of all—the camera.