Wow, that’s surprising. You’re not one to enjoy my company…or the company of anybody, to be honest.

I THINK YOU KNOW EXACTLY WHY.

Oh, because you said you’d be swearing like no tomorrow?

Well, I doubt that nonsense is suitable for this month’s game.

I’m afraid I didn’t bring you anything obscene this time. Today, I bring you an arcade game called Magic Bubble. 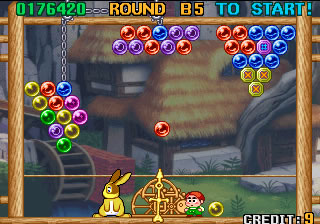 Nope, just a regular bubble that you pop. I’m sure most visitors to this site know all about the Bust-a-Move/Puzzle Bobble series, that now legendary puzzler where you have to use a little shooting device at the bottom of the screen to pop coloured bubbles into the playing field and try to connect matching colours to make them disappear until all bubbles have been eliminated. Magic Bubble, courtesy of Yun Sung, was released in 1990 (actually predating the original Puzzle Bobble by four years) and follows the same premise, even up to the same sound effects as used by Taito four years later! That’s right—methinkst Taito has committed plagiarism! GAMING plagiarism!

It’s not entirely the same, though it’s mostly the same. One of the major differences, aside from the distinctive lack of those cute dinosaurs, Bub and Bob, is the implementation of a scale system, where a pulley balances two initially equal bunches of bubbles. Pop some from one side, and the other side falls closer to the bottom (increasing your chances of level failure unless you even things out). It’s a neat system that could make or break you, depending upon your skill.

As well, the game boasts–

WHAT THE FLYING FILETS?!

Is there a problem?

YOU BET YOUR SWEET FILETS THERE’S A PROBLEM! I CAME HERE EXPECTING OBSCENITY AND ALL YOU GIVE ME IS AN ADORABLE PUZZLE GAME? C’MON, MAN, GIVE ME SOMETHING HERE! I HAVEN’T HAD A GIRL OVER IN AGES, AND I NEED SOMETHING WITH A BIT OF PANACHE, IF YOU KNOW WHAT I MEAN!

WHAT’S SO FUNNY, YOU BEANPOLE MAN-TOAD?

OK, OK, I’m sorry. I’ve been toying with you a bit. There’s actually an ADULT version of Magic Bubble as well where, after completing a board, you get to reveal a picture of nearly unclothed women doing various things.

YOU BETTER HAVE BROUGHT PICTURES! 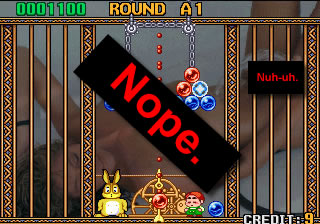 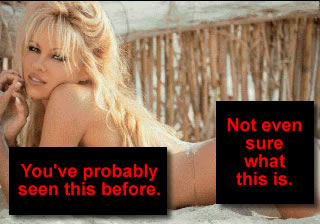 So I was trying to come up with an idea for Dear Readers, and I thought to myself, "Wouldn't it be great if I could melt people's faces together? To create one freak-face?"