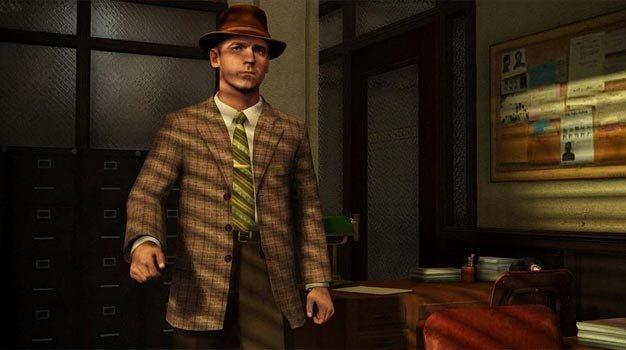 In production since 2004, Rockstar Games’ L.A. Noire has been teased for so long that it looked like it was about to dissipate into a cloud of vapor, never to be released.  That is, until 11/11, when Rockstar and Team Bondi released this new all-gameplay trailer of the game.

The game promises to allow the player to solve murder mysteries in an open-ended world. I remain hopeful that this game will require you to do actual police work, interrogation, and mystery solving, but since Red Dead Redemption was essentially just Grand Theft Horse, I have a feeling I know how this game is going to play out.  You’ll be put into 1940s L.A. with 2/3 of the city blocked off by police barricades until later in the game, and the mystery-solving part will consist of doing missions for contacts you meet around the city. On the way, you’ll be able to do menial tasks for people on the street and listen to period-appropriate radio stations in your car.  You’ll also be able to shoot whoever you feel like with Tommy Guns.

Hopefully it takes the awesomest-game-ever route and doesn’t become Grand Theft Auto Clone #28.  We’ll see how it all pans out. Until then, I’ll be playing the FMV adventure game Noir: A Shadowy Thriller to fill the void.

Hey, everyone! Just thought you might be interested in getting a sneak peak of The GameCola Podcast's new theme song, "Five is Average." It's by 12 Followers/Meteo Xavier (known 'round these parts as