Anyway, Layton fans know all about this game, because it was released in Japan in 2009. It’s about a town that is haunted by an evil specter, who is controlled by a flute. It’s a prequel to the Layton series, and it completely ignores the cliffhanger ending to the previous game.

Probably the most exciting part about this game is the fact that it stars a new main character: Emmy Altava. 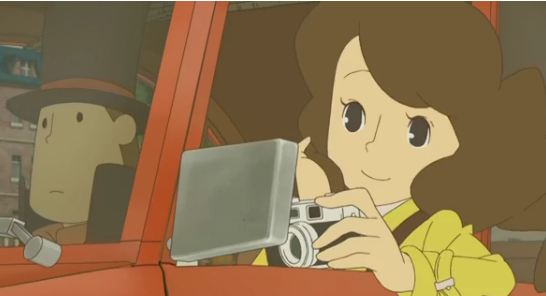 She is Professor Layton’s apprentice, she drives a cool motorcycle, and she appears to have ninja fighting skills. And she wears a bow tie. In other words, she is supposed to be all kinds of interesting. I get the sense that they specifically created Emmy for the purposes of replacing Flora as the main female character in the series.

Emmy’s name has not been officially confirmed. I mention this, because they have changed the name of the game itself (previous name: Professor Layton and the Specter’s Flute). So don’t get too attached to the name Emmy Altava. It could be that, in the final game, she’ll be called something like Emily Hunter. Fanfiction where she and Professor Layton fall in love are expected to be written about one month after the game’s release. No, wait, scratch that. Layton/Emmy stories have already been written.

No release date for the game has been announced yet.

The game isn't bad, but did it deserve the Readers' Choice Award? Meowskivich's take.