Breath of Death VII and Cthulhu Saves the World are the first two games by indie developer Zeboyd Games, and they’re now available in a double pack on Steam for the low, low price of $3.00 (you can also buy them individually for $3.00 each, but that would be just silly). Both games are retro-style RPGs set in the style of the classics, (i.e. Dragon Quest, EarthBound, etc.), and bring back memories of the old days of NES and SNES gaming. BoDVII is set in a fantasy world that has arisen from the ashes of an Earth devastated by war, where humanity has been replaced by the undead as the dominate species on the planet. CStW follows the adventures of the Old One Cthulhu who, after being stripped of his powers, must journey the world and become a true hero in order to regain his might (and therefore be able to destroy the world). The games are incredibly similar to each visually, musically, and structurally, so much so that the two are almost the same game, save that CStW is longer and boasts a larger cast of characters. 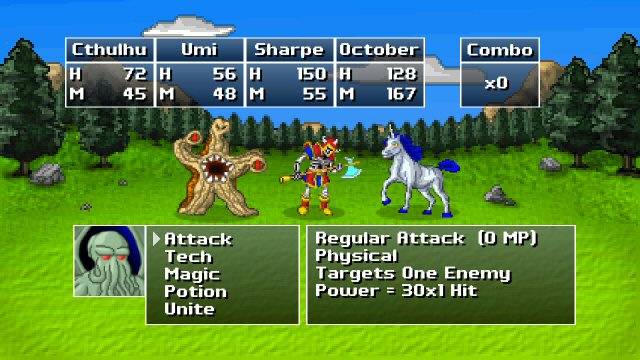 16-bit graphics are the name of the game here, scaled to properly fit modern HD screens (16 bit in HD, that will NEVER make sense to me). Both games have players moving small sprites over a large overworld, switching to a classic close-up view of the enemies for battle. Both games are also very colorful and capture the visual spirit of old-school games very well, and the same can be said of the music as well. 16-bit melodies match the visuals and add to the air of nostalgia surrounding the games. The games come with some pretty cookie-cutter features of old-school RPGs: finding and equipping new weapons and armor, characters with individual physical techniques and spells, boss fights at the end of each dungeon, and so on, so both games should be pretty familiar for most people playing them. Players can expect to get about 4-6 hours of gameplay out of BoDVII and about 10-12 out of CStW.

Though both games are both pretty standard old-school RPGs, the creators do employ a few features in the games that make them unique among the genre. First, while the games do feature random encounters in dungeons and on the world map, each area has a counter that decreases with each battle. When the counter is depleted, the area becomes an encounter-free zone, allowing players to explore unhindered. It is still possible to fight enemies in the area, but it must be done manually from the pause menu. Leveling up is also new and different in these games, as each new level allows players to choose between two bonuses that will increase the parameter of characters in different ways. For instance, in one case players might get to choose between a bonus to strength or a bonus to speed, while in another they might choose between healing spell enhancements that can either cure status ailments or cure more HP, and in still another case they might choose between receiving a new physical technique or a magical spell. It’s a great little feature, and provides both something to look forward to at each level and a nice bit of customization not typically seen in old-school games.

Another fun innovation is the challenge level that each battle poses to players. All hit points, status, and a few magic points are restored at the end of each battle, but the flip side to this is individual battles can be extremely challenging. It’s not out of the ordinary to win a battle with only half of the party members still standing, and even they might be nearly dead. Additionally, monsters grow stronger during each round of battle, making the need to dispatch with them quickly incredibly important. Instead of hording MP and items, each battle requires characters to use the full extent of their abilities or face destruction. It is a great way to keep players engaged in a battle format that can potentially get pretty dull after a while and encourage experimentation with each character’s abilities. Additionally, CStW provides an extra mechanic to play with in battle: As is only appropriate, Great Cthulhu can drive his enemies insane, causing their stats and tactics to change, as well as giving them a gnarly new appearance. Sometimes causing insanity is the best way to win a battle quickly, as it will cause enemies to take more damage. Other times, it will prompt enemies to use attacks that will devastate your party before you can react. Either way, it’s a nice feature and just one more method the creators use to keep players on their toes.

While the battles are generally very interesting, exploring the world can (unfortunately) become rather tedious. The overworld and dungeon maps are very simple and not particularly stunning, only featuring navigation from the classic “eagle eye” perspective. The dungeons in BoDVII are very straightforward, with few alternate routes, and players can reach the dungeon goal in a fairly small amount of time, which is a small mercy given the nature of the dungeons. CStW provides the same type of dungeons, but with multiple levels, making the number of twisting branches, loops, and dead ends quite large. There’s no way to track exploration in-game, so this type of layout can have players walking around in circles while trying to find one out-of-the-way treasure chest or staircase, making the dungeons very frustrating in the long run. In this way, BoDVII actually provides a better dungeon experience than its counterpart by providing a more streamlined experience that puts more emphasis on the new and fun parts of the game (battle and characters), as opposed to the antiquated exploration mechanics. 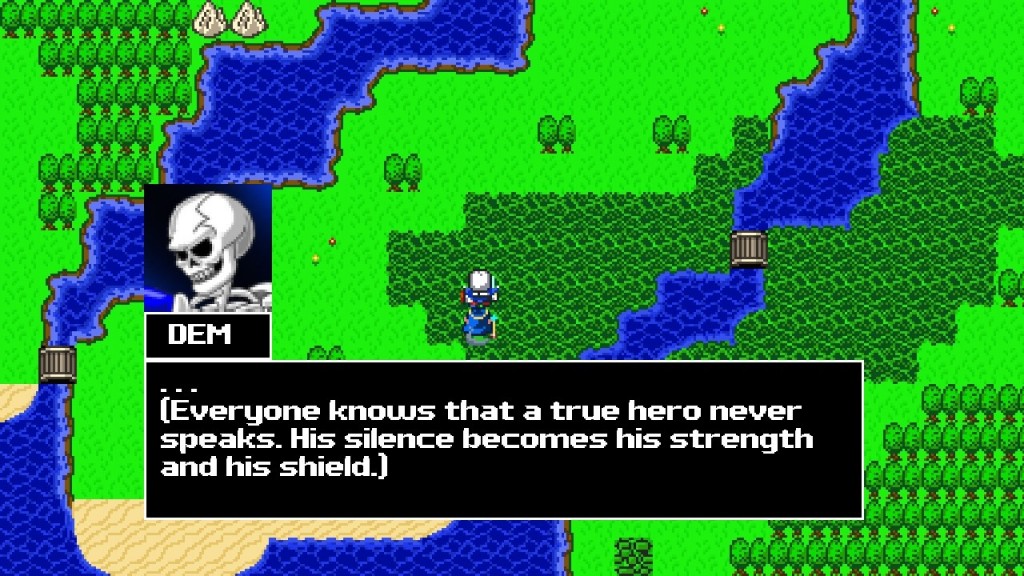 No review of these games would be complete without covering the comedic aspects of the games, and there are plenty to talk about. The games are as much a parody of retro RPGs as they are an homage, so players can expect numerous references and jokes about old-school games, especially in BoDVII. Comedy in CStW comes mainly from the fact that the Cthulhu is now very weakened and thoroughly miffed about it, and the former Great Old One is constantly heard griping about how much he wants to kill everything, the prejudices the “noble” zombie faces, and how stupid the narrator is. For me, most of the jokes were pretty funny, but they did eventually wear thin due to the sheer number of similar-sounding quips. If you’re the type of person that enjoys riffing on old movies or loves puns you’ll probably enjoy the humor in the games; but otherwise, they might get annoying pretty quickly.

Breath of Death VII and Cthulhu Saves the World are both pretty good games, but certainly not without their flaws. They both capture the spirit of retro RPGs well, but CStW in particular can be accused of doing it too well by preserving some of the less pleasant features of old-school games. Still, the games have shown that Zeboyd has a lot of potential, and I’m looking forward to see what they come up with in the future. Plus, three bucks for two games isn’t too shabby, and when you factor that into the equation, these games become quite good indeed.