Here’s the movie-based videogame that nobody wanted, or expected! Prepare to be sickened, amazed and bewildered by Little Nicky, the game where you can play as the son of Satan himself!

The movie this game is based on has a Metacritic score of 38/100. If you saw Little Nicky and thought “this film needs a videogame adaptation,” then you are quite simply a fucking idiot. There is absolutely no way that this movie could ever result in a brilliant videogame adaptation, because there is nothing to adapt! What parts of the film could be realistically turned into excellent gaming moments? Digital Eclipse, why must you always muck in my mud? 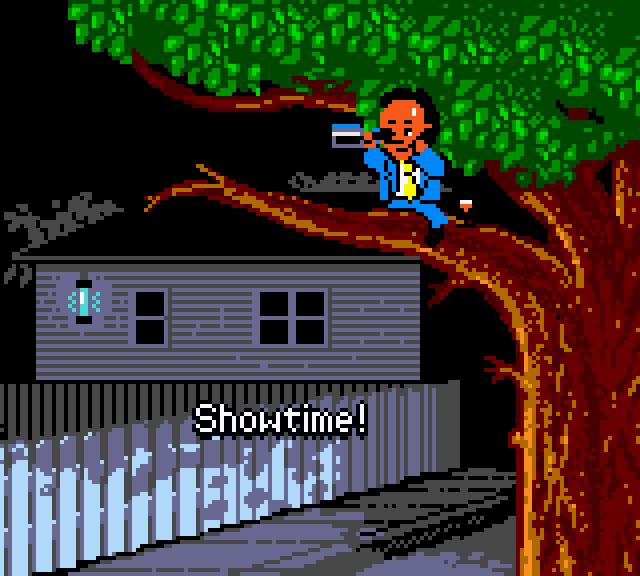 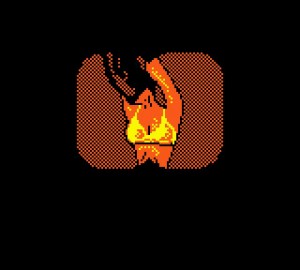 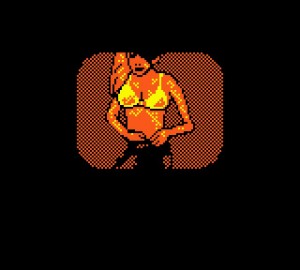 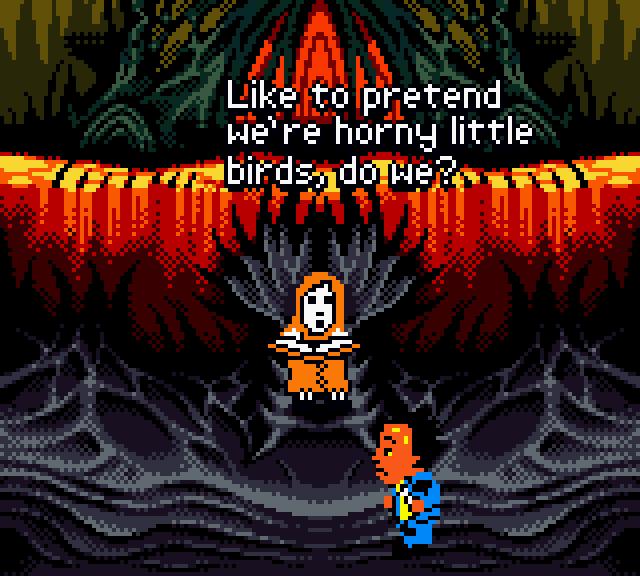 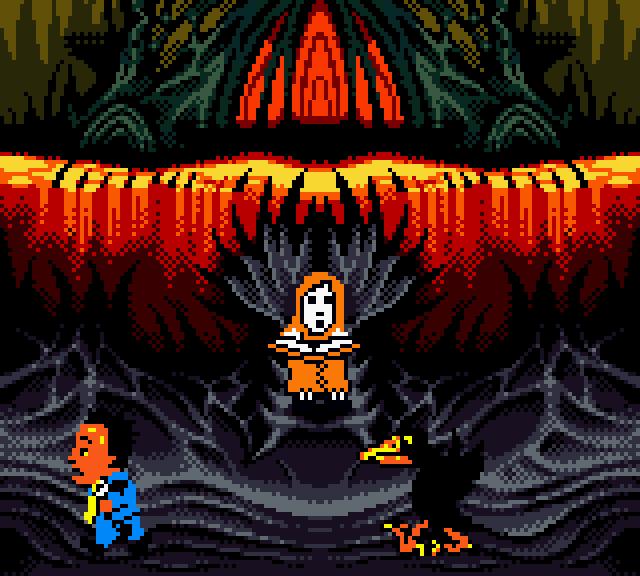 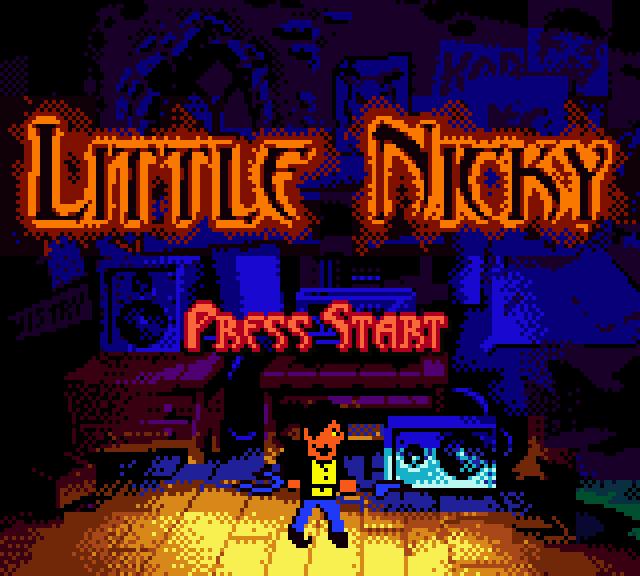 So far, so awful! Here we see Little Nicky jumping around, playing a guitar. A guitar that looks particularly thin and flimsy due to the game’s weak graphics. Look, I wasn’t going to say anything, but all the production costs and time went into producing the video of the woman stripping.

Before we tackle the game, there are some minigames included, so you get to feel even more disappointed. These are shoddy and uninteresting bonus games that don’t serve any particular purpose other than to make it look like effort went into this game. If effort did actually go into this game, then I’m truly offended. 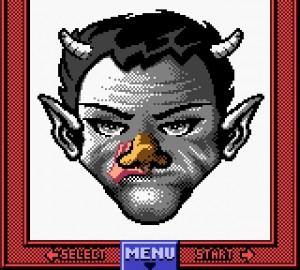 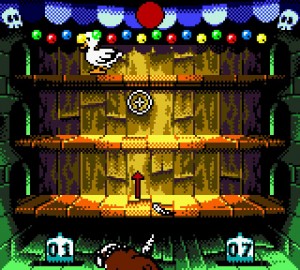 There are five of these miniature abortions available. The one on the left is a “make your own Satan” (not the official name) game where you can add features to the Lord of Hell’s face! Dress him up however you like. This puts Imagine: Light Bringer to shame. The second screenshot is one of the main cookie-cutter minigames, starring the talking dog from the film. You have to shoot chickens, because it’s the most tenuous link to the movie’s fried chicken jokes that the studio could muster.

Every time you quit a minigame, you are returned to the game’s splash screen. This then bleeds into the cutscene I’ve showed above. You have to skip about six parts of cutscene every time you want to return to the actual title screen. Now keep this in mind: every other game that does this on the Game Boy Color is a pirate game. Digital Eclipse is not helping their cause. 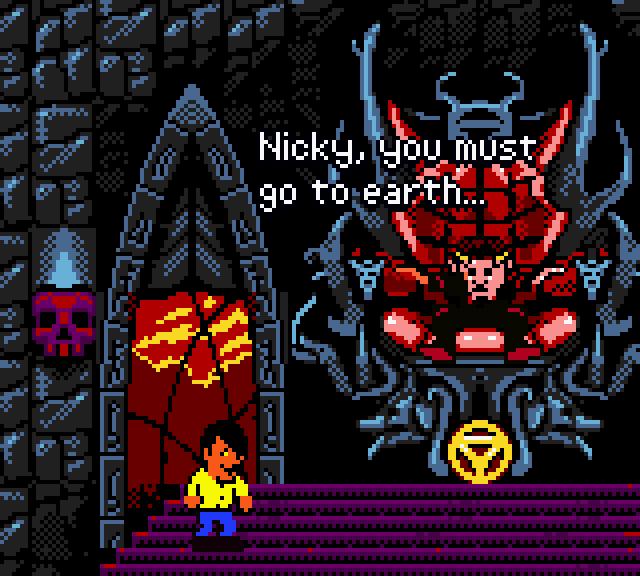 The story of the game somewhat mirrors that of the film. Nicky has to go to Earth to capture Cassius and Adrian, his two brothers, who have decided to create their own hell there. Meanwhile, due to their actions blocking the gate to Hell (somehow), Nicky’s father Satan slowly deteriorates. 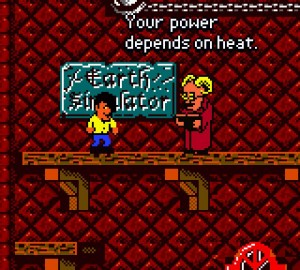 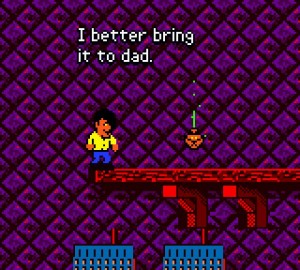 You visit the Earth Simulator, set up by Satan so that Nicky can experience http://en.wikipedia.org/wiki/List_of_Ice_Age_characters#Sidwhat the big blue realm is like. This is the first time that you actually get to do some proper platforming, and you soon discover that this game is almost impossible to play. The controls are like trying to ice-skate in a tub of lard. Nicky’s jump physics are truly horrendous, and you can barely control where he lands. He moves slower than Sid the Sloth when walking, but as soon as he collides with fire he suddenly zooms through the level by himself and runs straight into life-sapping obstacles. 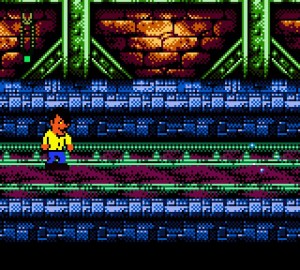 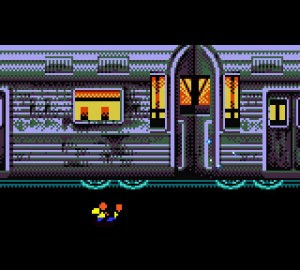 When you finally start playing the game, the brunt of the problems becomes apparent. Little Nicky is nightmarishly difficult due to enemy and hazard placement combined with horrid controls. If this wasn’t enough, it’s also one of those games where you have to try to memorize everything before you can actually complete any level.

Obstacles are placed in the ideal locations to squeeze your health, such as the electrical shortages throughout the first level. Once you make your way past that apocalyptically dire stage, you reach the second level. In this level, the lights go out and you can’t see the stage. Also, the occasional train passes by and kills you on direct collison.

Yes, I appreciate the joke that, in the film, he goes straight to Earth only to die in the first twenty seconds, but the game didn’t have to be so true to this fact. The difficulty here is cruel. Not to mention these graphics make me want to hurl, especially Nicky’s. His walking animation has this hideous slant, like Adam Sandler is auditioning for the Hunchback of Notré Dame. 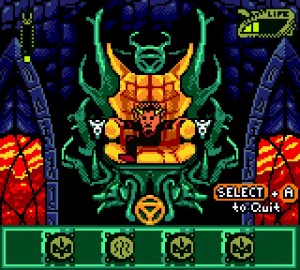 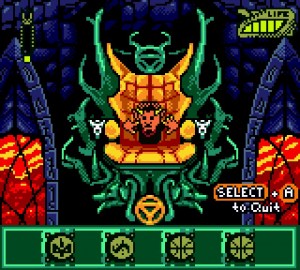 Every single time you pause the game, you get ridiculed by Satan for doing so. With each life that you may so easily lose, Satan deteriorates further and loses more of his body. If he runs down to nothing more than his hand, the game is over. The passwords generated on this screen also take into account how many lives you have left. Now that is cruel.

I couldn’t complete the second stage, so I had to make use of passwords to see the whole game. What, I’m a cheater? If you’d like to sit through this game instead, that can be arranged. 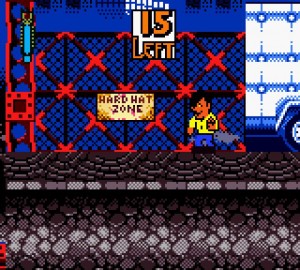 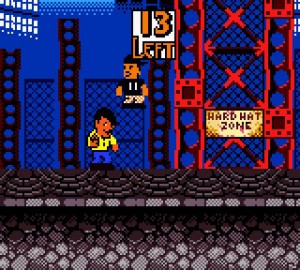 Because Cassius and Adrian (apparently) have the ability to possess other people, the requirement to complete Level 5 is that you walk around and try to force people to enter the flask. When you do, they just float upwards and disappear, as shown in the screenshot above. Some of these people you use the flask on become devils, which you cannot harm. They can drain your life very quickly if they walk into you. What you need to do is use the flask, and then run the hell away, just in case the game decides to make that person become a devil. You need to flask everyone to continue.

In this level, the game was almost playable for a second. Maybe even almost…fun. No, that’s too far. The game is anything and everything but that. 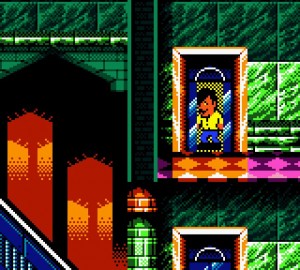 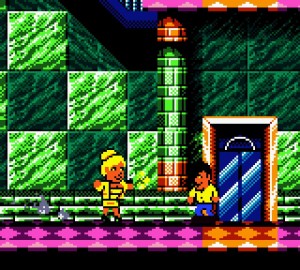 Level 6 sees Nicky in what appears to be either a shopping mall or a hotel. I don’t remember this happening in the movie at all, but since it’s been over a year since I last saw Little Nicky, it’s possible I just forgot.

The woman with the perfume bottle here keeps spraying you, for no apparent reason. Again, I don’t seem to remember this from the movie. Perhaps this game has Blues Brothers disease, where there is no connection whatsoever to the movie it’s based on. At least that game, though a blatant re-release of Titus the Fox, had the decency to use music from the film.

There is no way to harm the perfume lady, or any way to stop her from attacking you. You can’t even put her into your flask. You stand there like a Muppet mashing the action button trying to get the lady into the flask, all the while she beats you to death with her perfume. Who’d have thought the son of Satan would be such a bloody pushover? 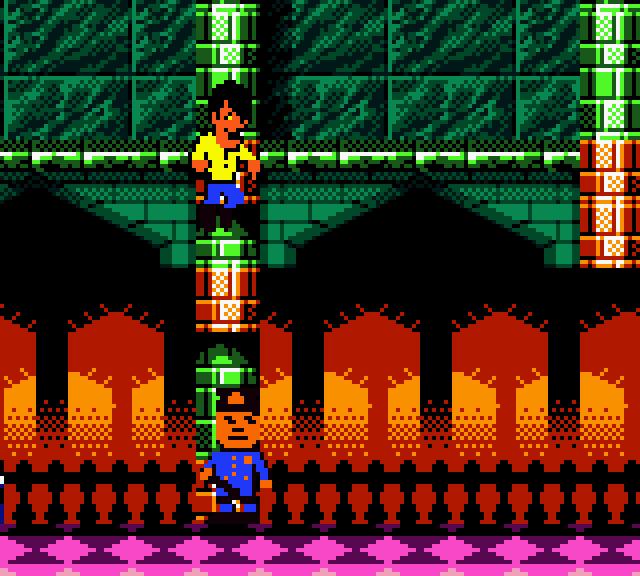 Level 7, “Mall Aboard,” is more of the same. No, literally. The background gets a nice palette swap, but the rest of the stage is relatively unaltered. The same enemies punctuate it, including the woman with the perfume. Oh, she just loves to spray that perfume all the bloody time, doesn’t she?

These ladies are almost impossible to dodge. It requires jumping over them as they turn around to walk in the opposite direction. It also requires impeccable timing. This wouldn’t be a concern if you didn’t bump into a bazillion of these ladies in a stinkin’ row. 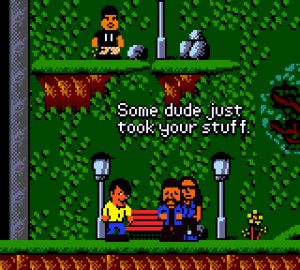 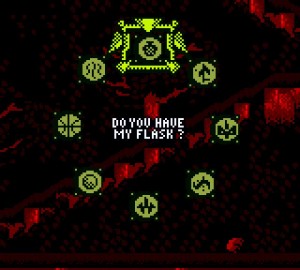 Level 10, the next level that I had a password for, begins with Little Nicky being awoken in the park by metalheads. I remember those guys being relatively funny in the movie. This stage is more of the Level 5 deal, except instead of putting people in your flask, you’re asking them if they’ve seen your flask. After doing so, they either turn into a devil (seriously, what the crap is up with that?) or they disappear in a puff of smoke. 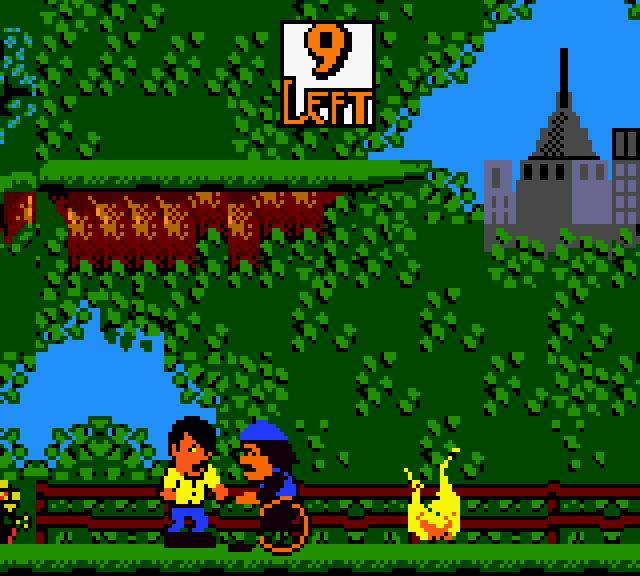 In the same stage, there’s also a man in a wheelchair. You cannot ask him about the flask. He’s actually another obstacle that drains your stupid life. What the hell is up with that? Why are you getting beaten up by a wheelchair guy? I can’t remember anything like that in the movie (that could be my bad memory again), and nobody is supposed to know Little Nicky is the son of Satan yet.

I try as hard as I can, but I cannot beat this level, either. When Little Nicky reaches full Fire Power, he runs full-pelt in the direction he’s facing. As it’s hard to judge where he’s running, he tends to dash straight into a devil and injure himself. I’m very disappointed in this game so far. I’m disappointed in the choice of source material, the shoddy gameplay, the terrible controls. There isn’t a single aspect of it so far that I feel I can recommend to anyone. 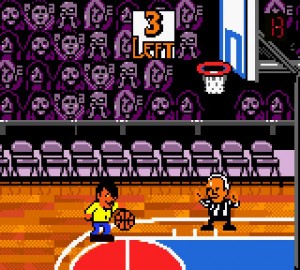 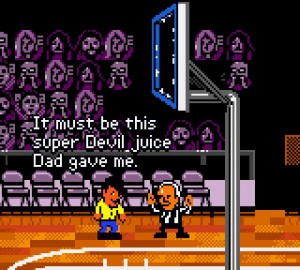 The second level I managed to complete was Level 12, the face-off with Cassius. In this part, you need to see if you can score enough hoops in the given time limit. Afterwards, Cassius falls for Nicky’s trick and gets sucked into the flask.

The next level teaches us how to use our new technique, or at least, it’s supposed to. All that happened when I tried playing was that Nicky caught on fire, ran into a pit full of spikes, and died. This was when I decided not to play this game anymore.

…If only it was that simple. I have a password for Level 15; might as well use it and see what happens. 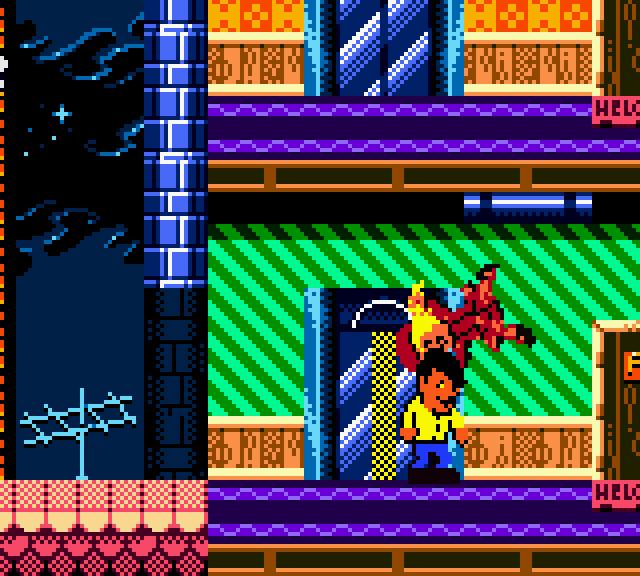 Motion controls? Bah! Fancy-pants three-dee graphics? Who needs 'em? Back in my day, we felt lucky if we had two buttons to press and could tell the hero apart from an 8-bit ketchup stain. The crafty