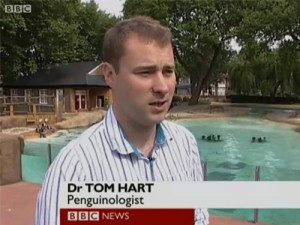 I used to love penguins. When I saw this guy’s job title on the news the other day (see: right), I was pissed off. That should be my job title. Since playing Mighty Fin on my iPhone, however, I’m not sure I really like penguins (or jellyfish or boats or coral or sharks or crabs) anymore.

Mighty Fin is an arcade/action type game in which you are in control of a very cute fish who has to collect bubbles whilst avoiding a series of obstacles (god damn penguins…). Like pretty much all iOS games, the controls are pretty basic: hold your finger on the screen to dive, and release your finger to jump. The aim is to collect as many bubbles as possible—the quicker you collect, the higher the multiplier and the better the medal you will receive at the end.

There are 16 unlockable levels which are accessed through a map, and you can play each of them in either standard, endless, or survival mode. The rewards for completing each level come in the form of costumes which you can make the fish wear. These range from the timeless top hat and monocle to the Rastafarian, the viking helmet, and, my personal favourite, “Finding Emo” (basically a shit haircut on a fish that never smiles). 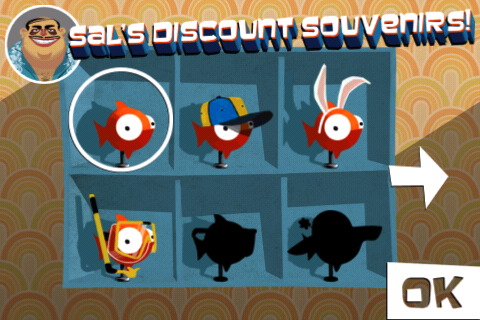 Upon starting up the menu screen, I instantly loved the game’s appearance, and the music is so catchy that it will become embedded in your head for days after you’ve finished playing. The graphics have a kind of storybook feel to them, and although they are high in quality, the seaside themes do remind me of summer holidays in the eighties—minus the rain, wind, shit food, caravans and that one time my sister pissed all over my knee because I got stung by a jellyfish.

Upon beginning the first level, however, I wasn’t initially taken by this game, if I’m totally honest. It seemed a little basic with not much to motivate me to play through to the end. You are literally just jumping in and out of the water and avoiding obstacles, and it began to get a bit tedious. The speed of your fish does not accelerate as you progress through the level, so it felt a bit monotonous at times (though the addition of a Survival Mode remedies this somewhat and gives the game some much needed variety). 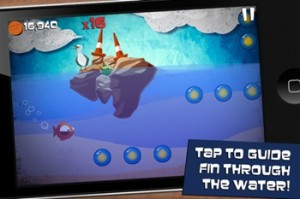 I persevered, however, and once I began to collect the costumes I became a bit more interested. There aren’t that many costumes to collect, so I started getting those “I’ll just collect one more and then I’ll switch it off” thoughts that I still fall for, even after 23 years of gaming. Before I knew it, I had completed half of the game in one sitting, something I haven’t done with a game for a long time. Granted, it only took around four hours, but this was on my iPhone, so it felt like the perfect amount of time to dedicate to a game that I could barely see. To make things even better, the next day I got a brand new update with loads more levels to try, so the game’s fast becoming the gift that keeps on giving.

Mighty Fin is a wonderfully endearing game. I really got attached to the fish with its stupid little face, and even the killer penguins (who inexplicable sound like Chewbacca) made me smile. Although simple in concept, it is certainly not poor in character, and it’s obvious that a lot of love, hard work, and time has been invested in this game—I’m just not sure that the concept is strong enough to compete with the Plants & Zombies of the iOS world. It’s definitely a grower, though, so watch this space!