When Stonekeep was first released, it was more bug-ridden and difficult to beat than a homeless man who won’t hold still. Reception was underwhelming for this reason. Although Interplay was quick to fix many of the issues, it was too late. Stonekeep was stepped over by the mainstream. It lives on today as a semi-obscure oddity that may be in the “cult classic” category. A Wiiware re-imagining is purportedly in the works, as well.

But what is Stonekeep? It’s a first-person RPG dungeon crawler developed by Interplay. The game utilizes both CGI and live-action effects to create an engaging experience. I own the original DOS CD-ROM, so I was ready to just pop it in and play—except that the computer I needed to run it had been dead longer than Pauly Shore’s career. (OK, I’m exaggerating. Pauly Shore never had a career.) So I did the next best thing to play it: I used DOSBox (a program that emulates the specifications of vintage DOS). With a few simple steps, I was playing the original game in its perfect native display. Translation: “CDgamesawesomeness”.

After the game was loaded, I suffered through an abysmally dated Star Trek video and almost called it quits right there. (I don’t want to talk about it.) Luckily, the trailer is only set up to play once. After the trailer is over, the Interplay logo appears and the game begins. Or does it?

Did you know that that cost about one-million dollars to make? Was it worth it? I could argue no. But there is a lot in there! What a quaint little castle town…that gets destroyed. And that dog’s transformation to a pile of poorly CGI’ed bones. Emotional. It looks like the people are running from the prospect of being turned into George Lucas’ special effects. But the CGI is not that bad for its time, I guess.

When the game really starts, it’s pretty straightforward to play. The cursor changes depending on what you need to do. For example, when you hover the cursor over a lever that you need to pull, it becomes a hand. Attacking the enemies is point-and-click. By the way, the first weapon I found was a crappy dagger, which is peculiar because I recall a perfectly good sword being left on the ground in the opening segment. 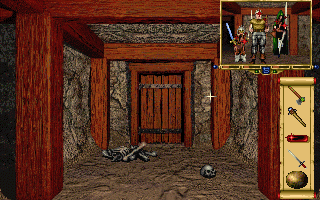 As the game really gets going, it becomes an exploratory crusade to find new weapons, items, and obviously new areas to progress in. One of the first real enemies encountered are the Shargas. These are quaint little creatures that want to kill you something fierce. Gollum comes to mind when I see them. In fact, much of this game borrows from the Lord of the Rings universe. Strangely, the styles are not dissimilar from Peter Jackson’s vision. 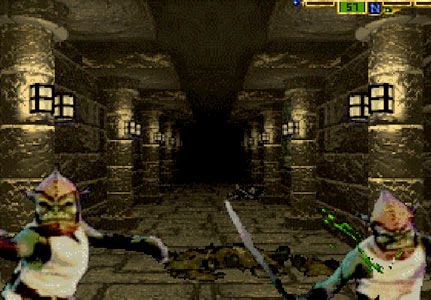 The live-action characters steal the show! They have multiple fluid movements and realistic features. (Think the Mortal Kombat style of model capture, but with a lot more detail.) I almost wish they’d pursued this rendering style further throughout the years. I’d prefer it over the early polygon styles any day. Then again, the sprites are technically 2D, so they have no real depth. It is a dead-end method that was superseded by the motion capture they use today.

But honestly, they put a lot of effort into these characters. The special effects used on the actors are Hollywood-quality. Sure, the same enemy models are re-used multiple times. But even these “clones” vary in color, size, and strength. There’s a large variety of enemies that the developers have titivated nicely. The Ice Queen, however, relies on good old-fashioned sex appeal: 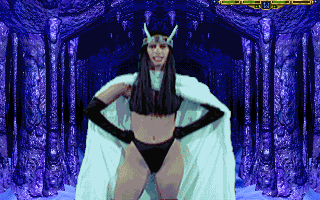 Thankfully, the game can be played one-handed.

To add to the already impressive level of detail, many of the enemies have voiced dialog. Surprisingly, this can lead to a few ethical dilemmas. For example, early in the game the player encounters a Sharga that says: “This my home! Monster you leave!”

In order to defend his home (and possibly his pregnant wife), he attacks you. You have to kill him (and take his stuff) in order to progress through the game. There is no way around it. His “home” is a room that happens to lead to the rest of the castle. That is a home invasion and homicide that the developers force the player to commit. His house even has a table, fireplace, bed, and food you can steal. You just end his entire existence. One small dialog throws the game into a moral nightmare. It’s almost as if the developers are training you to accept the fact that you are a malefactor right out of the gate. 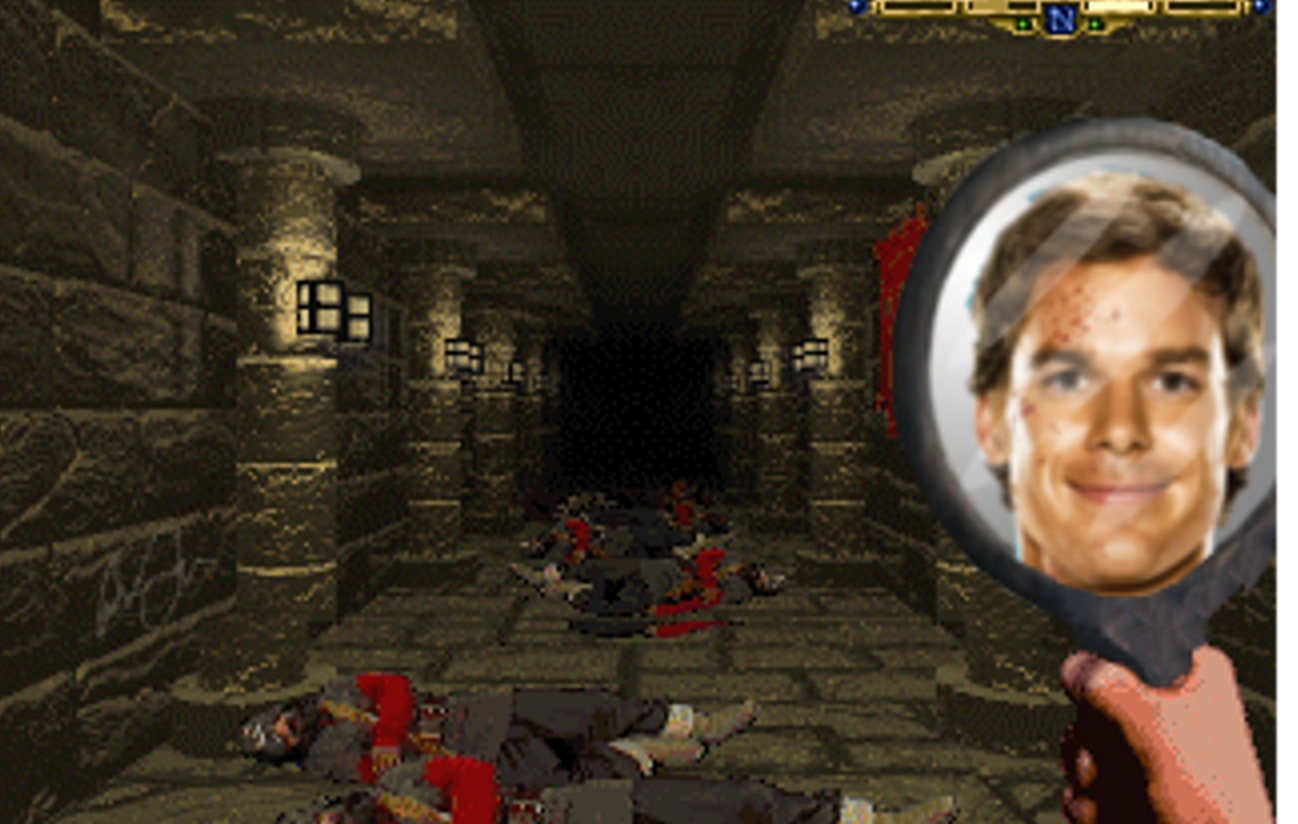 Certain Shargas simply give up after you engage in battle with them. Seriously—they drop their weapon and actually whine and grovel in an indiscernible tongue, begging you for mercy. If you take the weapon they dropped and walk away with it, they’ll resign with head-in-hands in defeat and humiliation. If you return to the pitiable creature and drop his weapon at his feet, the little shit will actually pick it up and start attacking you again! That is a serious commitment to detail! When enemies are killed in Stonekeep, their bodies stay there for the remainder of the game as a horrifying reminder that you ended their reality.

As is the staple of many RPGs, you meet a few friends along the way. Just like the enemies, they are all unique and creatively conceived. The allies really help to stave off the sense of loneliness that could ensue from meandering alone in the underground labyrinths. Except for the elf, Enigma. Enigma’s appearance and demeanor is what Legolas and Edward from Twilight‘s love child would look like. Having him on my team actually made me feel MORE lonely somehow. 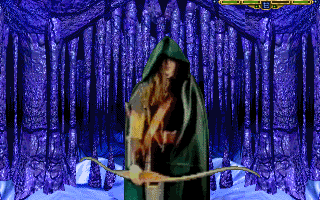 My tears have frozen from the coldness in my soul. Also, I cut myself.

Other party members include dwarves, a fairy, a Sharga, and some others I won’t spoil. Drake will encounter others that can be talked to and are seen once or twice throughout the game, most notable being the one and only Wahooka! I loved this guy. 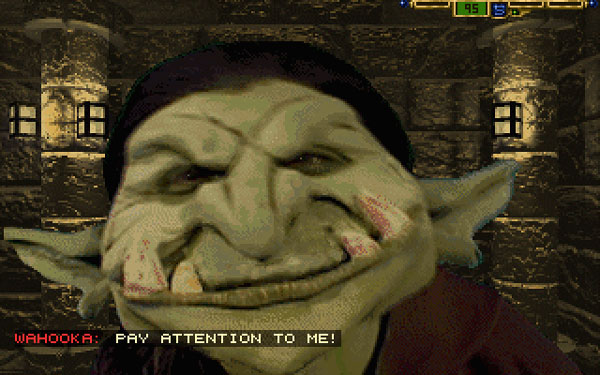 The journal is one of the items you are forced to pillage from the home invasion I mentioned earlier. It’s the key to the rest of the game. It contains stats, item and rune information, and maps.

In the journal, the maps can be marked and written on to serve as a means of not getting lost and taking notes. What a novel idea! This game would be nerve-meltingly frustrating without it. Seriously, why don’t more games do this today? If you’re anything like me, this is a question you’ll be asking yourself quite a bit during this game. Many of Stonekeep‘s seemingly simple features have been neglected by almost every game since. 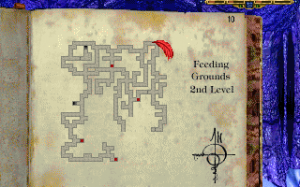 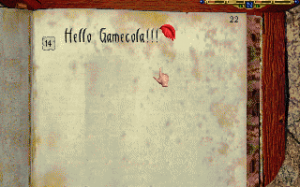 The magic system is quite unique, as well. Runes are Stonekeep‘s spell system. After you learn them, you can etch them into the slots on a runecaster. As with many of the other aspects of the game, it’s up to the player to write a description of the rune next to the symbol. Several runecasters with various power levels can be found. 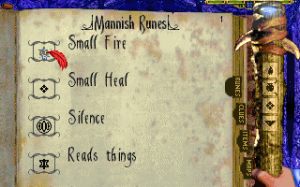 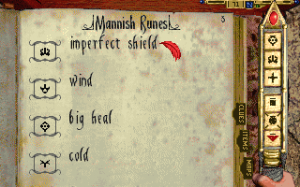 Complaints about this game are few and far between. The sound effects are very good and offer several variations of the same action. The music, however, is the first point of contention. Or is it? The MIDI tracks are OK. Just OK. Although there are different tracks for every new area, and a battle theme, they sound a bit dated now. But who knows—maybe they sounded like John Williams back then. Needless to say, the music has not aged well. 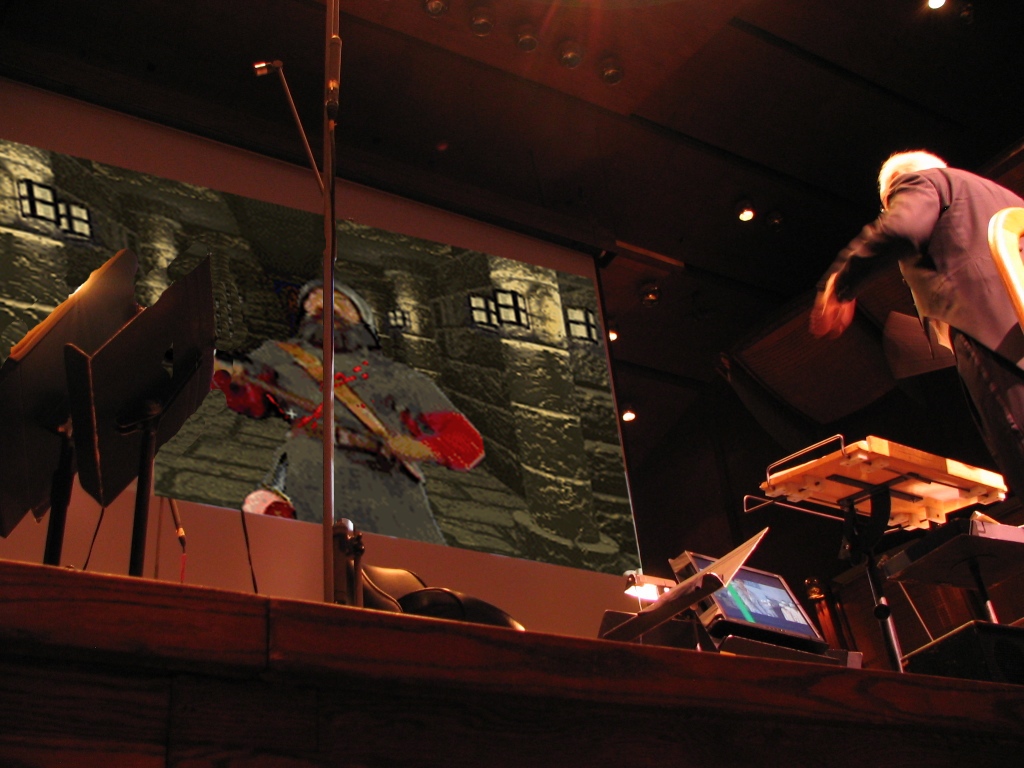 This game can also be permanently ruined by a single poor decision by the player. And I’m not talking about putting the CD in the toaster to “burn” it for a friend, either (shazam!). An example of this would be pissing off the dwarves. The dwarves are a benevolent race, unless you steal from or attack them. If you attack one of them (even as a onetime tasteful warning they deserve), the entire clan goes apeshit and players must kill ALL OF THEM to survive. And that is not easy to do. The dwarves will hack at you with axes and THROW FRIGGIN’ GRENADES AT YOU. 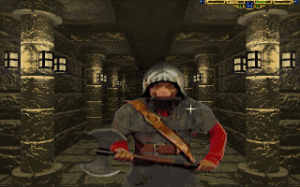 Steal from me, and I will wear your stomach like a hat.

True, the game does not technically end after your “accidental” genocide. However, the prospect of trudging through the remainder of the game is grim, because a few of your teammates happen to be dwarves, and they won’t join your party after you’ve pillaged their home. (I’m sorry, Domber.)

Other blunders are less obvious at the time, but have dire consequences. For example, the nine planet “receptacles” needed to complete the game appear as normal objects that can be thrown away or dropped just like skulls, rocks, Sharga feces, and other worthless items. (Wait, did he say feces? Yes, you really can collect Sharga excrement.) You don’t get any warning if you forget or drop a planet at any time. However, when you’re at the final boss of the game and ALL of the orbs are needed in order to defeat him, you may find yourself wishing you hadn’t dropped it. But at least you have plenty of Sharga poop.

Even the praise-worthy detail of the game is a double-edged sword. Enemies of the same kind will always drop the same type of weapon every time. So although you have the ability to collect the same items over and over, it’s worthless and repetitive. 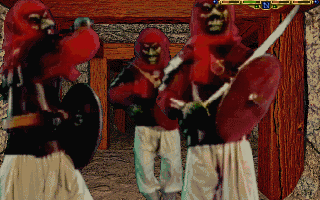 All I see are three sets of swords and shields I already own. So who is the real monster here?

The “self-serve” nature of the game (such as having to write your own spell descriptions and map directions, keeping your inventory clean of items you don’t need while hanging onto those you do, and not killing the innocent) may also be a negative to many people. I get it. Developers have since been catering to children in the gaming process by making almost everything automated. I happen to like doing it myself for a change. It adds a level of, dare I say, responsibility.

The bottom line is that for the small amount that this game gets wrong, I say it gets 90% right. From the items and settings to the incredible character designs, this game really impressed me. I am actually withholding some details on purpose because I think many people might love this game too.

I highly implore everyone who is intrigued by my review to simply get it. Amazon: $4. Abandonware sites: $Free. Or, if you have a Wii, give that version a shot when it comes out.

And now, I leave you with a few more screenshots that didn’t fit with the article. 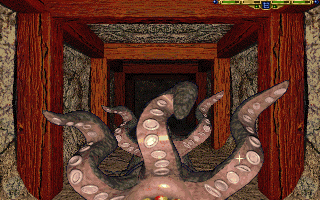 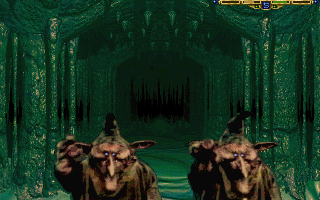 Quentin Tarantino‘s face was used for this model design 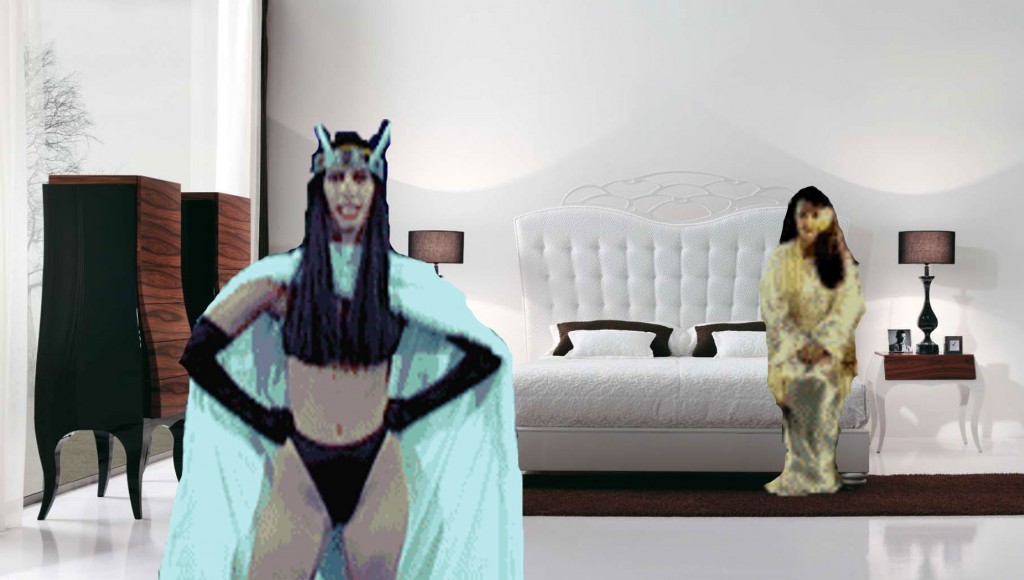 …How did this get in here? NEXT SLIDE! 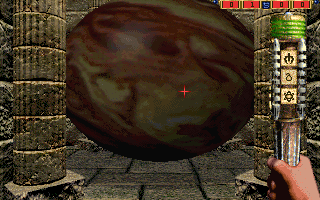 I didn’t “planet” to end this way. 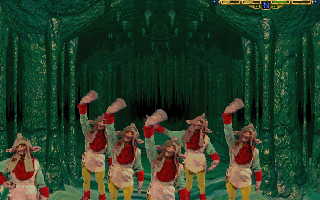