It’s a well-known truism in gaming (in other words, it is a broad-scale generalization that I totally just made up) that no two gamers will have the exact same taste in videogames. This is the reason that different genres of gaming exist: since the market of people who like games is heterogeneous, logic dictates that the selection of games available must be as well. I will be the first to confess that I do not react to all types of videogames with the same levels of enthusiasm. Puzzle games, for example, have always been an easy sell for me, while RPGs were something of an acquired taste, platformers are still kind of a stretch, and first-person shooters I won’t touch with a standard-issue ten-foot pole.

Another category of gaming that I generally stay away from is MMOs (for the uninitiated: Massively Multiplayer Online games). While some people adore this particular genre, it is a little too immersive for my tastes. Games like World of Warcraft and Second Life may only be virtual worlds, but that doesn’t stop them from developing their own economies, politics, and even occasional disease outbreaks. If you aren’t careful, it is way too easy to disappear into the game completely, replacing friends with online compatriots, social gatherings with raids, and real money with fake money that might as well be real money. Another qualm I have is the existence of total anonymity, which can cause seemingly normal people to lose all semblance of courtesy and compassion. Put simply, MMO players–even the ones who aren’t intentionally trolling everyone—are often complete dicks. What is worse, if you play MMO games, you might be one of them, even if you don’t realize it. After all, the line between “righteous anger” and “complete asshole” tends to blur when you replace faces and voices with text chats, and how can you say for sure whether it’s actually the guy on the other end who is the “crazy one”? All things considered, I have concluded that it is probably for me the best to avoid this genre altogether, lest I too become a Crazy Trolling Asshole/Dick.

Of course, “concluding that something is for the best” does not always equal “actually doing that something.” In my case, this grand exception to my MMO boycott took the form of a game called Puzzle Pirates, which recently became available for download through Steam. This happened in part because my relationship with Puzzle Pirates is actually one that predates my relationship with Mike (who has been the source of most of my introduction to gaming) by a good four years. You see, Mike wasn’t the first gamer I ever dated; and while my previous boyfriend wasn’t nearly as zealous in his mission to convert me, he did manage to expose me to my first real tastes of the gamer world.

Puzzle Pirates was an MMO that first snuck in under my radar because it posed itself as a puzzle game. Yes, you play as a pirate on a quest to loot and pillage, but if you want to go sailing on a ship, you play a puzzle. If the ship needs to be repaired or bilged, you play a different set of puzzles. If your ship is attacked by another band of pirates, well, the victors to whom the spoils are awarded must of course be determined by a puzzle! For someone like me, it seemed like heaven. 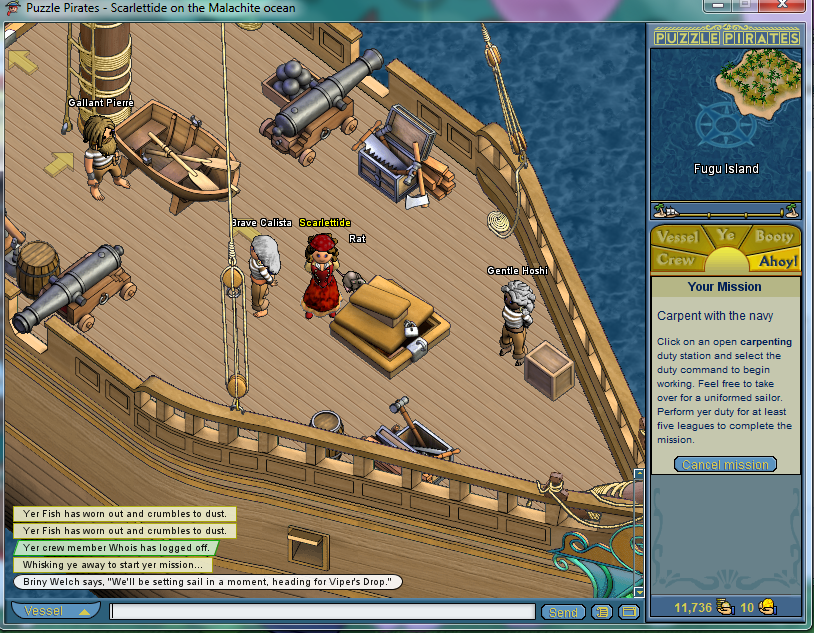 Puzzle Pirates also endeared itself to me because it became something that my college boyfriend and I were able to bond over and could both enjoy. Even when we weren’t in the same room, we could go pillaging together online. It was a great deal of fun, and it made us feel closer to have something that we could share.

Unfortunately, not all gaming obsessions—or all relationships—are destined to last forever. My last memory of Puzzle Pirates unhappily coincided with what turned out to be the end of my relationship with my college boyfriend. I had just finished my sophomore year of college and had decided to spend my junior year abroad in Europe. With the long separation closing in, I think we both sensed that it was time to start wrapping things up. However, I didn’t want to leave without seeing him one last time. So, in a fit of romantic enthusiasm, I booked a plane and flew out to spend a week with him and his family.

The dream vacation didn’t exactly turn out as I had hoped. To start with, I spent most of the trip sick with a cold I caught on the plane. We didn’t get much “alone time” either, since we were in his parents’ house and their rules stipulated that I had to sleep upstairs in the guest room. Worst of all, underneath every thought or sentiment I had was this quiet sense of desperation and the knowledge that we were running out of time.

The last straw, though, was an utterly stupid little moment that probably wasn’t remotely worth the time or energy I have spent fretting over it in the years since. I was feeling sick and miserable, and I wanted attention. He was distracted by the lures of his latest Puzzle Pirates mission. I wanted him to turn it off and be with me; he never even noticed I was annoyed. It was nothing; but somehow, it was everything. Two months after the visit, we mutually agreed to end the relationship.

While Puzzle Pirates wasn’t the culprit behind our breakup, I don’t think I ever really forgave it, either. After I returned home, I went off the game cold turkey. It didn’t make another appearance until recently, when Mike brought it to my attention. I must have mentioned it to him at some point, because when he saw the game appear on Steam, he quickly pointed it out to me. “Didn’t you used to play this back in college?” he asked. “Apparently, it’s available for free download if you’re interested…” And just like that, I was back in the pirating business.

It’s interesting to me how Puzzle Pirates has spanned the gap between these two periods of my life, and between the two most significant relationships I have ever had. To be clear, unlike my college boyfriend, Mike has no interest in Puzzle Pirates (he hates MMOs even more than I do); so these days Puzzle Pirates is something that I play alone. On the other hand, I have never forgotten that final, painful visit, and every time I think about it, the thing I keep coming back to is how different my relationship with Mike is from the one I remember from college. No matter where Mike is or what he is doing, when I need him, the console goes off. It is as simple as that. I know I am more important to him than any of his games are, and he is the same for me. While I might be going through a slight MMO-related obsessive phase at the moment, Puzzle Pirates isn’t going to destroy this relationship. I would bet my last piece o’ eight on it.

A behind-the-scenes look at the development of the Crystalis D&Dcast and the Final Fantasy RPGcast, complete with top-secret game materials for download!