Try to recall the last time you found yourself playing a new game that—for whatever reason—just wasn’t all that great. It shouldn’t take you too long to think of one. It’s happened to all of us. Perhaps it was a game that you had heard good things about, or one that came highly recommended by a friend. Maybe the back of the box just looked interesting. Anyway, soon you found yourself grabbing the game, sticking it in the console, and plopping yourself down on the couch, ready to play. Then, tragedy struck. Sometime around the 30- to 60-minute mark, you began to have a sneaking suspicion that this game might not be all it was cracked up to be. Over the next hour or so, your feelings of unease steadily grew. Finally, after putting in about 3-4 solid hours of game time, you had to face up to the unfortunate truth that you had just wasted an entire afternoon on a game that you really didn’t like.

Immediately following such a revelation often comes a series of warring impulses. On one hand, to an active and experienced gamer, the idea of wasted time is not appealing. You know you’ve played better games in the past, so why should you continue to slog through something that is “fine” but not stellar? On the other hand, you might be the type of person who feels compelled to finish something once you have started it (Note: this is definitely true of Mike, who probably has an undiagnosed case of OCD); not to mention the possibility that there might be nothing better on hand to play instead. Thus, a conundrum presents itself: when faced with a game that is of mediocre quality, should you simply give up, or should you push onward in the hope that the game will eventually reward your patience with some sign of improvement?

Unfortunately, if the game doesn’t improve over time, this irritating quandary simply continues to repeat itself every time you pick up the controller. This is partly due to the peculiar tendency of the human memory to blank out on things that are unpleasant or painful. No matter how bad the last gaming session was, give it a few days, and you will invariably find yourself thinking: “You know, maybe it wasn’t really that bad. Maybe I was overreacting to the tedious plot and the terrible voice-acting and the glitch mechanics. Maybe if I just give it one more chance, it will actually end up being awesome.”

Mike has dubbed this odd phenomenon The Candy Corn Effect, named after the beloved tricolored Halloween treat. Put simply, the Candy Corn Effect describes a strong, pressing, and inexplicable desire to eat something you don’t actually like all that much. 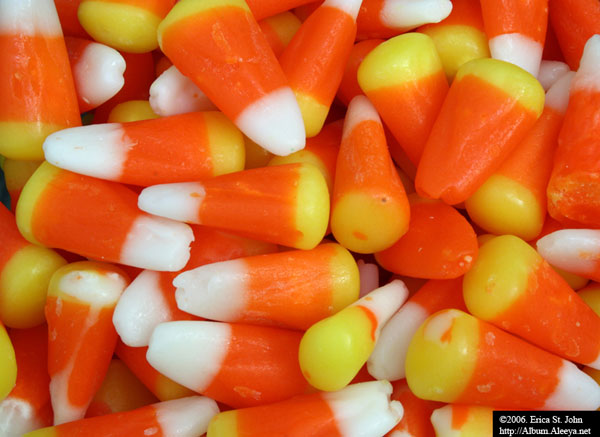 Pictured: All your wasted hopes and dreams

Mike first coined the term while playing Tales of the Abyss, which he had borrowed from his brother. He said that it was a “serviceable RPG” in terms of mechanics, but he quickly grew to hate the characters, all of whom were whiny, annoying, and cursed with ear-splittingly terrible voice actors. His brother swore up and down that the characters “got better” later in the game; but it was rapidly becoming clear that “better” might take a while. Unfortunately, RPGs are pretty heavily dependent on storytelling and character development (since mechanics alone aren’t enough to make a 40+ hour game interesting), so a game where you hate all the characters can become really painful, really fast.

As it happened, Mike started playing this game around the time that we had purchased and were listening to a new album from angry comedian Louis Black. Among the many rants on the CD was a particularly vitriolic tirade about candy corn. “Candy corn,” Black pointed out (and please note that I’m paraphrasing here), “basically tastes like shit. But the thing is, you only have to eat it once a year, so you always end up forgetting how terrible it is. Halloween comes around again, and hey! It’s corn, that tastes like candy. There’s no way that can go wrong! And then you actually eat it, and it’s like, ‘Son of a bitch, it got me again!’”

For some reason, Tales of the Abyss had a similar effect on Mike. As bad as it was, about an hour after he’d thrown down the controller in disgust, he’d start thinking, “Well, maybe it wasn’t that bad. Maybe I should try again. Anyway, it is supposed to get better. I guess I’ll give it another go, and…Son of a bitch, it got me again!” And so on.

Candy corn games are everywhere, so avoiding them completely is next to impossible. The only thing you can really do is recognize them for what they are (ideally before you get too far in), and act accordingly. Remember: you are not obligated to play these games. I repeat: You do not have to do it. Just because it got great reviews in IGNSpotCritic or it was recommended  by your Best Friend’s Cousin’s Brother does not mean that you have to guilt yourself into loving it too! You can instead just put the controller down, and walk away. Simple as that. Go read a book, or practice woodcarving, or find some other way to entertain yourself until the next new release comes out.

Incidentally, the “Just Say F*%king No” rule applies to other forms of entertainment as well. I didn’t figure this out for myself until 1998, when I was but a mere teenager. At the time, I was making an ill-advised attempted to read George Orwell’s 1984 on my own. About halfway through the book (right around the point where everything starts to get really depressing), I suddenly realized that I did not like where the book was going, I did not feel like reading it anymore, and God dammit, I was not obligated to continue. There was not going to be a test on it; no one expecting me to finish. I could just stop. It didn’t mean that the book was bad, necessarily; I just REALLY hated it. I took it back to the library the next day. And I felt great.

Mike had a similar experience recently while playing Elder Scrolls IV: Oblivion by Bethesda Software. He had picked it up because his best friend loved it and had just moved on to playing Skyrim, Oblivion’s much-lauded successor. Mike was eager to see what all the Oblivion fuss was about, but soon realized that he disliked the leveling system, hated the lack of storytelling, and was constantly cursing the way the game inadvertently discouraged exploring. He really did give it a fair chance; but eventually he was forced to admit that if he had to play a Bethesda game at all, he’d much rather be playing a game like Fallout: New Vegas, which he had already played through at least three times (not including DLCs!). While he respects his friend’s opinions and tastes, the truth is that games like Oblivion and Skyrim just aren’t for him.

Which is why, I guess, he is now playing New Vegas yet again. Like, for the fourth time. Because if Oblivion is candy corn, then—for Mike, at least—Fallout is the Reese’s Peanut Butter Cup of games, full of chocolaty, peanut buttery, mutant-murdering goodness that can be enjoyed all year round.

Nancy Drew has only solved one murder mystery in her 20+ game series, and that's the murder of Jake Rogers, a student at Paseo Del Mar High who was violently pushed down a flight of stairs. Nancy's fi