Zeke and Ethan are at what appears to be a golf course, but are playing paintball. Ethan asks if Zeke is ready, then fires at him a bunch of times. He misses with all but one, which strikes the robot in the shoulder.

“Woohoo, I got you! These things are tough to aim.”

Zeke now goes into RoboCop targeting mode, a crosshair appearing over Ethan’s crotch. He unloads 5 or 6 paintballs, and we hear Ethan moan in agony. Dammit, I wanted to see his nuts get hurt. 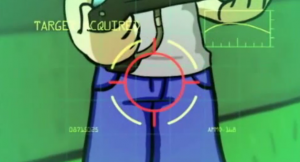 Ethan: “That’s not fair; you used like, math or some shit!”

Zeke: “I’m not taking the blame because evolution cursed you with a fragile meat-vessel to call a body.”

Ctrl+Alt+Del—demonstrably pro-creationist. Anyway, that was terrible, but at least the pre-credits wasn’t the whole episode again. Yep, opening titles roll. No discernible plot or motivation has been set up.

Some sort of elf walks along. He falls over and turns around. Spotting an adorable little bunny, he smiles cruelly and draws his sword. The bunny looks up quizzically. Down comes the sword.

Cut to Ethan at his computer, who espouses the virtue of his knight becoming level 30, or something. Get it? It’s funny because he’s playing a videogame. Zeke stands at the doorway and explains that he is level 60, despite only making an account the previous morning. This is, of course, impossible, but who cares?

Ethan complains to Lilah that Zeke is better at everything than he is, while repeatedly walking in front of the TV she’s playing a game on. Zeke’s not better at being an INCONSIDERATE CUNT, IS HE!?

Lilah: “He’s a computer, obviously he’s gonna be better at technical stuff. It’s not that big of a deal.”

Ethan glares at her.

Ethan: “You’re siding with him! Oh my God. You’re a robot! I’ve watched Battlestar Galactica. I know that the Cylons look like humans now! You can’t fool me!”

Lilah: “Uh, OK. You caught me. I’m a robot. I’m on a mission to harvest your brainmeats for fuel.”

Anyway, Ethan freaks out and runs off. He approaches Zeke, who is repeatedly flicking a lamp on and off for some reason. Ethan then explains that humans are better than robots and pledges he will prove it. He drags Zeke off camera.

Lucas is sitting at the table reading a paper when the two enter. Ethan asks who is better, himself or Zeke.

Some stuff is said, then Ethan takes a massive bite out of a loaf of bread, bragging that he can eat better than a robot. Predictably, he then starts to choke. Zeke rushes over and whacks him on the back, presumably saving him. 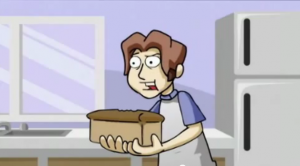 How much better would this have been if Lucas and Zeke just stared on impassively, while Ethan tried in vain to beg for help, his eyes filling with tears as he reaped what he had sown with his maniacal behaviour? Just me?

Back on the sofa, Ethan apologises to Zeke, mentioning that he’s dating a robot. Remember, ‘cos of the whole Cylon…yeah, that. Anyway, Zeke announces that “porking the vacuum cleaner does not count as dating.” Yep, enjoy that mental image.

Ethan looks over at the nearby vacuum cleaner.

Cut to the vacuum.

Cut back to Ethan.

Credits roll. We hear the sound of a vacuum.

HA HA! HE’S FUCKING IT! HE’S THRUSTING HIS ERECTION IN AND OUT OF IT TO STIMULATE HIMSELF TO ORGASM!

This episode’s side-splitting comedy credit: “17 ordinary house pets were harmed in the making of this episode. The 18th was a fast little $%&*@#.”

Another entirely worthless five minutes. Seriously, I am staggered that Buckley had the gall to charge for this. There is an infinite amount of superior stuff available completely free.

I apologise for how little I wrote about this one—there’s honestly not a whole lot to be said.

Dear Readers, Atari released its "Video Computer System" (known by most as the regular ol' Atari) to American audiences in 1977. The next mainstream home console, the original Nintendo, came out eight