I have to say, I’m not looking forward to doing this. That first episode was astonishingly shit—it wasn’t even just unfunny. It was actively shit and lazy. There was demonstrably no effort or interest put into it. Well, it was the first one; maybe it’ll improve a little.

This episode’s running time is 5:31—we can knock two minutes straight off that for the credits on both sides. Actually, the Blind Ferret ident’s about 20 seconds itself. So that’s about three minutes of episode. All right, here we go. Wish me luck.

Ethan and Zeke are gaming.

There is a little tension.

Ethan: “Did you turn off my controller?” 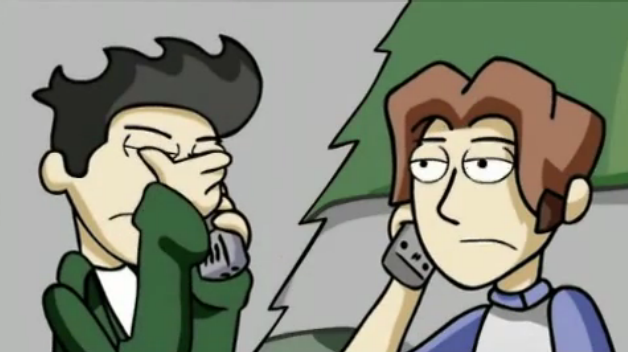 “Sorry, I can’t come in; I have to be in the worst thing ever made.”

Oh yeah, I should probably explain—Zeke is an Xbox. And they are playing on him, I guess? Oh wait, the disc’s still playing, hang on a sec.

Zeke: “Oh look, your controller is back on. Magically! Let’s play again.”

Ethan’s phone rings. He answers it.

OK, I have two problems with this.

One: WHY EXPLICITLY AVOID THE USE OF PROFANITY IN THE FIRST EPISODE IF YOU’RE JUST GOING TO HAVE HIM SWEAR ANYWAY!

Two: THE “NO HABLA” THING IS THE OLDEST JOKE IN ALL RECORDED TIME.

Barry: “You’re supposed to be at work today.”

Ohh, Barry is his boss, I guess.

Barry: “Oh, that’s interesting ‘cos I just called your house phone and you answered.”

It’s worth nothing at this point that when Barry says that line, he leans over the little “telephone dividing line” that separates the two locales. You know, in TV shows when two people talk on the phone, you have that little dividing line? Well, yeah, anyway, Barry places his hand on it and leans across. This is stylistically interesting, and is the first and possibly only time anything that appeals to me will happen. So, that’s worth a half a point I guess.

Ethan hangs up and says “shit” again, complaining to Zeke that he has to go work. He then hatches a plan to first go to work, then have Zeke ring up and claim some sort of family tragedy, so he’ll get to leave work without looking like he’s skipping out.

Ethan confirms the plan with Zeke, then leaves. Zeke raises his arms in victory and says “owned.” 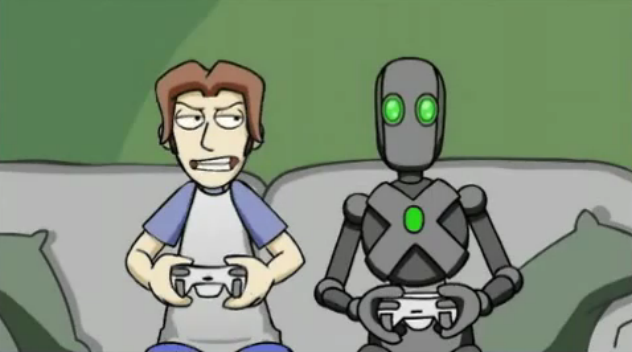 Ethan: Portrait of a serial killer.

WAIT WHAT, WE HAVEN’T HAD THE OPENING CREDITS YET!? THERE WILL ONLY BE TWO MINUTES OF EPISODE LEFT AFTER THIS! THAT COLD OPENING WAS HALF THE EPISODE!

Why even PRETEND this is television!?

Anyway, credits over. Here we go. It still has a chance to improve.

Ethan knocks over a load of cardboard boxes, tears one open and removes a game from it. He unpacks the game and starts reading the manual. Barry approaches.

Ethan: “This was damaged; it was already open.”

Barry then proceeds to leave Ethan in charge of the store. He’s functionally fucking retarded, then.

DON’T LEAVE HIM IN CHARGE THEN, YOU THICK CUNT. You devise your own demise!

Ethan is gaming on a display pod or something. A customer meekly approaches.

We pan to the right to reveal a large crowd of waiting customers. Ethan looks at the store’s phone and scowls.

We cut back to Zeke at home, gaming, then promptly return to the store, where Ethan is behind the counter. A customer is there, holding an original Xbox. He says that he heard the store takes game trade-ins. The customer asks to trade in his Xbox for an N-Gage. Ethan perks up, a huge smile on his face, delighted that he has been blessed with the chance to deride someone who he considers beneath him.

“Sure! Just let me get the paperwork for that.”

Ethan disappears behind the desk.

HE THEN REAPPEARS IN A JASON VOORHEES HOCKEY MASK BRANDISHING A REVVING CHAINSAW ON WHICH “N-GAGE” HAS BEEN SCRAWLED IN BLOOD. The customer runs away, and Ethan puts down the chainsaw and mask. So…Ethan has killed before? Sweet Jesus, the hole gets deeper. TIM BUCKLEY! THESE ARE NOT “WACKY JAPES”! THIS IS PSYCHOPATHY! 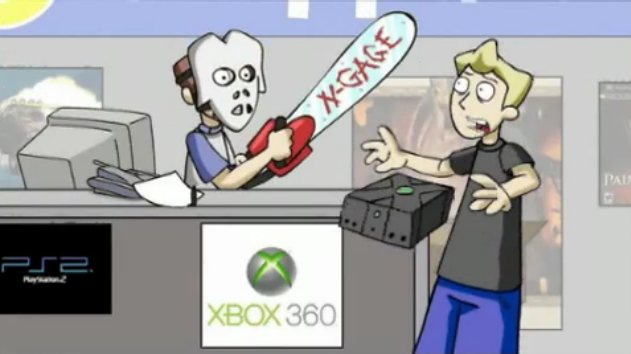 We see Zeke sat cross-legged on the ground with a ukulele. He plays a luau tune as the previously-seen penguin dances in a Hawaiian leaf skirt thing, I don’t know what they’re called. This is random and of course, hilarious.

Back at the store, a smartly-dressed girl walks in and looks around. Ethan leaps out of nowhere and yells in her face “WELCOME TO GAME HEAVEN CAN I HELP YOU FIND ANYTHING!” She falls to the ground, unconscious. Ethan smiles and giggles.

We then cut to Zeke popping some bread in a toaster, presumably while Ethan rapes the unconscious girl.

Back at the store, it’s closing time. Some stuff happens, regarding Ethan’s tab or something, I don’t know; I can’t really focus on it anymore. It’s fucking drivel.

Ethan gets home and chews out Zeke, who claims he forgot to ring Ethan. Ethan then lectures Zeke on responsibility.

Yes, Ethan lectures someone on responsibility.

Ethan. The rapist and murderer.

That was even worse than the first one. One of the most inconsequential things I’ve ever seen. I have nothing more to say about this episode. Next one’s called “Competing With Zeke.” Surely, I cannot wait. See ya then.