A year or two ago, I embarked on a mission. An ordeal. My task? To watch and review every single episode of Ctrl-Alt-Del: The Animated Series (available now on DVD!). Why did I do this? Well, I’m a glutton for punishment, you see. I’ve been known to endure the worst in an effort to wring out any fun that may have accidentally been crafted in. I enjoy Daikatana, for goodness’ sake. I had read online that this series was woefully poor, and I believed them (the online), but I had to see it for myself. To see if it was as irredeemable as it was made out to be.

It was much, much worse.

What follows comprises the complete breakdown of my critical faculties; insanity reigns. These entries will get shorter and shorter, and descend further and further into yelling and swearing. By the end, do not expect effort. Just pray that I may some day recover. 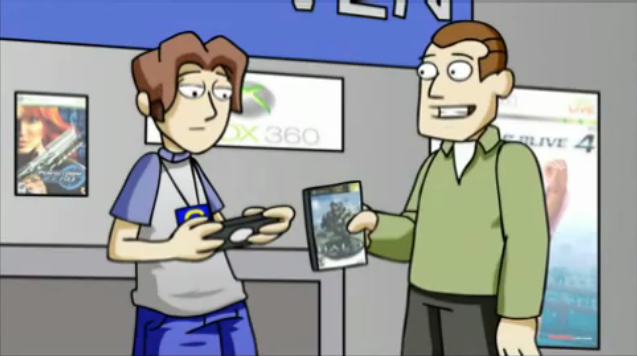 A reasonable, pleasant human being (right) addresses a sociopath.

Ethan’s standing in a game store. This is evidenced by the posters on the wall for Perfect Dark Zero and Dead or Alive 4. He’s playing PSP, looking pretty nonplussed. A customer approaches and brandishes a copy of the original Halo. He addresses Ethan pleasantly and politely.

“Excuse me, will my PS2 play Xbox games?”

Ah, a novice—well, this is to be expected; experienced gamers are hardly going to need to address staff. This is Ethan’s job, then. Presumably his only job. Engrossed in his PSP gaming, he does not respond to the customer, who pipes up again, a little concerned.

“I’m sorry. I don’t speak stupid. And our translator called out sick today.”

Ah, here we go, now it’s recognisably the work of Buckley. The first impression we receive of his cartoon’s lead character is that he is a sociopath and a cunt. This only works as a character type when there’s something there to latch onto, to amuse. Comedic sociopathy has to be blunt, or witty. You can’t have this awful, awful in-between nonsense. This isn’t witty, and it isn’t particularly offensive. It comes off as smug, from a character who’s demonstrated (in hundreds of prior comics) that he has no cause to behave this way. We are less than 30 seconds in and it is already terrible.

“Surely they must have videogame stores in the great land of Stupidia, where you’d to able to purchase and be ignorant of all manner of games in accordance with your society’s customs.”

The customer becomes justifiably irritated and demands to speak to the manager.

Ethan: “I do not understand your strange language-“

Oh GOD, he’s STILL DOING THIS. I tune out Ethan’s voice at this point.

The customer announces he is never shopping here again. He leaves. Ethan makes another smarmy comment. “Screw you!” comes the off-camera retort.

This customer, who will never appear again, is thusly the most likeable character in the entire series.

And now, Ethan returns to playing PSP, a weaselly smile on his face. His work is done. He has seen off the perfectly reasonable question from a customer who is demonstrably not a hardcore gamer like himself. A victory for gamers everywhere, right? So what’s next?

That’s it? THAT’S your cold opening!? Ethan’s an inexcusable prick to a pleasant individual? What was the joke!? Was that a plot setup!? No! This is the introduction to Ctrl+Alt+Del: The Animated Series! THIS COST MONEY!

Sweet Christ, there are five more minutes of this. Let’s continue by looking at the opening credits.

• Ctrl+Alt+Del title screen complete with generic ass-rock music. Let it be known that this is a show with attitude.

• Lucas beats a maniacal, button-mashing Ethan with a single button press. Ethan is displeased! Lucas smiles triumphantly. He is better than Ethan, you see.

• Ethan throws pieces of buttered bread into the wall with a nonplussed expression! Ha ha, how random and wacky Ethan is! When he’s not verbally abusing the public, he’s throwing bread in places where it has no business!

• A customer enters what is presumably a tech support store and presents Lucas with a dripping wet PC tower with smoke pouring out of it. The customer smiles awkwardly. Lucas facepalms in despair. This is the best part of the episode so far.

• Lilah purchases a videogame from a store. The clerk reacts with shock at the woman in his store. Lilah rolls her eyes, then notices that every other customer is staring and pointing. HA HA GIRLS PLAYING VIDEOGAMES. This was made in 2005.

• Zeke, the Xbox robot that the insult spoutin’ bread huckin’ Ethan built, brandishes a bouquet of flowers at the camera. Ah, he’s declaring his love for (camera move to reveal television) A TELEVISION! AH HA, BECAUSE THEY’RE BOTH APPLIANCES! Zeke starts to hump the air! He’s sexually aroused by the appliance!

• Lilah speaks to Ethan in an animated manner. A clearly disinterested Ethan outstretches his hand and—with the calculated coldness of an experienced sexual predator—presses the palm of his hand onto her right breast. She punches him in the face, knocking him to the floor. If this were the whole show, I would have rated it significantly higher.

• Uh…someone whose name I don’t know opens a large metal door. A penguin walks inside. I have no idea what this means; I assume it is from the comics.

• Ah, as the shithole music dies down, the cast of the series all gather around Ethan’s PC as he plays some sort of FPS, and gaze upon him fondly. Lilah rests her hand on his chair. See, they all love each other really.

• CREATED BY TIM BUCKLEY, AND DON’T YOU FORGET IT.

Ah, that was interminable. We’re now up to 1:30 and the meat of the episode is about to kick off.

Ethan walks into the living room holding a carrier bag. Lucas is sat on the couch playing games. He speaks up.

FUCK YOU, ETHAN! Hard-earned!? You just stand around playing PSP and being snide to customers! Actually that was probably the joke. All the same, fuck this guy. I can’t believe he’s supposed to be likeable. It’s established that he does not pay for any amenities, so presumably it’s his girlfriend Lilah doing that. He disregards her feelings and pays her no mind unless he wishes to open-palm her tits. The man is a Neanderthal.

THANK YOU LUCAS. But don’t stop there, curb-stomp the motherfucker! Nope, guess not. After all, only three and a half minutes left to do the plot.

Ah, now I see the conflict. Ethan wants to play Fight Night, but Lucas is using the Xbox at the moment.

Lucas: “Today is my day off and I was here first. Go do something else for awhile.”

Lucas: “Something other than videogames, like, reading a book, riding a bike.”

Ethan leaves in a huff and enters his room, where Lilah is laying in bed with a book. Wait a minute, in bed!? Ah, I see, she’s recovering from her harrowing miscarriage experience. The book is probably Coping With Loss.

Anyway, she greets Ethan and asks how work was. She asks him if he wants to go see a movie.

Ethan: “I can’t, Lucas is hogging the TV and I have to find ‘other stuff’ to do.”

Lilah: “Ethan, going to see a movie is ‘other stuff’.”

Ethan asks if the theatre will allow him to hook a game console up to one of their screens. Lilah says she sincerely hopes not. Ethan then says he’ll have to devise an elaborate plan to get Lucas out of the living room.

He walks past Lucas, wearing a pair of rudimentary wings on his back.

“If you need me, I’ll be on the roof learning how to fly.”

Lucas pays this no heed with a simple “Mmkay.”

Lucas dashes outside (well, actually he kind of floats, but this isn’t really meant to be a critique of the animation—Blind Ferret have done some much, much better stuff subsequently, and have denounced and said “never again” of Ctrl+Alt+Del) and looks around frantically for his psychotic roommate. He spots what is very clearly a dummy of Ethan on the roof of the house.

“If you break your neck I am NOT calling the ambulance!” 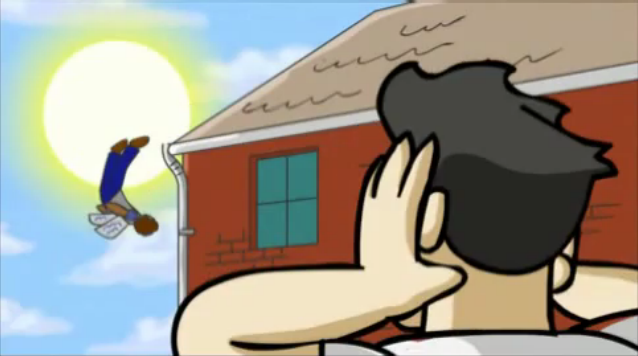 Sadly, Ethan did not die.

“Ethan” jumps. Lucas runs over, panicked. He clocks that this is a dummy. “Son of a…”

We cut back to Ethan, now sat happily on the couch gaming. The doorbell rings and he reluctantly answers it, gamepad in hand. Lucas stands there, smiling.

Lucas triumphantly brandishes some “Kraz-E Glue.” He walks calmly past Ethan, who struggles and grunts as he attempts to pry his hand from the doorknob. In a close-up, we see a photo in the background of Ethan in a wedding dress, next to what appears to be a copy of Windows XP on a plinth. Huh?

“Nobody glues my circle-strafe hand to a doorknob and gets away with it!”

HAHA COS HE’S A GAMER. Wait, don’t you use both hands to circle-strafe? This is irredeemable bollocks. Oh well, only two minutes to go. Ethan declares that this is now personal. Fade to black.

Fade back in. We see, from behind, Lucas gaming on the sofa. Ethan stands around a corner with Zeke, and hands a piece of rope to him. For some reason “In the Hall of the Mountain King” is playing. Presumably because it was free to use. Anyway, we see the rope drop down by Lucas, who regards it with curiosity. He spots a pulley in the air, and the sofa is yanked upwards, flinging Lucas off-screen. Ethan runs on and eagerly grabs the control pad as it falls. The sofa then falls on him. Ha! Gravity.

ETHAN, SCREAMING, COMES AT LUCAS WITH A FUCKING KNIFE! I AM NOT MAKING THIS UP! As Lucas cowers, deathly afraid, Ethan’s foot is snagged in a noose on the ground (!?) and he is hoisted into the air. He swings, upside down, and the knife falls onto the control pad. Lucas turns to him. 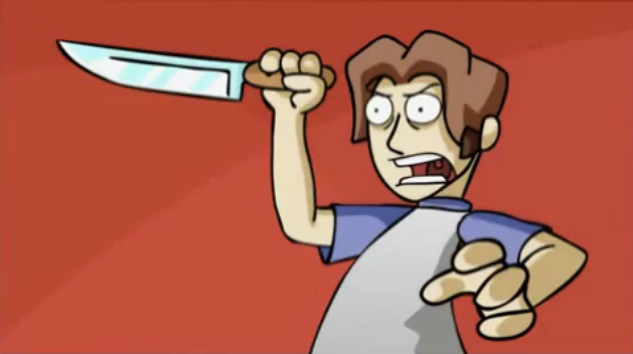 WHAT THE FUCK IS THIS ASSAULT

NO LUCAS. MAYBE “PRISON”! MAYBE “THE POLICE STATION”! HE JUST ATTACKED YOU WITH A KNIFE, AND FULLY INTENDED TO KILL! THIS IS NOT NORMAL BEHAVIOUR! YOUR ROOMMATE IS A MALADJUST! HE NEEDS TO BE SHELTERED AWAY FROM THE REST OF HUMANITY! We’re not talking about wacky sitcom antics, we’re talking about ATTEMPTED MURDER!

“You guys done with the TV yet? I wanna play some Halo.”

*leans back in chair and exhales*

Fucking hell. Incidentally, the credits and opening are, in total, just over two minutes long. The episode runs for 5:33. That’s three and a half minutes of actual content.

Nobody escapes this cartoon alive, seriously. Ethan was doomed from the start, now fully established as a dangerous, homicidal lunatic. Lucas was OK, but then he immediately disregarded Ethan’s attempt on his life. Maybe they’re trying to communicate that this happens on a daily basis? I don’t know. I don’t think I want to know. Lilah? She’s just pathetic, the epitome of a token female. She has no discernible personality, no funny lines, nothing but expository garbage. And the delivery of the pay-off is dismal.

Sweet lord and saviour Jesus H. Christ, there are 11 more episodes in this season alone. Join me next time for episode 2, titled… “Avoiding Work”? OH JUST KILL ME NOW.

…OW! The “Hatchling Studios” ident is MUCH LOUDER than anything else in the episode—I’m talking an ear-splitting increase in volume.

MAN, IT SURE IS HOT OUT.