This classic GameCola article was originally published in November 2005.

So, you’re a gamer. You’ve fought fearsome, towering, multi-headed beasts in the depths of dank dungeons. You’ve waged battle upon armies of samurai across the desolate battlefields of a war-torn nation. You’ve flown in spacecrafts at speeds you can only imagine in real life, and, to top it all off, you’ve sparred with Tiger Woods on the greens of Scotland. In short, you’ve done it all.

That’s all about to change with Phoenix Wright: Ace Attorney, the first in a long line of comedic lawyer sims to reach Western shores.

Phoenix Wright: Ace Attorney plays shockingly similar to Ye Olde Adventure Games. (Note from 2012 Paul: Or, Ye Modern Adventure Games, now!) There’s pointing and there’s clicking, though those are now done with the stylus rather than a mouse. You poke at objects in order to interact with them, either examining them and then trading witty banter with your partner, or noting them for future reference. You poke your way through a series of menus to do just about everything else, too, so don’t bother with Phoenix Wright if you don’t like your games heavy on the text and light on the action. 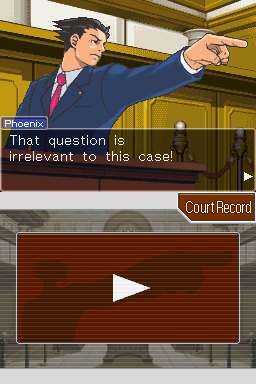 The first four levels of Phoenix Wright come to us from the original Japanese release of Gyakuten Saiban Yomigaeru Gyakuten. Capcom, however, added a fifth level to the game before bringing it here, one that makes use of the DS’s unique capabilities. While the first four levels do support poking at the screen and occasionally shouting “Objection!” into the microphone, the fifth level also allows you to test for residual blood and dust for fingerprints, using the stylus as a spray bottle and…whatever tool one uses to dust for fingerprints, respectively.

Unfortunately for some, a good chunk of this game is just prodding the continue button and watching events unfold without your participation. With this game’s art style, it seems at times that you’re watching an anime rather than playing a videogame. But when you do get to interact with the game, you’ll be hit with logic puzzles galore—some so tricky that you’ll gnaw on your stylus in frustration. (Note from 2012 Paul: Swear to God, my stylus actually is covered in bite marks.) It’s rare that you’ll be able to solve a puzzle without really thinking it through first. You’ve got to know when to raise an objection, what evidence to present, when to press the witnesses, and when to let them slide; and you can’t typically do this via trial and error (pun absolutely intended) because the judge penalizes you if you do something that he feels doesn’t make any sense.

You’ll grow to love all of the characters in Phoenix Wright. Each and every single one of them has more charm than, say, the entire cast of Mad TV. Even with names like “Dick Gumshoe” and “Sal Manella,” they don’t resort to just being stereotypes; they all have unique personalities that you’ll mourn to see go when you’ve moved on from their levels.

Also, Phoenix Wright boasts the best soundtrack of any DS game I own. It doesn’t sound like a lawyer game, or at least what one might expect a lawyer game to sound like; it sounds like a classic Capcom sidescroller if anything, and that’s a good thing. It’s unfortunate then that, since it’s a portable game, you might not get to hear Phoenix Wright‘s soundtrack all that much, since you might be playing it in places where it’s not generally acceptable to blast lawyer sim tunes. (Note from 2012 Paul: This was of course before the invention of headphones.)

Speaking of the Metro, Phoenix Wright thankfully, unlike so many other DS games, does not oftentimes require you to shout at or blow on your DS. I don’t know about you, but I’m just not comfortable with yelling “Take that!” while standing in a crowded train station. The only time you need to do anything like that is in the aforementioned fifth level, where you occasionally have to blow away fingerprint dust. (Note from 2012 Paul: This proved to be a problem the last time I played the game, which was unfortunately immediately following some painful dental surgery. I just couldn’t muster the mouth-strength to blow the stupid dust away; I ended up having to hold the DS in front of a high-powered fan to advance.) 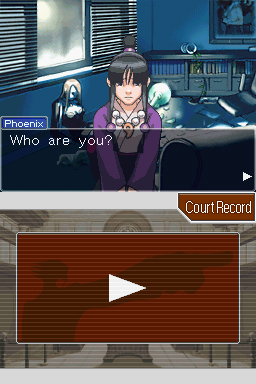 How long would you expect a lawyer sim to last? I was expecting five hours (Note from 2012 Paul: Because legal proceedings are usually so short?), and that barely got me through the second level. Look for around 15-20 hours of gameplay from this $30 title. Don’t expect to be visiting the game much after that initial play-through, though; the puzzles aren’t exactly difficult your second time around. With the challenge gone and with gameplay that isn’t “fun” in and of itself, the only reason to play this game again is either to show it to a friend, or to play it again years later when you’ve forgotten all the puzzles.

For me, Phoenix Wright: Ace Attorney was a killer app. I just had to buy a DS so I could play the lawyer game. If you only like videogames in which, you know, you actually do something, this title might not be for you. But if menus don’t daunt you and if the idea of shouting “Hold it!” while pressing a vile villain about his latest lie sounds totally awesome, Phoenix Wright may be your new favorite game.

The conclusion to our list of the top 50 games ever made.