There isn’t a more despised cheap tactic in the realm of online shooting games than camping.

For those unfamiliar with the term, “camping” is the act of hiding yourself in a tactical point so you can shoot anyone who wanders by unaware. Make no mistake: this playstyle can drive people insane. If you hide or wait in the same spot for too long, you’ll be derided as a cheap player; people will hate you; people will yell and curse at you; people will get so mad at you that they’ll do something totally crazy, like changing the lyrics to a Justin Bieber song and singing it in your honor.

Shooting fans hate campers because they believe the strategy requires no skill whatsoever, yet it can easily take down even the most experienced players.

I gotta be honest with you on this one. I used to get really mad at campers, too, just a couple years ago. But I had to change my mind, since the behavior kept repeating itself in shooting game after shooting game (you know, there’s at least a half-dozen of these things coming out every year) while, on the other hand, the hatred shown to campers has grown to ridiculous proportions.

Why Do People Camp, Anyway?

Easy: it delivers results. Campers get kills, they keep climbing up the scoreboard, and no matter how angry you get at them…it has proven to be an effective winning strategy.

So the real question isn’t why they do it, but can you really blame them?

As far as the game can tell, campers are playing according to the rules. The point of the game is to kill the other guys; it doesn’t specify that you have to actively seek them out. 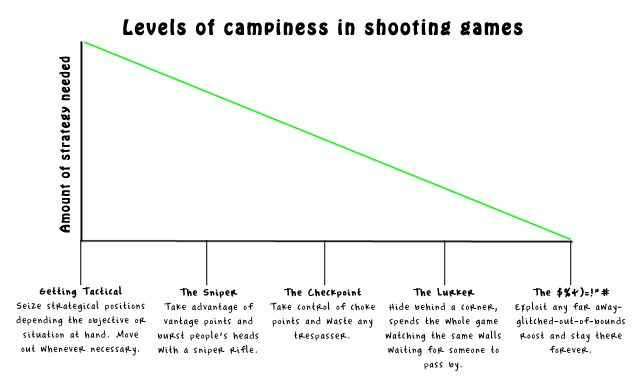 Also, let’s not forget that there’s a huge difference between being a camper and getting tactical.

Well, this pretty much depends on what you hope to get out of the game.

I wouldn’t adopt this playstyle, myself, because sitting there like a bag of moss waiting for the fun to come to me sounds really boring; I prefer getting the hell out into the battlefield and actually joining the fun.

I feel sorry for those guys who are so obsessed with winning that they’re eager to take on such an ass-boring playstyle, but if “winning” is the only thing that matters to some people, then there’s nothing we can do to change their minds. You can’t exactly play the “this doesn’t happen in real life” card in this situation, because in real-life conflicts, soldiers aren’t being randomly deployed into small battlefields, and tasked to kill each other within a certain time limit. And if they were, I bet they wouldn’t be running around shooting each other, but keeping their butts close to cover and holding dear to the precious only life they have.

Russian snipers camping in the Battle of Stalingrad, WWII.

But, it’s OK to Feel Bothered About Campers, Right?

The reason you should get mad at campers is this: they may not be more skillful than you, but they’re playing smarter than you; they know you’re coming, and they know you’ll be reckless enough to fall flat into their trap. You shouldn’t be mad at them, but yourself. You’re the one being careless because you’re only prepared to fight enemies who game according to your fake code of honor, when you should be ready to fight against any kind of playstyle, be it campers, snipers, noob-tubers, or whatever.

I know. They’re not showing any skills when they’re camping, but really…are you? You’re being pinned down by a guy doing practically nothing! There’s obviously a huge flaw in your game if you’re letting that happen. 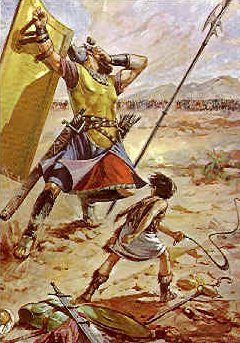 Your skills shouldn’t be useful only against people running around the battlefield; anyone can do that! You gotta be prepared for every possible situation.

What to do Against Campers?

What else? You have to be extra careful and pay even more attention to your surroundings. As the old saying goes: Measure twice, cut once.

You know what to do: avoid falling into their traps, be aware of every corner and room you’re entering. Also, use those grenades, for God’s sake! Send a (tactical or explosive) grenade into any suspicious place before you enter. I know, you don’t want to use them because you might need them later…but you won’t; you’ll be dead, and those grenades won’t be useful in the afterlife.

But if you really don’t want to face campers, you have to…

Stay Away From Death Matches.

Seriously—if you’re playing in free-for-all-kill-everyone-running-and-shooting-madness mode, you have to accept that everything goes, and you’re facing different people with different playstyles that you have to deal with.

If you’re really bothered about playing against campers, you should try objective-based game modes; they’re really fun, and since they’re not just about killing people, there are less people hiding in some dubious corner, and more people actually joining in on the fun of assaulting and/or defending the objective (since guarding your objective is not actually camping, right?)

I’m really sorry if you were expecting something different from this article, but the debate about camping in shooting games has gotten ridiculous. And even though I don’t support this playstyle, the amount of hatred from the rest of the online shooting world is something I can’t endorse anymore.

I could end this by dusting off that old “it’s just a game, guys!” phrase. Remind you that we play these games because they’re fun, and that you should be enjoying the game whether you win or lose. But, I need to address my parting words to those who enjoy winning more than anything else, because they’re the ones so bothered by this. So, this is for you guys:

Do you hate fighting campers? Or do you hate not being able to beat them?

It's one of the more original games to come out in a long while, as well as one of the trippiest.