This classic GameCola article was originally published in June 2006. Tune in to the 10th Anniversary Podcatular this Sunday for a special guest appearance by former GameCola staff writer Shawn Sackenheim!

When I was a kid, there were two things I always wanted to be when I grew up. First I thought it’d be great to be an astronaut, going where no man had gone before and living a life of soap opera drama with alien species. But then I found out you had to be physically fit and smart, so I gave up on that and turned to my second ambition: to one day become a robot. The dance and the voice were easy to master, but I’ve had a really tough time trying to replace my internal organs with silicon and transistors.

But no matter how hopeless it feels and how far off my metallic dream seems, I can always pick myself up with a little Cyborg Justice action. Even before people realized that side-scrolling beat-’em-ups were getting old and repetitive, Sega released this underrated brawler with maneuvers more complicated than actually building a robot. 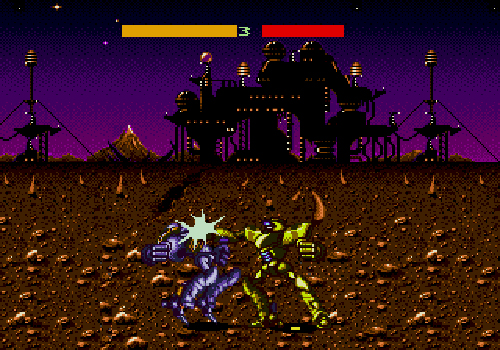 Set in the future (because that’s where robots live), the game offers the barest of backstory. You’re a human in a space ship. It gets hit by a meteor. You crash on a planet. You die. Robot overlords dump your brain into a metal husk and try to wipe your memory, but you resist and are marked for termination. The instruction manual tells a more elaborate story but there’s little else you need to begin the robot carnage.

Cyborg Justice was one of the first games to give players a ton of customization options. Being a robot, at the outset of the game you’re given the opportunity to create your body from a range of hand, torso and leg options. Buzz saws, laser cannons and flamethrowers are how robots shake hands, and though mostly for show, some of the torso options offer increased defense or power. The legs are almost all unique, offering the ability to double jump, move faster, momentarily turn into a tank or deny enemy throws with heavy limbs.

But don’t feel too committed to your initial choice. You’re fighting robots, and thanks to your steel-reinforced strength (or plug-and-play ports), you can quickly rip your opponents apart and take their components for your own. You can also toss them back in their face or drop them to the ground and apologize for accidentally ripping off someone’s arm cannon. You can even put a robot back together after he’s defeated and beat him up again!

Though part-swapping is the game’s most unique aspect, the combat gameplay is nothing short of staggering. It proves overwhelming at first, but with the manual or FAQ at hand, it doesn’t take long to catch on. Despite having no fewer than 20 attacks (with several defensive and recover moves), there are a few that prove to be the most effective. The close-quarters shoulder check is powerful and knocks enemies to the ground, and there’s a grapple move that lets you latch onto your opponent and transfer his energy reserves to your own. It’s the caveat of most every action game, so I can’t dock Cyborg Justice on that one. What I can dock it on, however, is graphics and sound. 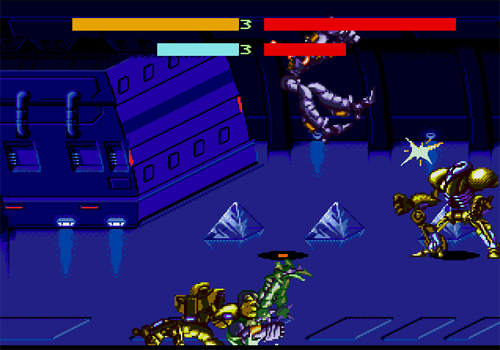 It’s obvious the majority of the Genesis’ power went into the characters. These robots are huge on screen and wonderfully animated (even if they sport the pimp walk), and the ability to tear them apart surely taxes the meager hardware. So that explains why there are only five stale backgrounds that merely change color from stage to stage. It doesn’t detract from the experience, but it sure isn’t pretty.

Sound design is of the typical uninspired Genesis fare. Tinny, grating squeeches abound, but they’re different enough to keep from growing annoying. Every attack seems to have its own effect, creating a cacophony of sound that drowns out the equally sub-par music. I personally like it, but as with the backgrounds it does little to add to the experience; it just kind of grunts along.

You’ve also got two-player co-op in which you can “accidentally” rip your friend’s arm off, or be a buddy and put him back together after he’s been defeated. And with a fighting system as complex as this, it’s no surprise to see a simple one-on-one battle mode with A.I. or live opponents.

But it’s not all electric rainbows and free oil baths in robo-land. Almost every stage has at least one bottomless pit you’ll have to jump over, and for the life of me I just can’t do it. The gameplay isn’t delicate enough for hole-jumping; it makes them an even more challenging opponent than the other robots. The random missiles that force you to stay on your toes are also annoying and confusing (where are they coming from!?). And lastly is the A.I., which is either obscenely tough or ridiculously stupid. A robot will either walk directly into one of the many traps strewn about, or completely work you over.

Aside from the hole-jumping (which may just be me sucking), Cyborg Justice remains a great brawler years after the genre has gone dormant. The gameplay is among the most intricate I’ve seen while still being fast and fun, if you take the time to get used to it. It may lack the visual appeal of Final Fight or Streets of Rage, but it’s provided me with years of fun and valuable training for my next life as a robot.

Shawn Sackenheim is a former staff member from GameCola's early days as a monthly email newsletter.

You know what I'm grateful for? That I can finally write one of these introductory articles without sounding like a total toolbox. The last several "Dear Readers"s have been all about getting more p ...