This is your official save the date. April 22, 2012, is the 10-year anniversary of when I opened up a page on Yahoo Groups and decided “hey, I’d like to write about videogames.” I was in high school at the time, and our “staff” consisted of my best friend, my girlfriend, and basically anybody else from Shawnee who wanted to join. The site’s been a part of my life through high school, through college, through entering the real world and getting a job, and even into my newfound wedded bliss. It’s been with all of us from the GameCube-era though the launch of “the next-gen” (now known as “the gen”), from the fall of the adventure game genre to its eventual resurrection, from “Kingdom Hearts is the Game of the Year!” to “I wish they’d stop making Kingdom Hearts.“

10 years’ worth of ‘Cola. Kinda makes me wanna burp. 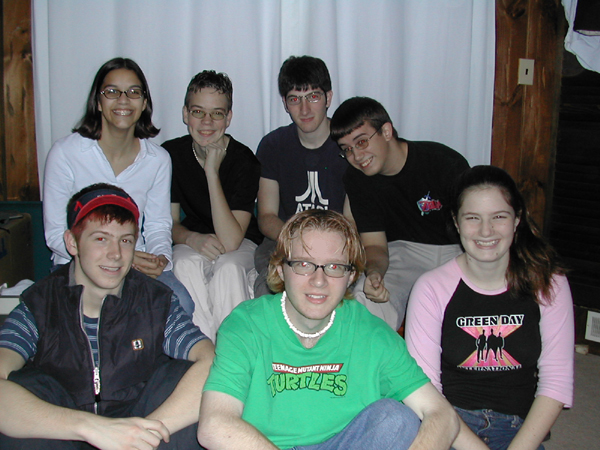 A bunch of high school nerds that founded GameCola in 2002.

We will be streaming the podcast LIVE on our uStream channel, starting at 10 AM on April 22, 2012—interacting with our fans in the chatroom, making great goofs wherein we role-play as the main characters of Tetris and Metroid or perhaps threaten to kill you personally, and trying desperately to come up with things to talk about for 10 hours. (Well, eight hours, anyway—there’s still some mileage left in Phoenix Wright shipping, right?)

Our host Jeddy will be there for the full show, with a new set of GameCola contributors at the top of each hour. Already on the guest list are:

And, you! Yes, YOU! During the 5PM hour, we’ll be opening up the Skype lines to The GameCola Faithful. Wanna join the party? E-mail your Skype username and/or telephone number to podcast@gamecola.net, and you just might get a call from some of the scratchiest beards in gaming.

Missed the podcast? You can still listen to THE WHOLE THING, RIGHT NOW:

Please do listen to THE WHOLE THING, RIGHT NOW, because otherwise we’ll continue speaking to you in ALL CAPS.