Sine Mora is Latin for “without delay,” and there’s no better way to describe the action of a bullet hell shoot-’em-up game. Every move a player makes in this genre needs to be deliberate, precise, and timed perfectly. The slightest mistake when piloting your little ship through a furious barrage of neon bright bullets will almost certainly cause sudden death. It’s a genre famous for its brutal difficulty, where only the most dedicated of players see the first name of the end credits, and only one guy stuck in his mother’s basement for life sees it on Hard/Intense/Brutal/Make-Babies-Cry difficulty.

This is what makes Sine Mora a true breath of fresh air to someone who would love to play more games of this genre, but would also like to see more than the first two stages. It fits the tastes of players who love to see unique and beautiful worlds. It fits story-seekers looking for an interesting character-driven narrative. It fits people who speak Hungarian. It fits the tastes of those who look at shoot ’em ups and say “You know, this would be a great game if it just had a little more genocide in it.”

I wouldn’t have believed this was a Suda51 project until I came across the “Shit! Fuck, Motherfucker, Shit!” line in the game’s first stage. This Grasshopper Manufacture/Digital Reality juncture is a beautiful force for anyone trying to defend the idea that Video Games Are Art. Every level is fantastically realized in glorious detail. Players pilot multiple crafts through war-torn skies, deep sea trenches, infernal factories and underground worlds rich in texture and detail. The level of craftsmanship in making this world come to life is staggering for a game of this genre, and the art team should be applauded for the amazing visual work they performed. 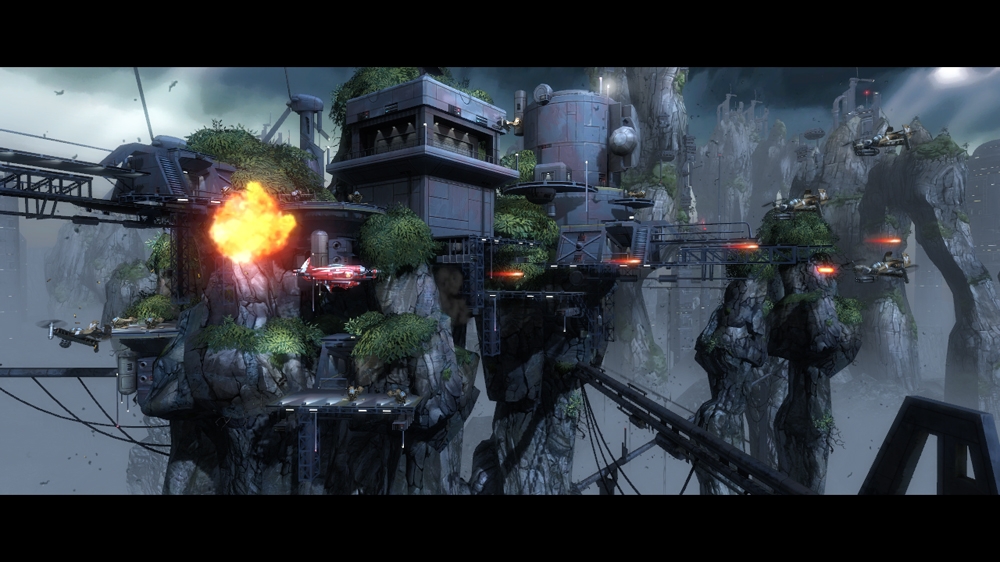 The team that designed the bosses, though? They should be given a goddamn medal. The bosses were designed by anime artist Mahiro Maeda, responsible for works including Neon Genesis Evangelion, The Animatrix, and the animated portions of Kill Bill, and they are by-and-large one of the best parts of the game. These are larger-than-life behemoths that generally take up several screens worth of space, sending off volley after volley of attacks all across the screen. There wasn’t a single moment in these battles when I felt safe, no matter what difficulty I was playing on. A personal favorite of mine was a round against a long, long train that I picked off piece by piece, much like the Macbeth level of Star Fox 64.

That wasn’t the only reminder of Nintendo’s furry space opera, though. The world of Sine Mora is filled with anthropomorphic creatures of its own. Just imagine the cast of Star Fox being able to travel through time, preventing the genocide of an entire race, and going completely off their meds. Sine Mora tells a very adult story, following two sides of a conflict against a dreaded and evil empire, with one side working to save an entire race of time travelers, and the other working to avenge the death of his son during the events of the game’s prologue. The plot is tricky and hard to follow at times; often, levels take place out of order, before or during the events of others. Ultimately though, it provides an enthralling narrative that frames together the gameplay nicely, and is a great incentive to keep playing through the game’s story. Kudos to Digital Reality for giving the shoot ’em up a great storyline to tie it together, and for putting the entire script of the game in the studio’s native language of Hungarian. 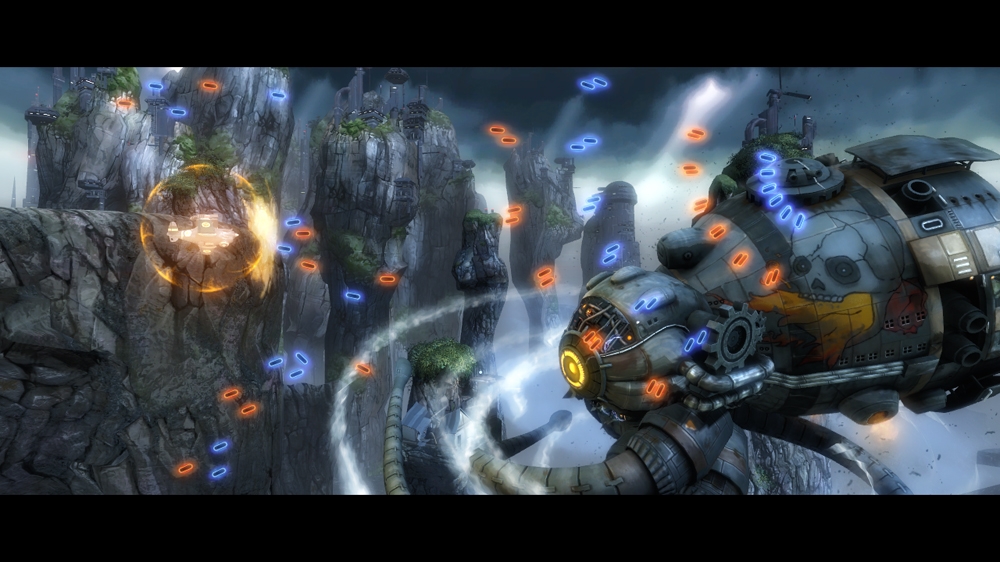 As I said before, timing is everything in this game—up to and including your very life. In place of a traditional health meter, Sine Mora keeps a timer ticking down at all times. Picking up time-extending power-ups and shooting down enemy units extends the timer, while taking shots or running into walls results in a deduction. When the clock runs out, that’s a life. The key difference in the game’s difficulty modes lies in the amount of time you gain with every downed enemy. On Normal difficulty, the time bonuses come often and abundantly, leaving plenty of room for error (although it does horrors to your score). Once you start ratcheting up the difficulty, though, one missed shot or one little collision could run the clock out, leading to an instant game over. The way the game is structured forces the player to play offense just as much as defense. It’s not enough to just dodge the onslaught of enemy attacks; you have to fight back, and you have to fight back FAST.

Luckily, there are plenty of power-ups at play here to help. The color-coded medals that fly to a player’s ship assist with supplying more time and providing ammo for every craft’s sub-weapon (a second weapon that is unique to each craft, which is always powerful and always useful in tight spaces). Red firepower medals upgrade the ship’s primary weapon up to nine times. However, take a hit, and the majority of your firepower medals fly away from the ship, putting players in a dangerous position if they want to take the risk of gathering them back together. Blue capsule power-ups fill up your time gauge, which is used to temporarily slow down time in order to dodge a tricky wave of bullets, or slow enemy craft to make them an easier target. Finally, score tokens, labeled with the amount they’re worth, are crucial to anyone looking for a high score. Their value goes up with each one you can collect without missing any. As soon as you fail to collect one, the streak ends, and the point value sinks to 1,000 all over again. 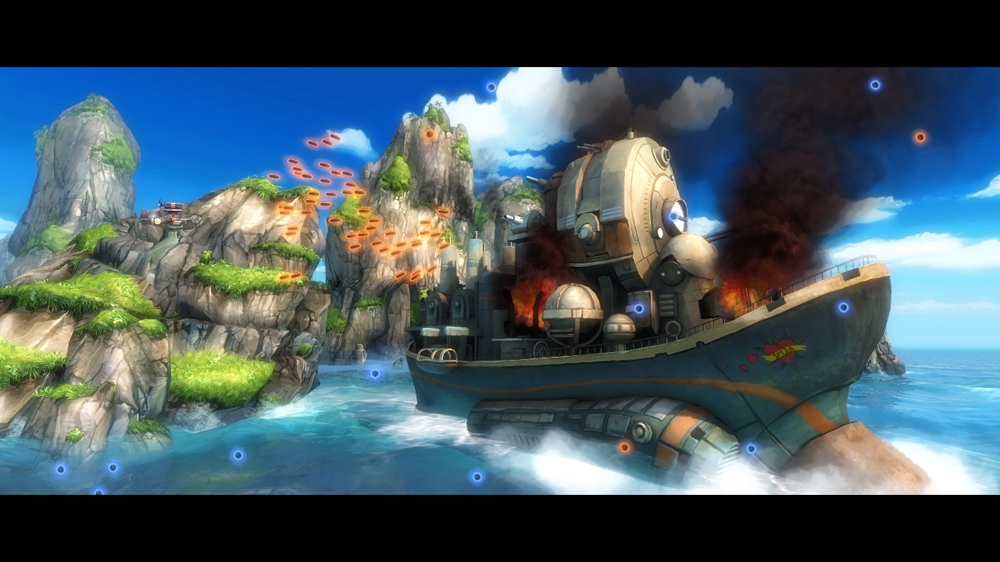 Sine Mora does an absolutely fantastic job of allowing players new to shoot ’em ups a chance to get into this beloved genre. I absolutely loved my time with the game. (Although, I will mention that my experience with it was kept mostly to the game’s story mode, on Normal difficulty; I couldn’t even get past the octopus boss on Arcade Mode. Not yet, anyway. Gimme six more weeks. And a new controller to replace the one I threw out the fifth-story window.) I still find myself coming back to it constantly to rack up a high score, or maybe not die so much or not run into those stupid walls so much, and so on. If you’re up for some crazy exciting bullet hell action with a confusing, but compelling, story, I suggest Sine Mora to you with all of my heart.