Is this a walking dud? Let’s see.

Lee Everett finds himself on a one-way ticket to death row. He must have screwed up real bad. We don’t know whether he is innocent or if the sod is as guilty as a pig in shit. This is just one of many plot threads just waiting to be ripped apart in Telltale’s The Walking Dead.

To start off with, Lee has to free himself from the wreckage of a crashed police car. Normally, this wouldn’t be a problem for anybody. A crashed car? No hassle. But what about while wearing handcuffs and with an injured leg? Not so big now, Houdini.

Well, whoops! You’ve broken your leg even more. Good luck walking on that.

You soon discover a little girl named Clementine. You’d probably be on better terms with her if you didn’t maul her babysitter to death. To be fair, the sitter did become a zombie and everything.

You hitch a ride with some fools to a farm, where shit GOES DOWN. You make a break for the nearest town and well, things get ugly.

There are choices you must make, some of which directly effect the outcome of whether someone lives or dies. It would be nice if these choices weren’t so black and white—it is literally a choice between “save person 1” and “save person 2”. Whoever you don’t save obviously becomes zombie chow, because it would be dumb if we could save both people.

If it doesn’t matter who lives and dies, then why should it matter if I have to pick? You’re just playing with my emotions.

There’s a lot of bad language. The game is also rated M for Mature, so you’ll see some serious shit. Oh, if you like gore, you’ll get some. But that isn’t what the game is about. 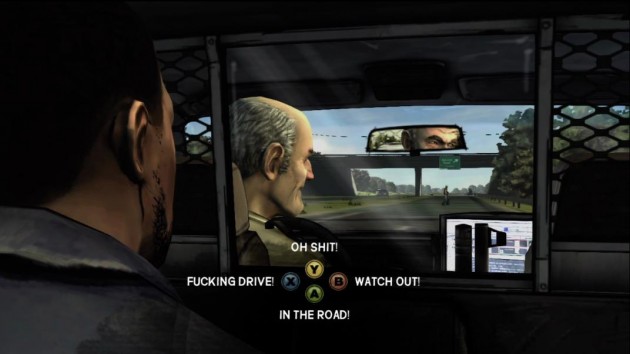 The Walking Dead is about the humans more than the zombies. You’re going to meet characters that you could swear are real people. These characters may come to respect and trust you over time. They might question your actions and become bitter or spiteful. Some characters know more about Lee than we do, and his little “life sentence” he’s managed to escape from.

Maybe you can get them to trust you, if not they might punch your lights out and leave you for dead while the zombies are breaking in. I won’t forget that, Larry. Tell anyone I’m a murderer, and I’ll add you to the list.

I felt that the characters in this game are memorable, something that I usually don’t find true when I’m playing an adventure game. Glenn, from the comic and television series, makes an appearance in this episode. The actor providing his voice is not the same as the television series, but I don’t think there is much of a difference.

The voice acting is good. The sound direction is decent. With all due respect, Telltale gets the voice direction or sound correct most of the time. The quality of the acting makes the people seem more human than they already did. I also condone the use of thick accents in games, and I am pleased that each character seems to speak in an elaborately exaggerated fashion. Well done. 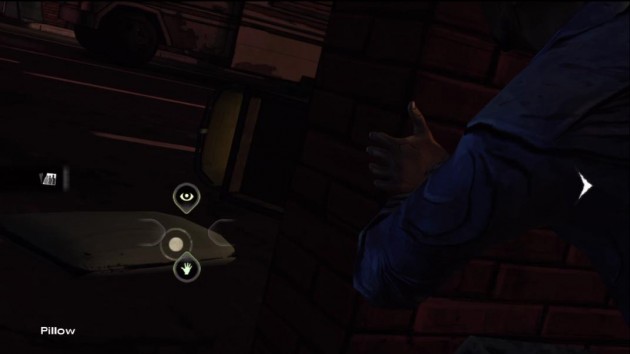 Now to comment on the visuals. These screenshots speak for themselves, so everything I say here is rather unnecessary.

The game is a sight to behold. Beauty is in the eye of the beholder. This game is beautiful. The environments seem almost real. The style careens smoothly between realism and comic book style without any flaws. The little elements such as sparks, dust and lighting really helps the areas stand out.

Perhaps the drug store could have been made less cluttered. I know that a messy store is far more realistic, but trying to perform actions with the seven-or-so NPCs in that scene just made things difficult.

As for the characters themselves, there is a lot of expression. The characters all look very human when it comes to talking and taking basic actions. A few of the animations still have that Sam & Max cartoony style to them; I just accept it as a trait of Telltale’s because it doesn’t detract from the experience too much.

The textures look good. Especially on the characters and the walkers. I am impressed.

There are times when the game collapses and the graphics have a hard time keeping up. Especially around Hershel’s Farm, and at the zombie-bashing finale of Episode 1. Hopefully no more of that immersion-breaking slowdown will appear in future episodes. 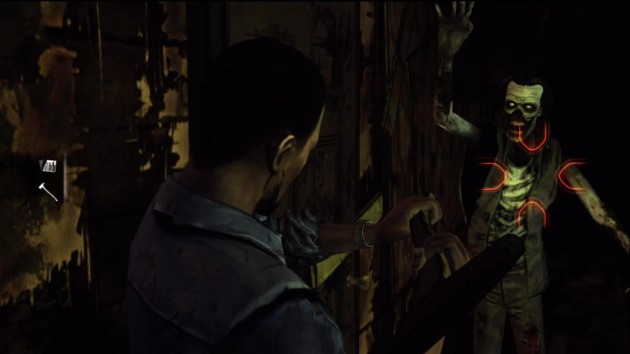 It is viscerally satisfying when you get to ditch one of the walkers.

This isn’t a short game, either. This episode clocks in at about three hours or so. Maybe a little bit longer if you bust your balls over every side quest. The different choices you make result in subtle changes to the story. This promotes multiple play-throughs. Telltale promise that your choices in the first episode will echo all the way through until the end of the game. I cannot wait to see whether I get a red, green or blue ending after all my hard work. #masseffect3

I do have some minor gripes. I always like keeping the negative stuff ’til last; it has more of an impact that way. Sometimes the speech begins before the loading screen disappears, and the game immediately speeds up and then slows down to sync with the voices.

One puzzle sees Lee trying to get into a car so that he can take an item from inside. The player can find a pillow. If you try to use the pillow on the car window, Glen chastises you. Am I the only person who thinks that putting the pillow up against the window, and then punching the window through with the pillow in the way, will dull the sound? Sure, it would still be loud. But the pillow would mute the sound of a window getting smashed better than it can muffle the sound of a bloody gunshot, which is what you will end up using it for.

Also, Lee needs to get a brick at one point so that he can destroy a window. The players spots a cane earlier in the game but cannot take it with them. Surely Lee could bring the brick toward himself by using the cane? No, instead, Lee has to go through a whole massive sidequest just to get an axe so he can chop the lock off the door to get the brick, thereby endangering his life.

But how is he going to be able to throw that brick without getting past the gate? You’re stupid, Matt. You’re stupid. 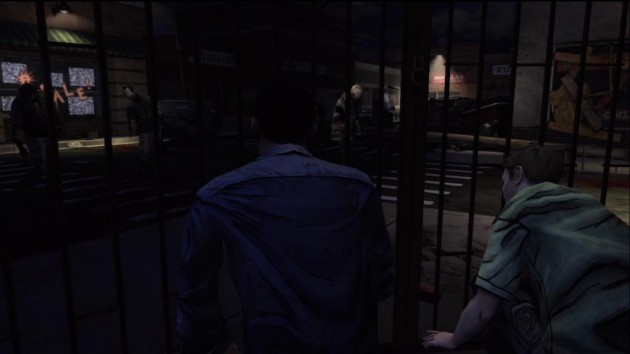 As always, there will be logic you don’t agree with in adventure games. The sign of a good adventure game isn’t having to dumb down the puzzles, just give a little clue every now and then. However, I have no right to moan. I played the game with the clues turned off because I wanted the authentic zombie experience.

I do look forward to the following episodes. If the quality of the writing, audio and visuals remain consistent, then I will no doubt enjoy playing the rest of this series. And so will you, I’d wager. From what I can tell, fans of the franchise should dig this game too.

If Telltale tries a little harder to iron out the smaller issues like the framerate stutter, then it could be a lot better.