I’ve just had an epiphany. The previous console generation was the best of them all and probably will stay the best forever. Forget the Xbox 360 and the PlayStation 3—the real games are back on the PlayStation 2. This is seriously one of the greatest platformers that I have ever played. How did I ever miss this spectacular gemstone back in the day?

Ape Escape 3 is definitely the best in the series. So what makes this game really great? You could say that the game is almost magical. The perfect balance of dumb fun and challenge. Never too hard, never too easy. A wonderful treat, ever so rare.

The Ape Escape games focus on the evil Specter, a white monkey who is constantly trying to destroy the world. Each time, you are tasked with defeating him and putting an end to his evil ways. This time, however, the white monkey is not alone in his diabolical schemes; assisting him is the faaaabulous Dr. Tomuki. 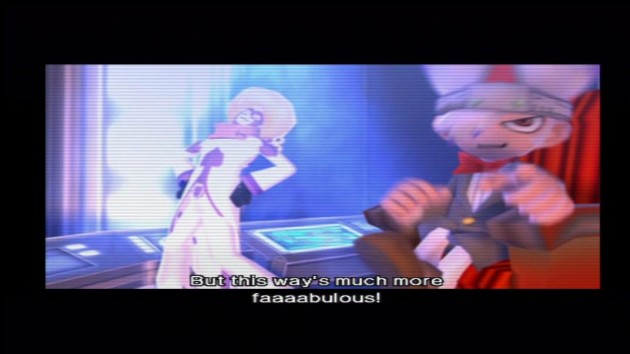 Specter and Tomuki plan to enslave the human race by forcing them to watch mind-numbingly bad television. Everything they offer is still better than British TV on a Saturday night; I’d happily watch Specter TV programming over Strictly Come Prancing.

This time around, you can play as Satoru or Sayaka (Kei or Yumi in your region). They are twin siblings who look nothing alike. You are only going to want to play as Sayaka. She can stun some of the monkeys merely by looking at them. This is because Sayaka is actually a platinum-selling musician.

I would just like to reiterate that this probably isn’t possible. And that if it were possible, then 80% of her record sales would be from Otaku. 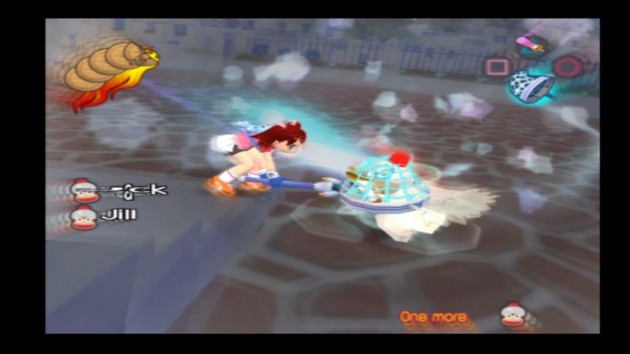 So basically, the story is really heart-warming and quirky. If you like that sort of thing then you’ll love this. If you don’t like charming fluffy stuff, then grow a damn heart in that chest of yours.

How to conduct Monkey Business.

Your job, as the ever omniscient and omnipresent gamer, is to help Sayaka capture some monkeys. To do that, you have to teleport into each Specter TV show and capture all of the monkeys. To capture monkeys, you need to swing the Monkey Net toward them and catch them inside it.

It sounds like trouble. It isn’t, though. It is fun. Remember fun?

This variety of fun is mostly derived from the new transformation feature, the MorphWatch. As you progress through the game, you collect personae that you can morph into. You can become a magical knight, a wild west kid, a miracle ninja, a genie charmer and a bunch of other zany forms. My favorite is the ninja, obviously. It makes you really fast, and you can do some crazy acrobatic stunts like running on walls. 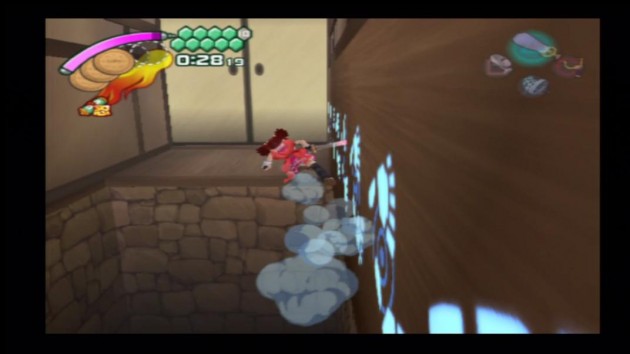 Each transformation has its own stage completion animation and its own jingle that plays when it’s activated. A lot of thought went into this.

So you capture monkeys, but it isn’t easy. Some monkeys are timid and offer no threat, while others will steal the Monkey Net from you and attempt to capture you instead. You should use the Monkey Radar to wrangle out this information, because it will make the job of capturing these monkeys so much easier if you know they’re likely to get violent. 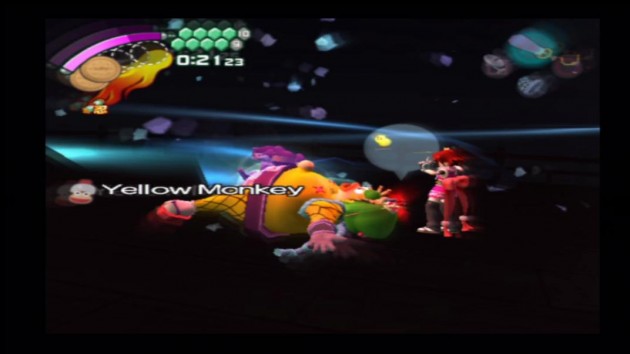 We know that comedy in videogames doesn’t exist, but Ape Escape 3 comes close to it. The writing is really good, and the characters are amusing. I really like how lippy Sayaka can get with some of the bosses. She is actually a master of backchat. On the downside, the game is re-dubbed in the European region with British accents, so all of the jokes are no longer funny. I would actually prefer if everyone didn’t sound like they came from cockney London town. Also, the farting boss is the worst thing ever.

A game with its own style and unique approach, such as Ape Escape 3, is still an amazing game despite dialogue flaws. Ignore the cockneys, hell—in your version the voice acting is probably a hundred times better. This game still looks incredible and feels really good to control. 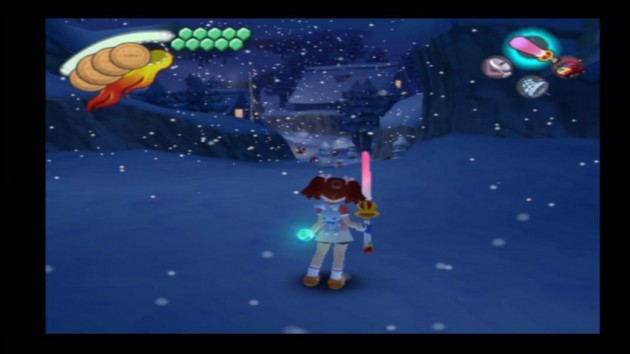 This is what I mean by “looks incredible.” Falling snow, all animated. Smoothy drawn, it floats down mildly toward the ground. It adds depth to the scene. Everything is so well defined and formed; the artists on this project knew exactly what they were going for and nailed it completely. Everything has been thought through several times until it was mathematically, precisely decided. Beautifully made, this is picture-postcard quality.

Not even Crysis looks this good. 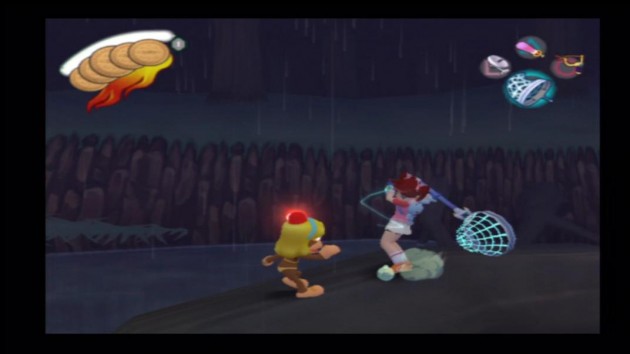 PlayStation 2 owners, or those lucky enough to have a backward-compatible PlayStation 3, should seek this game out and play it through. It isn’t too difficult, but it isn’t a cakewalk, either. The whole game is beautifully fashioned and it left me gasping for more like some kind of gaming addict. The good news is that you can continue from your completed game save and capture the remaining monkeys, which gives the game a very high level of replayability.

If you really want to see the cutscenes for the other character, it gives you another reason to start the game over from the beginning. And you realistically can, as the game is a short little romp. It is well worth your time and money, and is an overlooked gem. Quite frankly the best in the series and a must-play for any platformer fan, Ape Escape 3 gets my seal of approval. 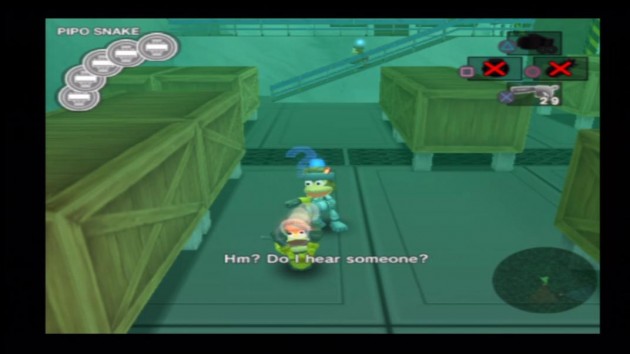 Solid Snake fans should also take note that Ape Escape 3 has an unlockable game called Mesal Gear Solid. It isn’t any good, not even remotely so, but Metal Gear Solid fans will praise the effort even though the voice acting is horrid and completely wrong. It is a fitting acknowledgement and loving nod to Metal Gear Solid 3‘s Snake vs. Monkey feature.

Overall, Ape Escape 3 is a masterpiece from the final closing days of the PlayStation 2. A gaming experience meant for a king. A truly splendiferous diamond of a game.

You know that thing you're always afraid of happening with games released as a series of episodes? The thing where the new episodes released aren't as good as the previous episodes? Well that thing ha