All right, we’re back again. As you may recall from the last edition of “Gamera Obscura,” our resident grumpypuss, the Ominous Voice, has been rather subdued, thanks to prescribed medicine to reduce his vile outbursts and to keep him calm. Although it’s nice that he’s getting help for his supposed issues, I’m actually a bit saddened by this unfortunate turn of events. “Gamera Obscura” will never be the same without him.

Speaking of the Ominous Voice, where is he? I don’t see (or hear) him around. Wow. He must be gone. This column sure feels lonely without the poor fellow. I think I see tumbleweeds passing by. Well, if there’s nothing else left to cover, I’d best get right to the game of the month. This time around, we’re going to be looking to the Land of the Rising Sun, Japan, for a Wii game entitled Billy’s Boot Camp: Wii de Enjoy Diet! This is a Japan-only game that more or less serves to wedge another exercise game into a genre already dominated by Wii Fit.

Billy is indeed who you likely think he is: Billy Blanks, that Tae Bo-loving character that took America by storm a long time ago with his dancercising home videos and then faded into relative obscurity in more recent years. Apparently, someone must love Billy Blanks in Japan, because developer Rocket Company decided that the world needed even more of his influence, just in videogames instead of the standard squat-and-thrust-inducing DVDs. And you can just tell that the game is awesome. Look at this cover: 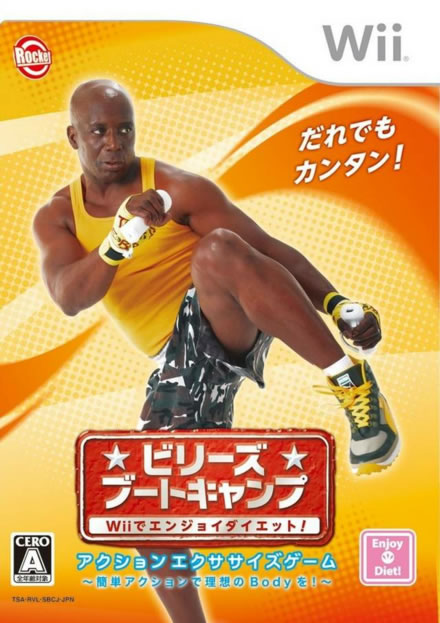 Billy Blanks means business. But now, either using your Wiimotes or that lovable Wii Balance Board, you can jam along with Billy as he performs some of his amazing moves. And, of course, he’s joined by a number of fellow exercise enthusiasts who have been carefully screened to ensure they don’t look like graduates of Ugly Tree Academy. You can also have the game adapt to your workout preferences, including preparing a specific schedule to suit your needs or focusing on target muscle areas. The odd thing: There isn’t a lot here that pertains specifically to enjoying your diet, as the game’s title may suggest. Billy Blanks’ specialty is thrusting his loins forward, not thrusting pork loins into the oven at 350°.

Overall, if you’re in Japan and you’re looking to get fit in a new way, you may want to seek–

WHAT THE HELL IS GOING ON IN HERE?

Whoa! We were all waiting for you! Where have you been?

LOOKS LIKE MY ALARM CLOCK DECIDED TO FALL IN THE DAMN TOILET LAST NIGHT AND I DIDN’T WAKE UP UNTIL TEN MINUTES AGO!

I’m sorry, but you’ve missed the obscure game of the month.

GUESS SOMETHING GOOD HAPPENED AFTER ALL!

Wait a second. You don’t sound calm anymore! What happened to your medication?

THAT STUFF? OH, I GOT RID OF THAT. IT WAS GOOD FOR KEEPING ME MELLOW, BUT THE DIARRHEA THAT CAME WITH IT JUST WASN’T WORTH IT. I GAVE THE REST OF THE PILLS TO MY GOLDFISH. TOO BAD HE ENDED UP WITH THE SAME SYMPTOMS.

Huh. Well, I guess all is back to normal now. See you next month!

Scott Pilgrim Vs. The World gets online multiplayer—two years after the fact.