Journey’s success suggested it, sales of The Walking Dead’s episodic content confirmed it: Today’s players want their gaming in short bursts. Gone are the days of long, drawn out campaigns. Gamers no longer want to endure some complex, convoluted story that can take up to six hours to complete. In 2012, players want to go from start to finish in two hours.

But what about in the future?

As a society we’re getting busier—our leisure time is dwindling, our lives are moving at an increasingly faster pace. In 2013 and beyond, a two-hour gaming session will seem like a marathon. We’ll want our gaming in shorter and shorter bursts. Thankfully, game developers are starting to make their games…burstier, as evidenced by these Sony and Microsoft documents I found in a bin. Here are some details from next year’s releases:

Remember when the character you controlled in Modern Warfare died, and you were like, OMG, I’m totally trapped in a corpse? Then the game transported you into someone else and you were like, This is cool, because I can still shoot people, but I really enjoyed dying. Activision was listening.

In 2013, live out the full death experience in Modern Farewell, a new download only experience from the creators of Modern Warfare. Over two distinct levels, enjoy dying the Modern Warfare way. Push that thumbstick—it won’t do anything because your legs are broken. Pull that trigger all you want—you can’t shoot because the gun is stuck in your legs. Await death’s arrival in ever darkening shades of black, all in full HD. (Pre-order now and receive a free Corpse avatar on Xbox Live.) 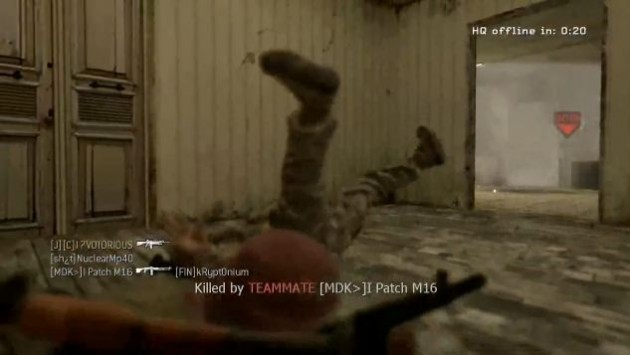 Screenshot from an early build of Modern Farewell.

Turn your PlayStation 3 off. How much fun was that? If you enjoyed it, then you’re bound to love the new gaming experience from French developer Quantic Dream. Long Press simulates the act of turning off your PS3. Enjoy the interactive feeling of switching your machine to standby, with none of the real-world consequences. French visionary David Cage’s new creation plays classical music (with occasional raps from the man himself) while you long press on your controller’s PS button and enjoy a simulation of the system menu. Oh no, you’ve switched off! Don’t worry, it’s only a game. Turn off, or not, til your heart’s content; your PS3 will stay on regardless. (PS3 must be switched on to play. Trophies available.)

Do you enjoy the world of Elder Scrolls V: Skyrim, but just don’t have the time to explore it any more? Bethesda’s got your ass covered. This standalone game allows you to partake in a fantastic race around sections of Skyrim’s map. Take in the sights at blistering speed; get limbered up for some frantic sprinting through forests and up hills for distances of up to 600 digital metres. Choose the right combination of armour, magic and Nike Shox to make your runner the fastest Dragonborn he can be. (Kinect only.)

HAHAHA IT IS ME YOU FOOLS