To be quite honest, I was incredibly skeptical of Overwatch when it was first announced. Blizzard, working on a first-person shooter? It just didn’t really seem like a good fit for the developer. It’s like hearing that Infinity Ward is working on an RPG or CD Projekt Red is doing a puzzle game. Developers fall into these niches that alter our expectations for anything that they may create. More so than that, a lot of genres these days have settled into this comfortable niche and some have actually become quite predictable, especially the FPS.  However, Overwatch is definitely going to make me reconsider jumping to these conclusions with any future game that may be released.

One might draw many parallels between Overwatch and Team Fortress 2. The comparison is almost impossible to avoid, but Overwatch itself does have several things that set it apart—not only from Team Fortress 2 but from every other FPS on the market today. 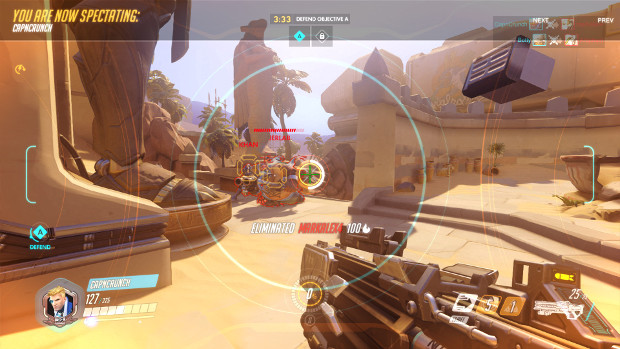 Overwatch has launched with 21 available heroes, with more planned to be released at a later date for free. With the advent of games such as League of Legends offering over 100 heroes to play with, this might seem like a small offer in comparison. Thankfully, the quality of Overwatch’s heroes definitely overshadows any sort of arguments over quantity. You’re given characters that fill one of the four roles present in the game: Offense, Defense, Tank and Support. Most characters come with a primary and secondary weapon, two skills and an ultimate ability that charges throughout the game waiting to be unleashed for often devastating effects. Some have more, some less, but that’s the standard. These unique abilities and weapons make each character feel truly special, and allow each character to tackle their role in drastically different ways.

You may be like me and feel comfier trying tanking as Reinhardt with his large shield and brutal charge attack, shielding your team from harm and removing threats before they can really wreak havoc on your allies. Or, you may prefer a more active approach, isolating enemies and taking them out with a shotgun using self-proclaimed “One-Man Apocalypse”, Roadhog. When on Offense you may enjoy going back to your Call of Duty roots and using the classically-designed Soldier: 76 with his machine gun, rocket launcher, and visor—complete with auto-aim. Not a fan of that Call of Duty design? Play as resident cyborg-ninja Genji and laugh as you deflect the enemy’s attacks right back at them (looking at you, Bastion) before finishing them off with your sword.

There may be one character you favor above all of the rest in terms of kit and design, but with so many fun and unique heroes to pick from, you can be sure you’ll find multiple heroes across every role to enjoy. None of them ever seem like a bore, both in terms of playstyle and personality, and that’s rare in a genre that usually leads to players picking up one character, weapon or role and forsaking all the rest. And it’s not just their playstyle that prevents them from being boring. Each character has a backstory that Blizzard has created. While not present in the game itself, the additional comics and films Blizzard releases along with the game ensure that even generic-looking characters like Soldier: 76 come across as likable. 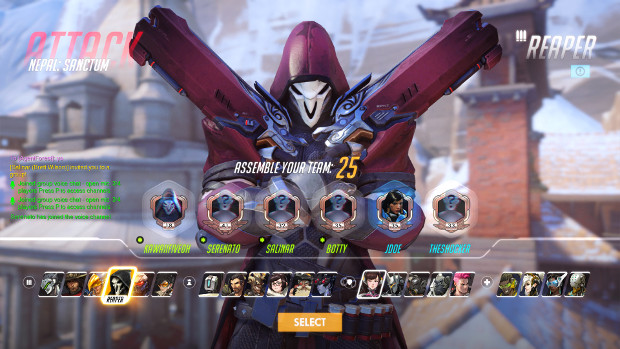 But even with some characters having fairly basic designs, the overall cast of Overwatch is incredibly diverse and entertaining. Blizzard has managed to include a wide array of characters ranging from the incredibly muscular Russian defender Zarya to the stout Swedish Dwarf Torbjorn to a giant gorilla in a space suit known as Winston. It’s incredibly refreshing to see a genre largely dominated by various army guys with no real personality to actually have a game that has interesting character designs. And as an added bonus, Blizzard’s designs seem fair and balanced with your stereotypical “sexy” characters wonderfully offset by others ranging from muscular to heavy-set to robots. This ensures that everyone can find a character to suit whatever their particular tastes are in Overwatch. It doesn’t cater to one specific demographic and that’s a wonderful thing. 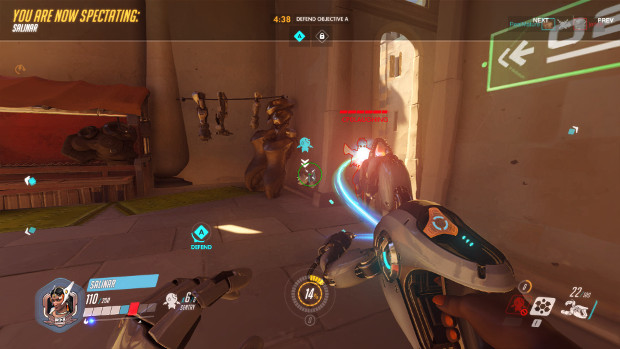 In addition to knowledge of each of the characters, players will need to become familiar with the twelve maps Overwatch has on offer. Each of these maps is absolutely gorgeous, and incredibly well-designed, with choke points, sniper perches, and ambush points littered throughout. It’s such a joy to have a FPS with maps that are more than just varying shades of brown and grey. As you play, knowing these maps will become almost second nature to you, and knowing things like where health power-ups are, and which heroes work on which maps, will definitely contribute to your victory. I can attest to this fact, learning just recently that using the two go-to turret builders, Torbjorn and Symmetra, on the Volskaya Industries map creates an impenetrable wall that all but the most skilled players will have difficulty passing.

Blizzard has taken this traditional concept of map design and expanded upon it immensely with the inclusion of these different heroes. Even when in the lobby of a match players will actively be discussing map layouts, informing each other about which heroes work best not only on different maps but on different SECTIONS of the map. In all the years I’ve played Call of Duty and Halo I’ve never had in-depth discussions of map designs in any random multiplayer game. The added heroes help keep certain maps fast and frantic, forcing people to constantly alter their team composition and playstyle to avoid being trampled over. Like the aforementioned Torbjorn setup above there are maps where I absolutely cannot wait to get to certain sections to utilize some incredibly strong characters. It just stays that interesting.

Overwatch has a lot of things on offer that previous FPS titles have had before. It doesn’t really do much that one would consider incredibly innovative—but the attention to detail and level of polish the game has not only makes it incredibly enjoyable to play, but will also actively help players become better at the game.

The biggest contributor to this is Overwatch’s sound design. Characters will announce to the player changes in their environment. “Enemy turret ahead!” “Sniper! Be careful!” Reinhardt’s heavy footsteps will echo through hallways, letting weaker characters know that there’s a large enemy ahead they may not want to tangle with alone. The weapons each character has on offer make unique sounds as well. You’ll be able to tell who is lurking around the corner from even things as simple as the sound of Tracer’s pistols, the signature “thwack” of Hanzo’s bow-string and the “crackle” of Winston’s lightning cannon. Ultimates sound unique depending on the situation as well.

Enemies will announce their ultimate abilities loudly and the sound effects of their abilities are incredibly noticeable while allied ultimates and effects will be quieter. As a nice little touch, some enemy characters will even announce their ultimate ability in their native language—Hanzo’s “Ryuu ga waga teki wo kurau!” being a great example of a personal touch that has caused many players to stare at their screen in abject terror over what’s about to happen. Characters even have different quotes depending on whether or not they’re on your team. Never before have I seen sound design play such a crucial role in making players better. 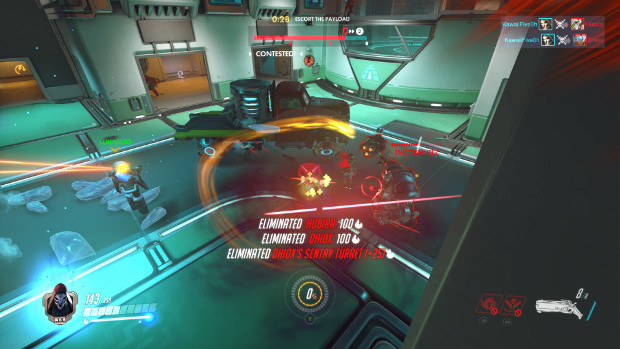 Each character’s design also helps the player improve by making enemies easily recognizable from a distance with a red outline, so you’ll always know who you’re shooting at. This is quite an excellent change for a genre where so many players look the same that you’re often not prepared for the weapons they have on hand until it is far too late. It’s very difficult to be caught unprepared during a frontal assault in Overwatch. Usually, you’ll just be surprised by characters designed to ambush you, as intended.

It even seems as though this multiplayer experience will have staying power with Blizzard’s planned way to release content. Once you own the game, all future characters and maps will be provided as free updates. This actually makes the prospect of this future planned content incredibly exciting, and promises to keep the community together. It’s incredibly frustrating when a game introduces a new map rotation that excludes players that haven’t purchased the latest map pack, the most current example being EA’s Star Wars: Battlefront. It’s good to know that something as simple as a paywall won’t keep the community from continuing to play with everyone else, just as they have since release. 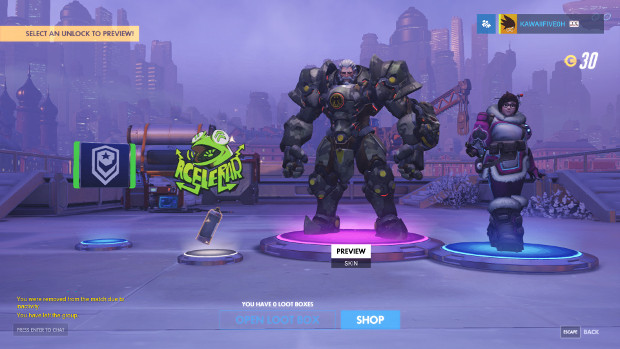 Overwatch is a game anyone can instantly jump into and enjoy providing a focused and well-polished experience that is nothing short of incredible. It’s a shooter that breaks the current mold of drab, sci-fi, military FPS games on the market today by focusing on being an absolute blast to play. It’s a game that’s pure, unadulterated fun, and in that regard, it is a massive success.

When all is said and done, Overwatch succeeds on a level I had never thought possible. Blizzard has somehow made lightning strike twice (or three, four—five times), and created a game that is not only charming in its presentation, but incredibly fun to play. Despite this being Blizzard’s first foray into the genre, they’re really showing what an experienced AAA developer can bring to the table in terms of design and execution.

Some say that only indies can bring creativity to the gaming scene, yet here’s Overwatch showing what a major, established developer is capable of when they try something new.

Besides destroying the videogame industry forever and ever, Kinect also does something kinda cool---it can turn your body and living room into a galaxy, albeit unintentionally. Assuming you have night