I’d like to start out this review by saying that, normally, adventure/puzzle games typically aren’t my thing, even though I seem to be starting on a streak of them here at GameCola. I tend to prefer things like running, shooting, or slashing to finding out how many different ways I can use a rubber chicken to cross a moat (hint: there’s only one way, and it requires you to find some totally obscure object from the beginning of the game). More often than not, adventure games make me “frustrated,” which is another way of saying they “cause me to throw a temper tantrum and cry like a little girl until Vangie gets fed up and looks for the answer online.”

Fortunately, Metal Dead did not elicit any of these responses. Somewhere out there, Vangie is right now breathing a sigh of relief. 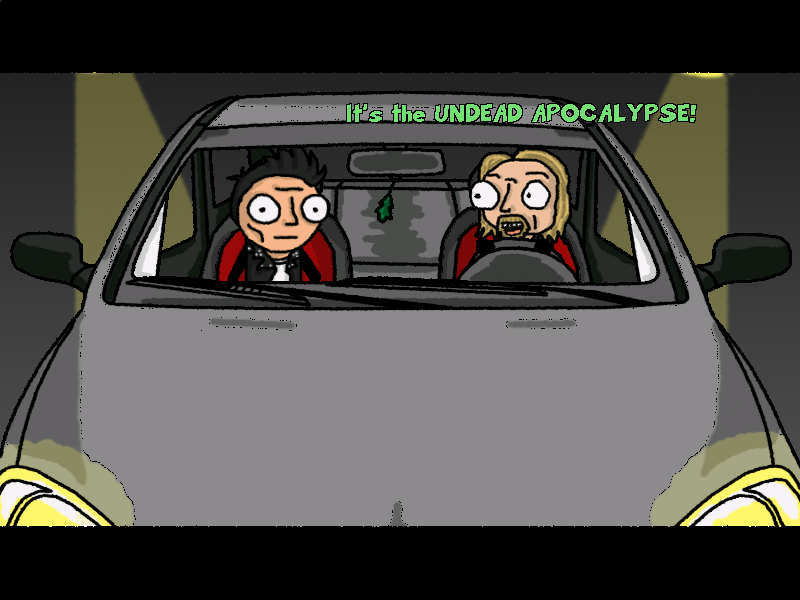 Created by Walk Thru Walls Studios and for sale on Indievania for $5, Metal Dead is an adventure game starring two metal-heads, Malcolm and Ronnie, as they attempt to solve the mystery of a zombie infestation plaguing their city. Their search leads them to the offices of the MediGeniTech company, where they encounter a number of other, mostly sane, survivors and proceed to solve a number of puzzles in order to escape the building and (hopefully) unravel the riddle of the undead plague. The narrative combines horror and comedy elements to provide a story that is both entertaining and surprisingly poignant at times.

OK, now that we’re through the obligatory funny introduction and background information, let’s get down to brass tacks: this is the first game from a small indie studio, and it’s not half bad! Walk Thru Walls manages to capture a lot of the feel of past adventure games (e.g., Monkey Island) while creating its own distinct style; I think they’ve done a great job, especially considering it’s their first attempt. The graphics are simple hand-drawn pictures animated with Flash. While the drawings are a little crude, they serve to enhance the indie feel of the game and give it a unique look. The sound design is equally simple, consisting of little more than a MIDI soundtrack and sfx, which does a lot of work at times to simulate heavy metal. If I have one gripe with the game, it’d be that the soundtrack wasn’t a little more extensive (what can I say, I’m a sucker for good soundtracks).

The game is short; I beat it in about five hours, but those five hours were pretty enjoyable. The puzzles are taxing without being frustrating, and the game provides a rather humorous system for giving hints. Jokes ranging from corny to crude to dark fill the game, and while Metal Dead is not up to Monkey Island levels in terms of zaniness, it manages to come close (also Malcolm accidentally steps in poop at one point, heh). Most of the game’s supporting characters seem to be drawn from the stock selection of “quirky” characters you see in a lot adventure/zombie games (e.g. the crazy gun guy, the gruff cop, the stoner, etc.), but there were a few that were actually pretty inspired, including the main antagonist (although I’ll leave the details as a surprise!). Additionally, the creators of the game went the extra mile of adding humorous achievements into the game, and I had a good time searching for them and chuckling at their referential nature once I found them. 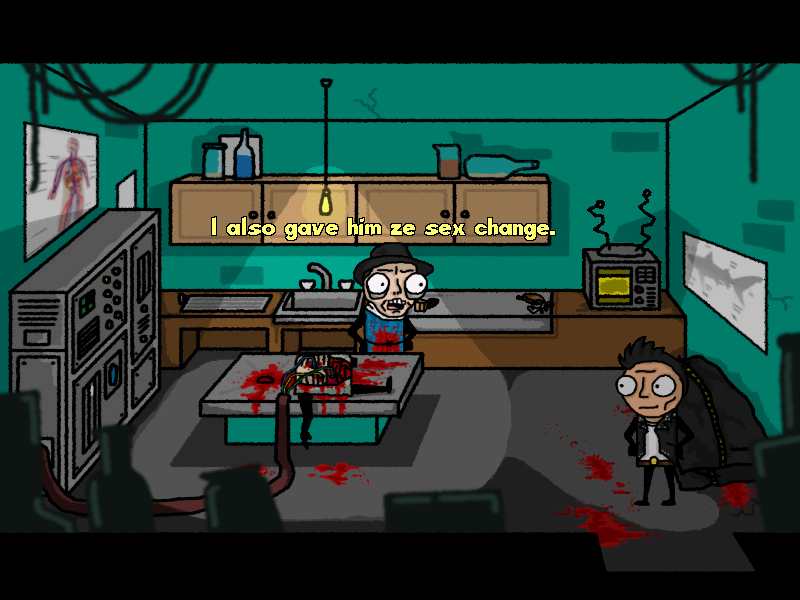 Metal Dead is not without its flaws; but when the game is considered as a whole, these flaws tend to fall away, leaving a very solid adventure gaming experience. Considering its length and price, I highly recommend trying it some afternoon when you’re looking for something laid back and fun to do. Die-hard metal and/or zombie fans should also definitely give it a look. According to Walk Thru Walls, Metal Dead is only the first in a series of metal-inspired adventure games, and after playing their initial offering I’m rather excited to see what they come up with next.