I am TERRIFIED of undead children. I can deal with just about anything else, but give me zombie children, ghost children, or anything else that’s little, dead, and moving, and I freak right the hell out. So, when GameCola’s fearless leader Beardface the Red asked for someone to play and review Team Gris Gris and XSeed Game’s new survival horror game Corpse Party for the PSP, I quickly jumped up and said yes. Unfortunately, in my eagerness to try a new game, I neglected to read the part about it being set in a school haunted by a variety of ghost children, thereby proving once again that I should REALLY pay more attention to these things.

Corpse Party, which is based on the popular manga serial of the same name, is a survival horror game with adventure elements set in a haunted school where a number of vengeful spirits have turned the building into a hellish deathtrap for all who enter. After performing a seemingly harmless friendship ritual, a group of students and their teacher are transported to the school, where they must work together to find their way out. They quickly find that escape will not be easy, and that the spirits of the school are searching for them, seeking to add the misery of the living to their own. The characters must explore the school, gather items, and unlock new areas in order to unravel the mystery of the school if they ever hope to find their way home. 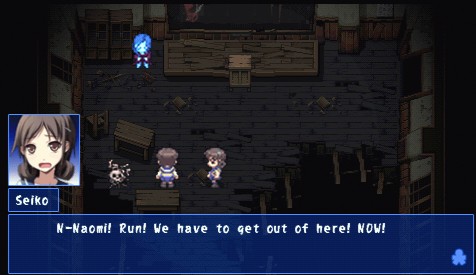 I wasn’t sure what to expect going into this game, but it does a lot of things right. The visual style is pretty different from most survival horror games out there, utilizing a top-down style reminiscent of SNES RPGs like Final Fantasy VI. Players explore the school this way, and the game is interspersed with cut shots of important events such as a character discovering an item, stumbling upon a body, or experiencing some form of gruesome demise. The art is drawn in the same Japanese style as the manga and is very well done, and its detail and elegance are used to great effect to emphasize some of the more tense situations in the game. The low graphics style also works really well for upping the creepy factor, since it forces the game to rely more on actual descriptions of gruesome scenes and events that, at least in my case, sent my imagination into overdrive, thereby creating a much worse scene than any that could have been presented visually. Oh, and fair warning, the descriptions are graphic. I’m pretty used to explicit stuff, but even I found myself recoiling in revulsion at some parts of the story and wanting to put the PSP down. This game is definitely NOT for the squeamish, but I found the descriptions really did heighten the terror of the game and, in the end, really helped produce a great horror experience.

Additionally, the music in this game is amazing. There are a lot of the typical orchestra hits and background creaks that one expects from a survival horror game, but the action and exploration sequences are filled with these fantastic chiptune/techno and orchestral pieces that you can just listen to for hours (and in fact, I have). For me, the sound was reminiscent of my favorite Castlevania tracks, and managed to do everything from setting the mood to getting me involved in the game to sending my heart racing. Even when I needed a break from the game, I found that I wanted to keep playing just so I could listen to its music. 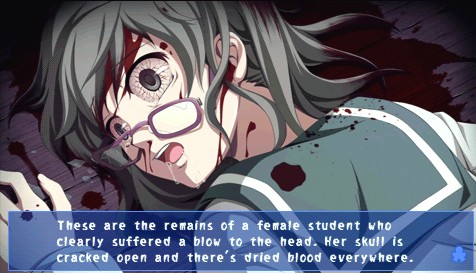 I’ve never read the manga version of Corpse Party, so I did not go into the game with any advance knowledge of the plot, and I have to say I’m glad of it. The game’s story has a number of twists and turns that kept me interested all the way through.  In fact, I really have to praise the writers of the story for not letting it become too predictable, have too many crazy plot twists, or fall into any really glaring plotholes, because as a fan of horror I know that these are weaknesses the genre is prone to. The game keeps players on edge by having death lurk around any corner, and even when you think you have a handle on which areas are safe, the game can still catch you off your guard. Each chapter has one right ending that will allow the player to advance and a number of wrong endings that result in the death of one or more of the main characters. Sometimes it’s hard to tell if you’ve done something wrong until it’s too late, so to help the player along there are a number of save slots for each chapter, allowing you to go back and try multiple paths. Additionally, these extra endings open up additional smaller chapters you can play through for background information on the characters, which I felt was a really nice touch.

While Corpse Party tries to enhance its story-telling and replay value with multiple endings, it falls short in a major way by lacking any way to skip scenes and text. This makes replaying areas a real chore, as players will be forced to button mash their way through scenes they’ve already viewed in hopes of getting to something new. Case in point, I botched one chapter by missing one small detail and had to start over since all of my saves were from after my screw-up. Even though I knew exactly where to go and what to do, it still took me roughly the same amount of time—two freaking hours, by the way—to get there, due to the fact that I could not skip any of the scenes I had already watched. Additionally, speeding through the text is dangerous in and of itself, since players are occasionally presented with choices during dialogue that can affect the game, and accidentally selecting the wrong answer can make you have to revert to your last save. 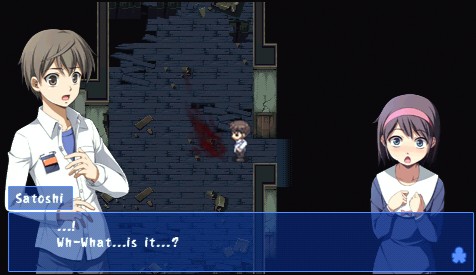 Even though the lack of a skip-text function is pretty annoying, it’s honestly the only fault I can find with Corpse Party. The game has a great visual style, amazing music, a twisted plot, and, most importantly, a mood that is creepy as hell. Horror fans out there should definitely check it out, though it might prove a little too intense for others (i.e. Vangie is really interested by the game, but knows she probably couldn’t deal with all the explicit stuff). For $19.99 the game is a pretty good deal, especially when compared to its pricier, more-visibly-impressive-but-less-scary modern brethren. Now, if you’ll excuse me, I’m going to go watch something happy to try and get all those horrific images of ghost children out of my head.

Nothing in this world matters more than you watching this video.