Halloween is a sacred tradition here in America. Once a Pagan holiday, it was demonized by my people, the Christians, as it was evil and corrupt, who then decided to make it their own for some reason, then made it a day to remember the immortal saints, despite it being roughly the exact same sinful worship of other figures who weren’t Jesus, and used it to burn really fuckin’ ugly cat ladies who smelled like rotting chamber pots in England, then brought it distilled over the pond from Matthew Jonas’ incestuous ancestors where we carved pumpkins instead of turnips, lit candles instead of protestants, and jacked off to the immortal grace of Edward instead of Count Dracula which, in turn, because of poor aim, gave birth to Castlevania: The Adventure ReBirth.

Apparently for the second time. 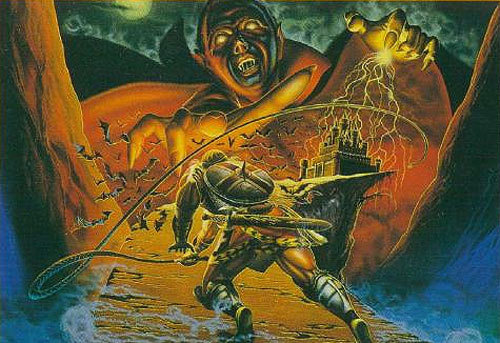 As you can see, early ancestors of the Belmont clan were actually turtles, charging headfirst from the
waters into coastal vampires the size and width of a hurricane. This would explain why they all move slow
and have slightly less jumping maneuverability than an airborne tank.

Still reading? Wow. Anyway, I was given permission from head poncho Paul Franzen to review this game as neither of us had really heard of it. I found it by accident as I was researching a complicated sexual position for recreational use on Wikipedia and discovered the third keyword in the search engine for “Rebirth” was a Castlevania game for WiiWare I didn’t even know about. After losing my wood (and several lunches) clicking on the first two, I decided not to kill myself for what I just saw by venturing into this Castlevania game.

Despite the rather misleading title, this game is NOT a real remake of the Game Boy classic. It’s more like a third title for the super ancient offshoot or a cross-section of the first title and Castlevania: Rondo of Blood. It’s a brand-new traditional platformer Castlevania and it’s witch-burning, turnip-carving, off-jacking AWESOME. 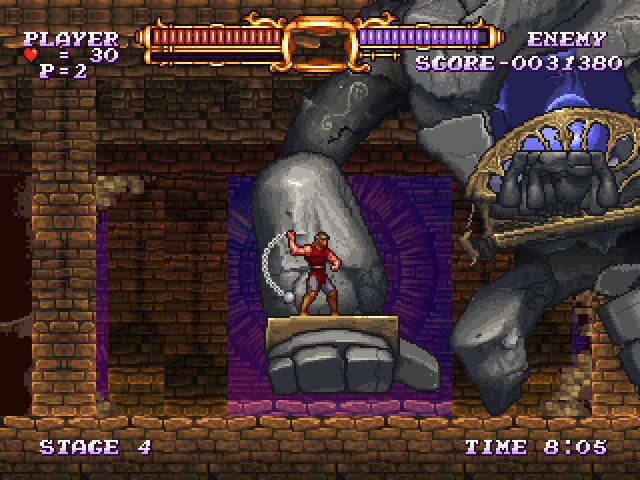 Speaking of golems, look who decided to come back to wreck havoc on us gentiles.
Oy vey, if Mowwis Toitledove vas alive today to see dis, he’d be DEAD by now!

Seriously, why haven’t they still been doing titles like these? I’d buy them. I bought this one and I’m glad I did. They did not lose their touch in the 15+ years it’s been since they did one that wasn’t Metroidvania. And even better? They did it RIGHT. It’s classic platforming gameplay with a lot of creativity. There are a LOT of tricks and traps in this one and it totally rivals Rondo of Blood with challenge and unexpected moments. The best part? Lots and LOTS of level branching. No alternative levels, sadly, but some levels have upwards of three or more different routes to take with new enemies and weird shit to contend with. As Christopher Belmont, who now has more original games he starred in then fuckin’ SIMON Belmont, your special power is a flame-throwing whip when you upgrade your whip twice, and it definitely comes in handy in this game. It starts out reasonable enough, but like many Castlevanias, the enemies start doing more damage progressively until you get four hits and then you have to fight this guy…and then THIS guy.

Yeah, he has three forms this time, and his balls are inverted.

His fireballs I mean.

That was quite a stretch, I agree.

No, I couldn’t write this article without it.

Well, if you know so much, why aren’t you writing for GameCola?

That’s what I thought.

But like your face, the graphics could’ve used some work back in the prototype phase. Something about the general design of the new sprites with their animations, special effects, or the fact that for some reason they reused a lot of Rondo of Blood sprites like they did for countless other Castlevania platformers against these new ones, just really doesn’t gel together. The soundtrack is pretty good, and even reuses some great obscure tracks from lesser known installments, but for some reason they’re done up in an overdone FM-synth/Genesis style that lacks something (but not cheese, oh no; like a ghost town in Wisconsin, it’s pretty well stocked in ’80s cheese) and all the sound effects are ripped from The Flintstones.

Heh, you know what would be awesome? If Fred Flinstone starred in this game. Certainly controls like I’m jumping a fat neanderthal through a clock tower gear maze sometimes. 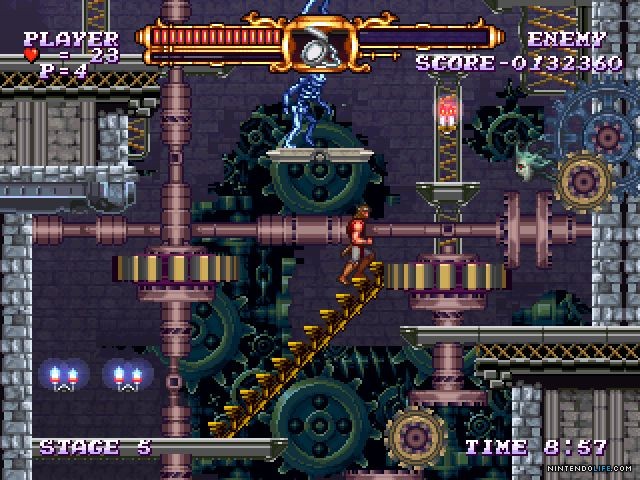 All right, I’ve kept it to myself too long. Does ANYONE know why Dracula has a clock tower?
Honest to God, what the fuck does he need it for? He doesn’t care what time it is. If anyone were to come up
and ask him what time it was, his answer would only be “…time to DIE!” and you’d be dead.
You don’t need to build multiple towers of gears for that.

But this game is awesome enough. If the Great Pumpkin were real, and because I’m theistic agnostic and aspie, I can prove he technically could be, this would be the present he left for you this year if you had the most sincere pumpkin patch.

Well, no one grows pumpkins for fun anymore, but everyone has a Wii, and this game is basically $5 on the Wii. Pick it up. Pick it up HARD.