This classic GameCola article was originally posted in May, 2007.

Since its GBA inception, nothing has delivered ridiculous, ADHD-friendly fun quite like the WarioWare series. The newest WarioWare title, Smooth Moves, takes the erratic gameplay back to your TV for the first time since the GameCube version was released three years ago. Previous versions have never been afraid to look stupid themselves, asking players slice logs, pick noses, and slather french fries with ketchup within the span of ten seconds, but Smooth Moves adds something new to the mix—now you get to look stupid, too! 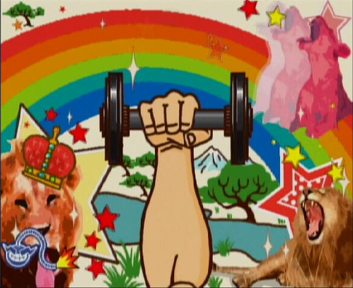 The Wiimote’s motion sensitivity adds a new dimension of silliness to the title. You’re instructed to hold the Wiimote in a specific “stance” before playing each microgame. For example, if you are given the Mohawk stance (shown below), then you hold the Wiimote atop your head to play the upcoming microgame. There are quite a few stances, all of which are designed to be as fun as they are silly-looking. You may look foolish in front of your friends when you play this, but—trust me—it’s nowhere near as foolish as you’ll feel when you’re standing in your empty living room, all alone, doing squat thrusts with a plastic controller on your head and posing like a samurai, so let go of your inhibitions.

Fans of the series have reason to celebrate this installment. After smacking orange-thieving old men with a blackjack, lifting weights to the delight of a bunch of lions (above) or shoving the dentures back into the gaping maw of a toothless old granny, you’ll find that the games are just as WTF!?-inducing as they’ve always been. And, of course, it wouldn’t be a WarioWare game without plenty of nose-picking and the self-referential games of 9-Volt. 9-Volt still has plenty of retro Nintendo games to offer, as you’ll find yourself doing everything from playing with Nintendogs, reffing a Punch Out match, and even going over 100 years back in Nintendo’s history by sifting a deck of their playing cards out of a pile of sand.

Along with motion sensitivity, the game also integrates your Miis into the game (see below) so you can watch yourself go through a boot camp style obstacle course, shoot bananas at a giant alien nose, or arm wrestle your sister’s Mii.

Visuals are the same crappy-on-purpose MS Paint style they’ve always been with a few exceptions. It wouldn’t work for, say, Halo, but that visual style definitely works here. The eclectic mix of cheerleader cheers, remixed NES tunes, and J-pop music also works with this game where it would seem horribly out of place for most others. 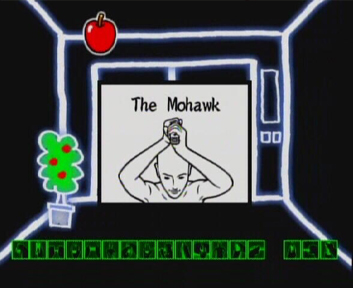 Though it is very fun, Smooth Moves isn’t without its problems. The Wiimote is generally very responsive and works great, but there are a few games where the motion sensing is inordinately picky and requires you to be holding the Wiimote at just the right height and distance away from your television for a game to read it. This isn’t a huge problem and only affects a handful of the games, but it’s still no treat.

The idea that we’re all supposed to share one Wiimote is so ridiculous that I thought there HAD to be a problem with my game, so I called Nintendo’s support line. The guy who answered had no idea why my second Wiimote wouldn’t connect to the system and, after about 10 minutes of trying to figure something out, the Nintendo rep informed me, stunned, that the multiplayer mode supports only one Wiimote and admitted that it was really stupid and counter-intuitive for it to be designed that way. I wholeheartedly agree. I searched around the Internet after this phone call and found that the multiplayer mode was designed to use only one Wiimote so that your friends can enjoy watching you flail around like an idiot. That certainly is a good point, but I would much prefer that you recommend that I use one Wiimote rather than forcing me to.

Another unfortunate thing is that this game, much like its predecessors, is pretty short. I cleared all the stages the first day I got it, but, thankfully, the game has a good amount of replay value with high scores, secret unlockables and, even if it is crippled by design, the multiplayer mode.

If you’re a fan of the WarioWare series, Smooth Moves is worth picking up. If you aren’t, the motion sensitivity makes it worth a rent anyway.

Michael Gray interviews one of the Nancy Drew voice actors!