Runaway 2: The Dream of the Turtle is every bit the aggravating, obnoxious, stupid, and occasionally frequently even racist videogame that the original Runaway was—and I love it for it.

Don’t get me wrong: This is a terrible game. The main character is an unlikable asshole and the puzzles don’t make any sense; at times, you’re required to do things like barter with people’s false legs, or cause a man to get sexually assaulted by a bear so you can then steal from him. But while I hated the original for all the awful things it made me do, I had a total blast with Runaway 2. For the exact same reason.

Why? It’s all about perspective. 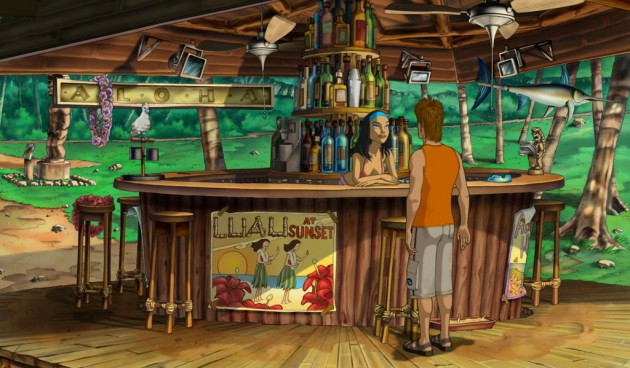 Don’t go into this game thinking you’re getting the next Curse of Monkey Island (even though it looks exactly like it, and other reviews describe it in those terms); you’re not. Sure, it’s a point-and-click adventure game, and sure, you solve puzzles by rubbing two items together and hoping for the best, but that’s about it. You’re getting a game about cheating on your girlfriend, and then later leaving her for dead while you go on vacation with a gross, racist Japanese stereotype (who amazingly gets even MORE screentime in this game than he did in the original, even though this game came out in 2007 and the developers should know better). You’re getting the Enchanted Arms of adventure games, is what I’m saying; almost everything about this game is totally stupid.

The puzzles have no range; they’re completely binary. Either they’re super easy and you figure them out right away, or they don’t make any goddamn sense. This isn’t your typical adventure game Moon Logic, where you might have to, say, create root beer by mixing “roots” with “beer”; it’s logic from Planet Hell. It’s like the people who designed these puzzles have never actually played an adventure game before—or they only played the wrong ones, and took the wrong lessons from them. “I know, let’s make the player walk back and forth between two people that are four screens apart like 18 times in a row! THAT WILL BE SO MUCH FUN!” “Oh wait, I got a good one: Let’s assume the player is an idiot, and only let them try the correct solution after they’ve already tried six specific wrong ones!” That last one actually describes like half the puzzles in the game—very frustrating, because then the challenge isn’t so much “figure out the answer to this clever puzzle” as it is “figure out what stupid shit you have to try before they’ll let you actually solve it.” 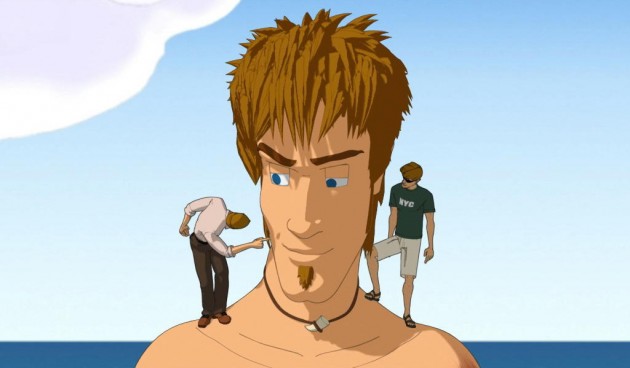 So why did I like the game? The story. The goddamn terrible story. The scene starts with our hero, Brian Basco—no longer the bumbling pocket-protector nerd from the last game, but now inexplicably a strapping young surfer dude—pushing his girlfriend out of an airplane door. And it only gets better from there, as Brian (all in the name of finding and saving his girlfriend WHO HE PUSHED OUT OF AN AIRPLANE DOOR) goes on to, in no particular order:

1) Dress up in blackface to pass as an African-American dude (yes, I’m completely serious),

2) Get a BJ from a girl who is definitely not his girlfriend—and then later persuade that same girl to give some other dude oral sex, just to buy you time,

3) Flirt with and hit on a fourteen-year-old girl (who was apparently a real-life contest winner who got to have her likeness added to the game), and

4) Perhaps most shameful of all, sic a drunk monkey on a young child so that you can steal his videogames.

Also, the game ends with (SPOILER ALERT) you discovering that your girlfriend has been abducted by aliens, after which (again, I’m totally serious) you and your friends throw a big party on a boat, without actually having saved your girlfriend. Now, you might recall a similar list I made up for my Runaway 1 review (actual sample item: Brian burns down a hospital), although then, I was using it to explain why the game was terrible. Now I’m using it to explain why the game is awesome. Why the sudden change? Because I have no sense of consistency whatsoever.

Wait, no, that’s not right; it’s due—as I alluded to earlier—to my perspective. Having played the original Runaway, expecting it to be an actual good game, I was ultimately disappointed that the main character turned out to essentially be evil incarnate, presented as a hero; now, I know better than to expect anything more from Pendulo Studios. Now instead of getting pissed about every stupid thing that happens in the game, I’m laughing at it. At the main character. At the game. At them. Definitely not with them. I’m not taking it seriously anymore, and that completely changed the experience from painful to hilarious. It’s classic “so bad it’s good.” 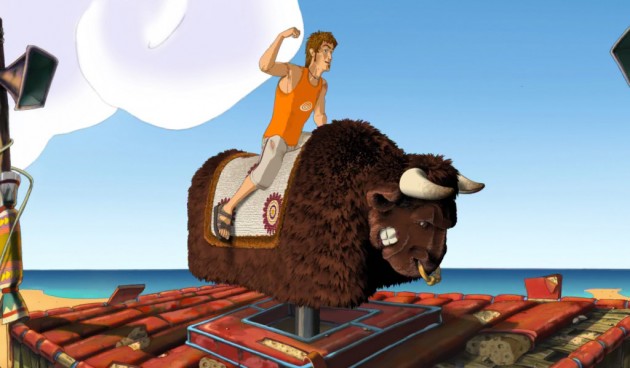 Of course, there are plenty of parts of Runaway 2 that are just “so bad it’s bad.” The puzzles, for one; for two, the idle animations. The characters in this game all have idle animations (and sometimes even idle audio) they perform while you’re not interacting with them. Which is cool, except that if you try to interact with them while they’re doing this, the game grinds to a halt until the animation is complete—which can sometimes take up to a full minute. So you’re just standing there, unable to do anything, at all, while a side character finishes muttering to himself about sandwiches or whatever. You don’t even have a cursor anymore; it’s maddening.

But there are actually some parts that are legit-good, too. The interface is clean, and all the interactions are mapped to one cursor; you won’t get penalized for clicking “use” when you were supposed to click “push” or “move” or “lick.” The hotspot text is funny, too; it doesn’t just say, for example “use throne”; your only option is to “desecrate shrine” (and of course Brian is happy to oblige). And the game even plays with Brian’s character a bit. Sure, he spends most of the time entering people’s homes, examining their belongings and saying “Hey, I bet I could use that!” before remorselessly snatching it—but sometimes he gets in trouble for it. You’ll go to steal something from right under someone’s nose, Brian’ll say “Yeah, I think I’ll take that!”, and the dude will just look at him and say, “No. You won’t.” And then Brian stares at him with the most incredulous, sheep-faced look, like the concept that people don’t want him to steal from them doesn’t make any sense. It’s cute. (Also I like to think of it as an acknowledgement on the part of the developer that Brian Basco is a psychopath.) 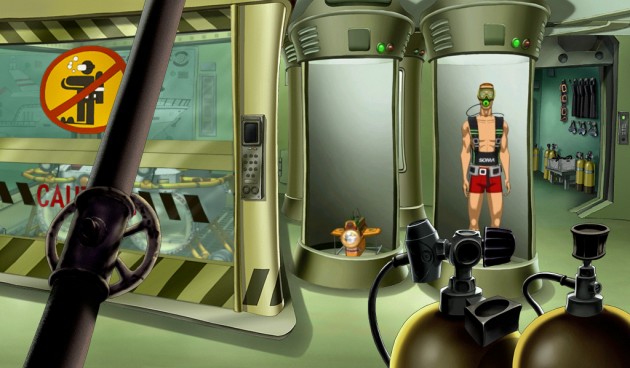 In all, Runaway 2 is an interesting case study re: the importance of the player’s mood on the perceived enjoyability of a videogame. The fact that something as simple as the player’s personal mindset or perspective going into a game can have such a meaningful impact on their experience is telling.

Telling about what? I have no idea. This is a videogame comedy website, not a videogame philosophy website. Farts.

OK, look. I love the idea of courtroom brawling with an actual medieval knight as much as anyone, but I'll be honest—the game's generic visual style is gonna take some getting used to. What's the id ...