The Shawnee Art Show displayed the best of what my school’s creative talent has to offer.  There were paintings, sculptures, photographs, children’s books, masks, dishes — several of which (among the best there, of course) were created by members of the GameCola staff.  But one (non-GameCola) item in particular stood out from the rest.  One item always had a crowd surrounding it.  One item was something that had never before been seen at Shawnee’s Art Show.  That one item was created by a senior at Shawnee High School, and it was a yet-unnamed fantastic two-player side-scrolling computer game.

To say that this computer game was a “hit” at the Art Show would be like describing Super Mario Bros. 3 merely as a “hit” for the Nintendo Entertainment System.  Nary a moment went by when two people were not blasting and slashing their way through this demo version of what could easily be mistaken for a GameBoy Advance title.  The game’s creator, Jim Bochanski, was constantly having to run back and forth between the computer table and the rest of his artwork to present his game to yet another group of eager students.

According to Bochanski, the game was inspired by the live-action role-playing (LARPing) that took place in his basement between he and a friend.  After telling us this, Bochanski giggled, proclaimed “I am  huge dork!”, and said nothing more of this “LARPing”.

Bochanski told GameCola that he had always wanted a two-player MegaMan type game; he wanted somebody to have his back.  Instead of bitching and moaning (well, at least not for too long), he decided to create his own, and eight months later his idea was in playable form.  He worked on the game five days a week, for about five to six hours a day.  Considering that Bochanski is a high school student with not a lot of time on his hands, this is a significant amount of time to spend working on anything, not just a game.  And, woo boy, does the work ever show!

The animations alone, which Bochanski created without any outside help, are enough to make your eyes bug several inches from their sockets.  Unfortunately, there’s no way I can actually “show” you how incredible and detailed Bochanski’s animations are, so you’ll just have to trust me on that.  The most impressive animation, a background scene in which rocks are being melted down, is more breath taking than most things I’ve seen on Super Nintendo games.  That part alone took Bochanski about ten hours to animate, but again, the amount of work he put in is quite evident.

But awesome visuals are nothing without solid gameplay to back them up, and here again Bochanski’s program shines.  The game features two characters, both obviously inspired by MegaMan.  Except that, unlike MegaMan, these two characters are not limited to just shooting their adversaries — they also have swords for close range combat.  At the moment, one of these characters has an unlimited supply of ammunition, but Bochanski assures us that this will change.

Typically, playing a two-player computer game with just one keyboard is the equivalent of using the Track and Field mat to play Mike Tyson’s Punch-Out!!, but Bochanski jumps clear over this hurdle with his effective control scheme.  It’s really simple, actually:  One player uses buttons on the right side of the keyboard, and the other player uses buttons on the left.  They keys are spaced well enough that both players can see the monitor without being on top of each other, something that corporate computer game developers can’t seem to figure out.

The more cynical among you may think of Bochanski’s game as nothing more than  a MegaMan clone with swords, but you’re just being spiteful if that’s your line of thinking.  I’d like to see you make something half this awesome, punk!  In a world where 3D polygons are the standard for video games, and anything less is considered outdated and thus no good, it’s refreshing to see an old-fashioned side-scroller that’s two-player and actually a lot of fun to play.  Unfortunately, due to the amount of time and effort that Bochanski has had to put into his quality title, a finished project may never see the light of day.  Unfortunately as well, I am unable to provide much more than some screenshots, concept art (see: end of article), and my opinion of the game.  But if that is enough to get you interested (or you too have played and love his Art Show demo), please send an e-mail his way and let him know.  Maybe if we show enough support for Bochanski’s game, he will continue to work diligently on it, and some day his awesome side-scroller will be available at a video game retailer near you. 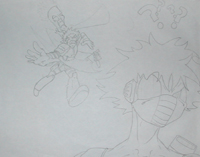