Edna & Harvey: The Breakout has a pretty good premise. Our heroine, Edna, is being held captive in an insane asylum. She isn’t crazy at all; she’s been locked up by a criminal psychiatrist, who is covering his tracks. For a brief moment between drug treatments, Edna regains full control of herself. Now she has to escape from the asylum and prove the psychiatrist is a criminal.

Fortunately, Edna isn’t alone. Her good friend Harvey is there to help her. Harvey is Edna’s talking stuffed animal.

…On second thought, maybe she is crazy. 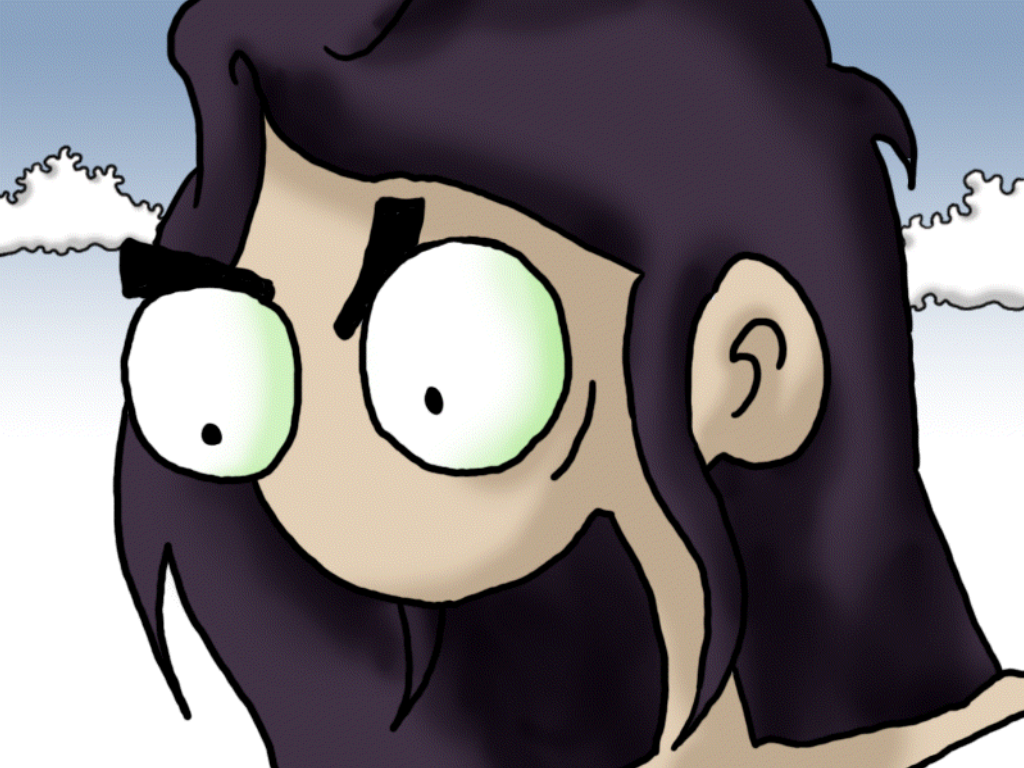 Edna is the main character, and her portrayal is inconsistent. Sometimes, she seems like a normal, likable protagonist, and I really wanted to help save her. Other times, she seems like a deranged lunatic, and I wanted to get as far away from her as possible. She switches back and forth between sane and insane at the drop of a hat, which kind of ruined my motivation for helping her escape the insane asylum.

It doesn’t help that Edna looks rather scary. The graphics in general are kind of disturbing. Now, perhaps the game designers were trying to create a spooky atmosphere. More likely, they were just being cheap with the graphics. It didn’t surprise me to learn that this game started life as a project done by a German college student. The game has not quite graduated from its amateur roots.

Speaking of which, you can kind of tell that this game wasn’t originally written in English. 75% of the translation is fine, but the other fourth of the translation is…off. It’s not like there are obvious grammatical errors or anything like that, but the dialogue will just refuse to make sense at times. Maybe it’s because Edna is crazy, maybe she’s making references I don’t understand, or maybe there are more translation goofs than should be allowed. 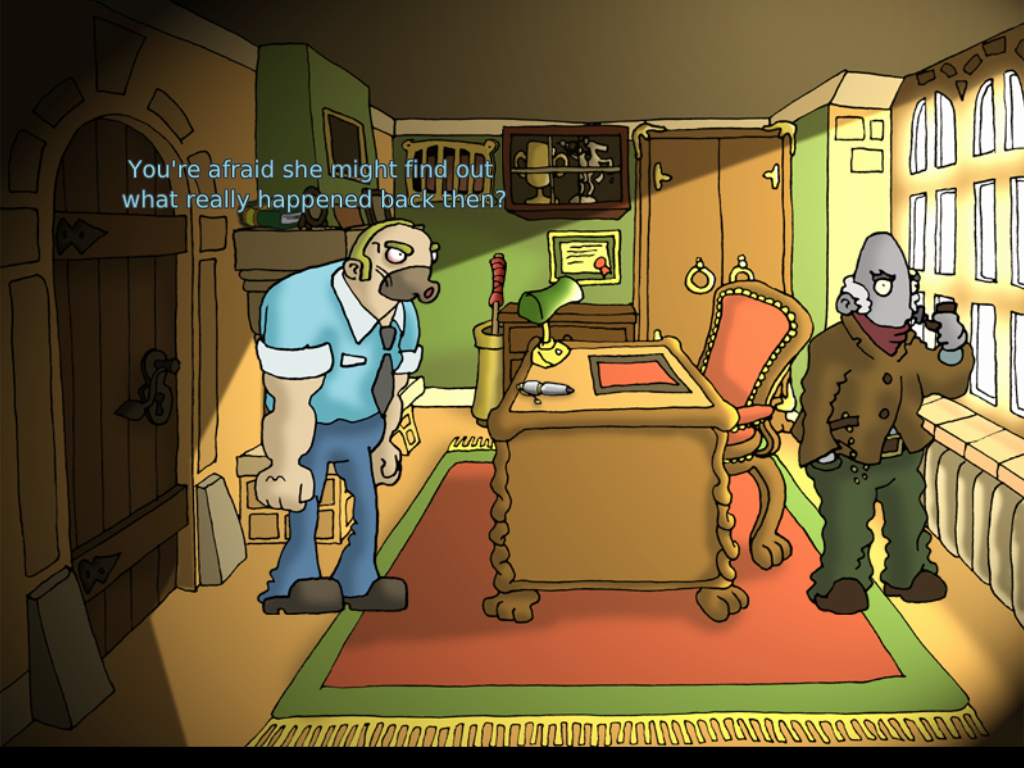 The voice acting for this game is probably the highlight. Edna’s voice actress does a great job, switching between sane Edna and insane Edna without any difficulty at all. In fact, her excellent delivery helps improve a lot of the lackluster jokes. She has hundreds of lines, and she doesn’t seem to trip up even once.

The other voices are all good, and I don’t have anything to say about them other than the fact that Harvey sounds like a manly Marge Simpson, and it frightens me.

All in all, Edna & Harvey: The Breakout is a passable game, which inconsistently wavers between “fine” and “ugh.” It could probably be improved with a better translation, but I can’t see it being that much more enjoyable unless it makes a drastic change, such as “don’t make Edna so darn creepy.” 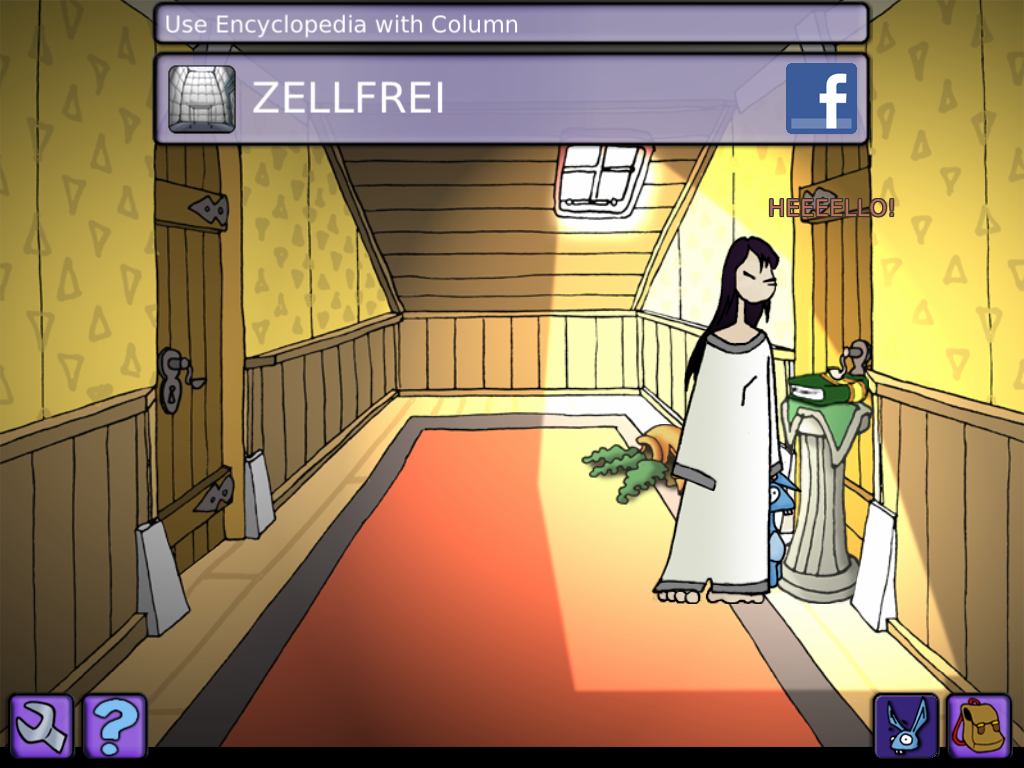 P.S. I played the newly-released iPad port of the game. It is a near-perfect port; the graphics quality has not been decreased from the PC version, and the touchscreen controls are great. The only, slight problem with this port is the fact that iPad achievements are still in German. They’re in English in the achievements center, but when you unlock them, they’re in German. See the picture above for an example.

I'm sure that many of you would think it odd if I were to tell you that Tomba! is easily one of the most creative games that I've ever played.  In fact, when I told people that I was reviewing Tomba!