Episode 7: Resolution is the last episode of the series. They’ve been building up to this final case for a while, with enough foreshadowing to convince you that this case will be something special. And according to The Merriam-Webster and Garfield Dictionary, it’s true!

Special (adj.): The shortest case of the series, featuring an ending where the culprit is caught because the main witness conveniently recovers from a 13-year-old case of amnesia.

I’m not saying this is a bad episode. Well, OK, I’m totally saying this is a bad episode, but I’m exaggerating for the sake of emphasis. This episode is just as good as the others, and if it was an episode in the middle of the series, I wouldn’t take much issue with it. But it’s not a mid-series episode. It’s the series finale. It needed to have something special, not just “same old, same old.”

Your honor, to prove my statement, I would like to introduce Exhibit A: transcripts from Episodes 1-6. Note how every single one of them contains build-up for the unsolved Preppy Jogger case. Hence, I conclude that this long-awaited case should be worth all the anticipation. 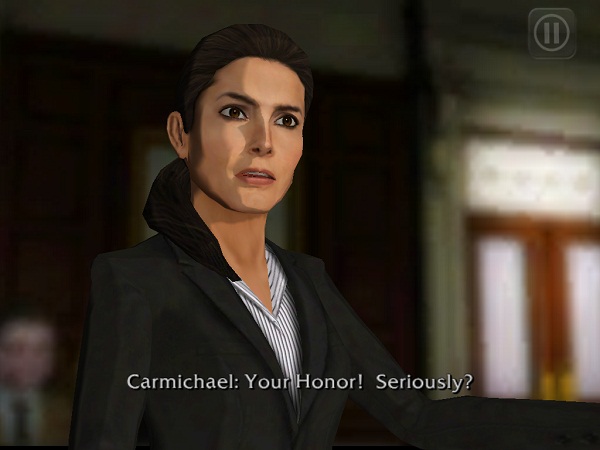 So, what went wrong here?

The first problem is with the characters. The characters have been a strong point of the series, and it’s no secret that I liked seeing the detective/lawyer teams work together to solve cases. It’s interesting to see a pair of detectives become friends, or to see them compete with each other, or both. Even during the least-interesting character moments, when two partners kind of ignored each other and only focused on the case, it was still amusing to see the two of them go back-and-forth with snappy dialogue.

Well, none of that here. Rey Curtis pretty much flies solo on this case. His partner, Olivia Benson, is only present for one-third of the investigation, and I think that hurts the game overall. No offense to Rey, but he can’t carry the entire case on his own. Things just aren’t as interesting, with only one detective around. Why did he leave his partner behind?

Olivia Benson isn’t the only character who gets the short end of the stick here. Most of the other lead characters of the series are either completely absent, or demoted to appearing in only one scene. It’s not a game-killer by any means, but it’s just sort of disappointing. I was hoping for a grand final case where all the characters get their own chance to shine.

The second problem with the game that I would point out is this: 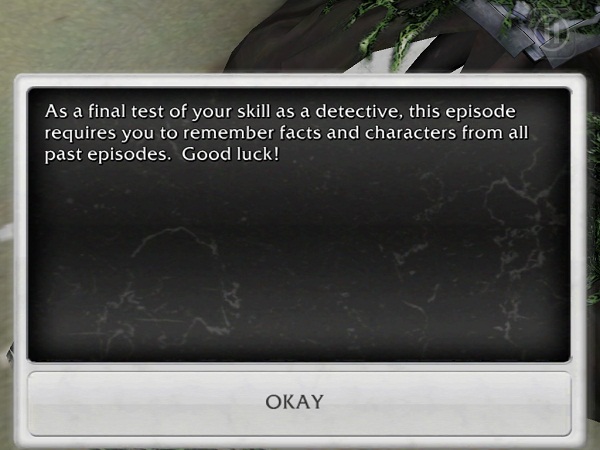 This happens at the start of the episode. Call me crazy, but I got a little excited and a little nervous when I saw that screen. I was nervous, because I’d have to remember characters I hadn’t seen in weeks. But I was excited, because it meant that all the cases were connected, and they would come together to form a grand finale.

You don’t have to remember characters and events from all the episodes. You only have to remember Episode 1 and Episode 6. So…the seven-episode Law & Order Legacies is really more like a loose trilogy. Episodes 2-5 are irrelevant to the overall storyline about the Preppy Joggers.

Does it hurt the game, or the series in general? No. Trilogies are fine, and the other cases were fun even if they were irrelevant to the overall plot. But by saying all the cases were relevant, the game deliberately tricked me into thinking this case would be better than it was. 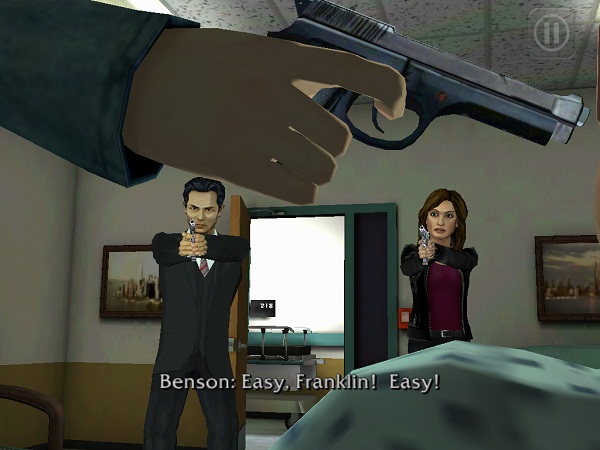 The standoff was the best part of the episode, although the fact that you couldn’t lose made it less challenging.

The third problem I’ll mention before I stop complaining is inconsistent editing. In Episode 6, they called this “the Preppie Jogger case.” Now in Episode 7, it’s “the Preppy Joggers case.” Gaugh! Why did they change the spelling and the count? Did they not decide what actually happened in the shooting until just now?

…That’s what happened, isn’t it. That’s why there were no solid details on the case until this episode. That wasn’t foreshadowing, mixed with “you’re going to love this case.” That was foreshadowing mixed with “we’ll make it all up later!”. Grrrr.

OK. Onto the actual episode. Episode 7 starts at an Occupy Wall Street protest, where super-billionaire Giles Bedford is pushed off the Brooklyn Bridge. When the body is recovered, it turns out to be a mannequin dressed like Giles, and not really Giles Bedford himself. The mannequin is holding a note which says something along the lines of, “Dude, Giles Bedford is totally the killer in the Preppy Joggers case, dude.”

Rey Curtis is a super-genius detective, so when he reads the anonymous note, he decides that Giles Bedford is now the lead suspect. Apparently, this insight did not occur to him 13 years earlier, when the actual murder occurred. As the episode later reveals, the Joggers decided to take a jog on Giles’ suggestion, and they were taken to the site of the killing in Giles’ car. But I guess Rey did not think to connect Giles to the murder at the time. 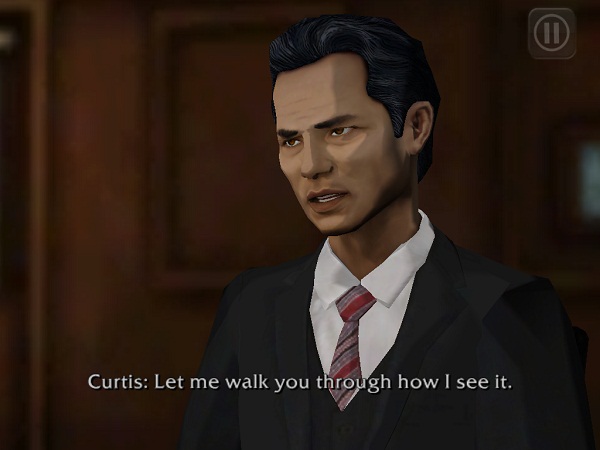 Giles’ long-lost son (from Episode 6) makes an appearance, in order to fulfill his role as red herring suspect. Mickey Trevino (from Episode 1) also makes an appearance, and even though he wasn’t involved in the murder, he knows more about it than the detectives do. All the pieces fall into place perfectly, including a magical piece of evidence that nobody thought to mention until the trial, and the only eyewitness’ well-timed recovery from amnesia.

I dunno. They way they solved this case all seemed a bit too convenient for me. If solving the case was that easy, why didn’t they solve it thirteen years ago? Sure, the eyewitness still had amnesia then, but based on the evidence, they should have been able to figure it out. The fact that Giles Bedford’s regular chauffer was replaced by a known hit man on the day of the murder should have been something of a tip-off that Giles was involved.

All in all, Episode 7 is a good enough case, even though its solution is far too easy. The main thing I fault this case for is the fact that it does not live up to the expectations that it, and the other games in the series, set up for the series finale. I was expecting a complex, long case; I got a short, rather easy case. It’s like getting a pretzel for dinner, when you were expecting steak. Sure, pretzels are good, but it’s not the same as steak. 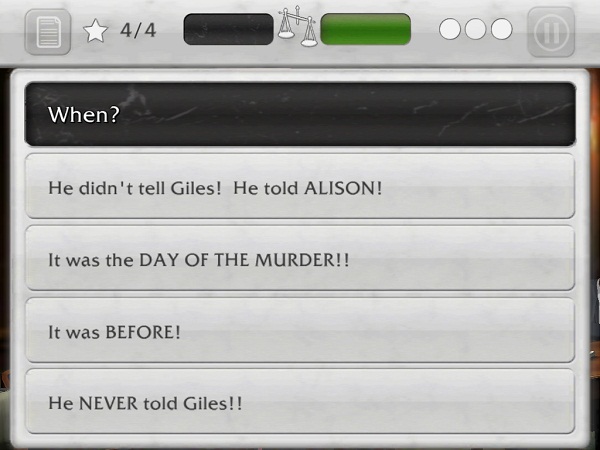 This case would have been 20% cooler if they HAD MORE ALL-CAPS DRAMA!!

So much for Episode 7: Slightly Disappointing Finale. What do I think of the Law & Order Legacies series overall?

Well, it’s been good. It’s been surprisingly fun, considering the fact that 80% of the gameplay is made up of going through dialogue trees. And now I’m a semi-fan of Law & Order; I actually decided to watch an episode of the show, thanks to this series. In the first minute of the show, I was excited because I recognized characters from the game; in the second minute, they went into detail about a disgusting crime which made me feel sick, so I shut the program off immediately.

It’s been an interesting experiment to see Telltale make an iPad-centric series. It certainly kept me entertained, and if they made a Season 2 of Law & Order Legacies, I wouldn’t complain. Well, OK, I would probably complain about it a lot, but that’s just my way of saying it’s a great series.

Our ratings are delving into the nether realm as we dissect the hidden gem Disgaea 5: Alliance of Vengeance.