Choose your own adventure in this RPG-esque epic that lets the readers impact the story.

Last time in “The Gates of Life,” our heroes—Captain Render, Rivers Fusion, Barbarian-Mage Enrique, Jonathan the Minotaur, and Clyde—landed in Render’s home city of Trelenodora so that Render could assassinate his former mentor, Captain Rothbury, as revenge for framing the now disgraced adventurer for murder. The gang finds Rothbury entertaining Render’s father, and while this discovery doesn’t halt Render’s attack in the slightest, another familiar face does. Enrique’s former devotee—a little animated spoon by the name of Spoonlad—is Rothbury’s new apprentice, but the sight of his once-beloved sends him into fits of self-doubt and effusive proclamations of love.

In the midst of this drama, Rothbury escapes to the docks. Back at the airship—and unaware of Rothbury’s true identity—Jonathan and Clyde agree to take the captain on as a passenger to earn some petty cash. This leaves our heroes stranded in Trelenodora, and Render grounded for life.

Thomas Render V: Well, son, it seems you’ll be staying for a while. Your mother will be thrilled. She’s kept your bedroom just the way you left it. I’ll see to getting you a job in the family business and setting you up with an allowance.
Render: But I don’t want to–
Thomas Render V: Then we’re going to sit down and have a serious discussion about your obligations to the family and how you’re going to make your mother proud and marry a nice girl of our choosing. I know for a fact that the Mortisses’s daughter Mildred is still available.
Render: Rivers! Enrique! New plan! Forget revenge—we’ve got to escape my parents!

Render, Thomas, and several of the family’s personal bodyguards head down a busy office hallway, Thomas nodding to obsequious clerks as they walk. He’s been catching Render up on the family business, and promising that he will look for another eligible bachelorette after the previous evening’s dinner debacle. Render is still put out that his three attempts at escape were foiled, although he is slightly mollified that he will not be forced to marry Mildred Mortisses.

Thomas Render V: Ah son, so good to have you finally come to your senses. I can hardly call this the “family business” when no one who works for me is actually family.
Render: If you can call being kidnapped and dragged around like a common criminal coming to my senses.
Thomas Render V: Not my fault you tried giving us the slip again. I can’t have you running off with those hooligans; your mother would have another fit. She’s having a hard enough time convincing her friends that you’re really back.
Render: And you need an armed escort to keep me in lockdown?
Thomas Render V: I like to think of them as protecting the family’s assets. Give me an heir and you’re free as a bird.
Render: What’s wrong with the grandchildren you already have?
Thomas Render V: None of them have half the pluck you had at their age. Don’t bother about that now, though. Come along, your office is this way.
Render: My office? 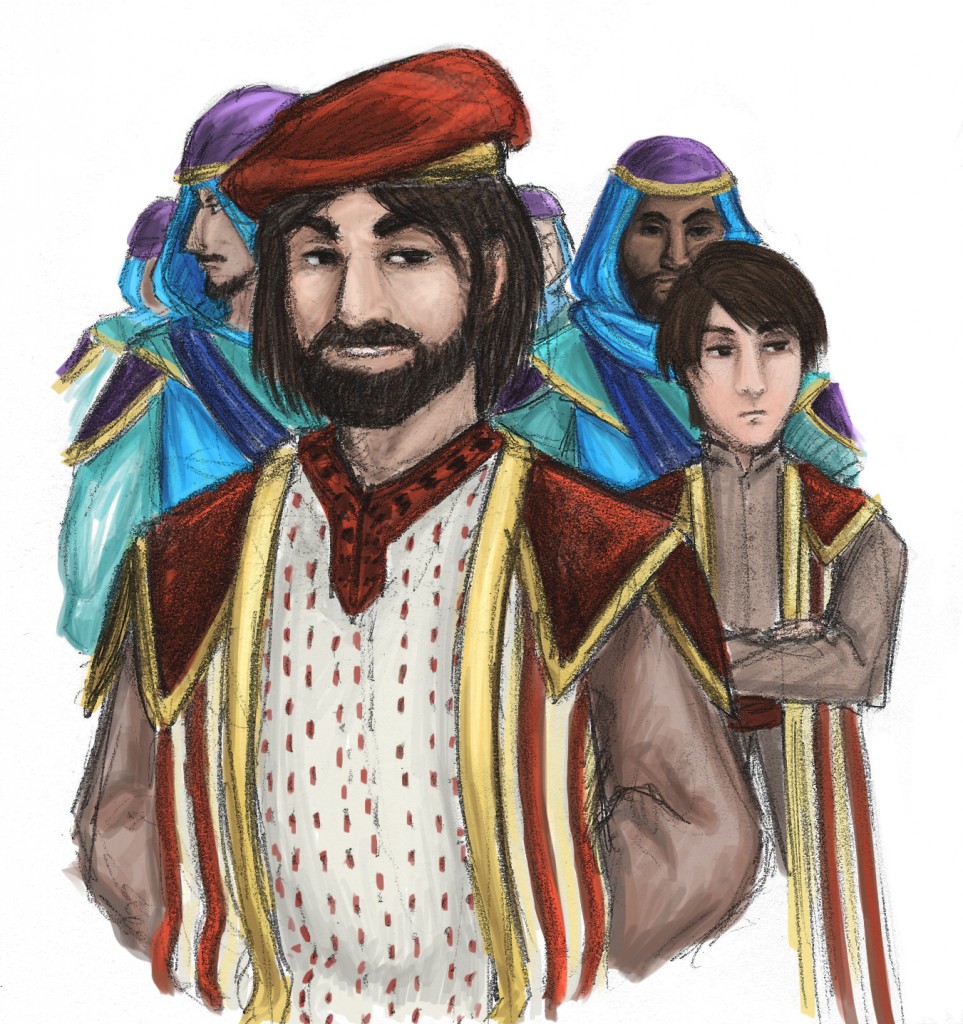 Thomas leads Render and their escort to the harbormaster’s room. It’s a large room with an expansive view of the harbor, and Render can see ships coming and going. In the middle of the room is a large desk, complete with posh chair.

Render: Wait…you don’t mean…?
Thomas Render V: That’s right, my boy. From this point on, you’ll be the one making the decisions. Of course, it isn’t all fun and games—can’t have you thinking that we’re rewarding you for your remarkably poor decisions these past years—but I think you’ll find the line of work to your liking.

Render sits down in the chair, eyeing his father and the two guards. He rummages through the desk drawers, gets up, and looks through the books in the room, unable to keep still. Thomas gives his son an indulgent smile as the boy takes in his new prison for the foreseeable future.

Thomas Render V: You’ll find the work easy enough, I think. Going through the ships’ manifests to look for potential smugglers, illegal goods, dangerous devices, that sort of thing. Once you’ve come up with a list, we seize and hold the cargo for the royal guard. We get a share in the profit from these goods, and you, in turn, will receive a small percentage for your troubles.
Render: What if they end up being legitimate?
Thomas Render V: My boy, this is Trelenodora. Everyone is smuggling something. You just need to be smart enough to find out what it is.
Render: So basically I’m a bureaucratic pirate?
Thomas Render V: I knew you’d like the job. 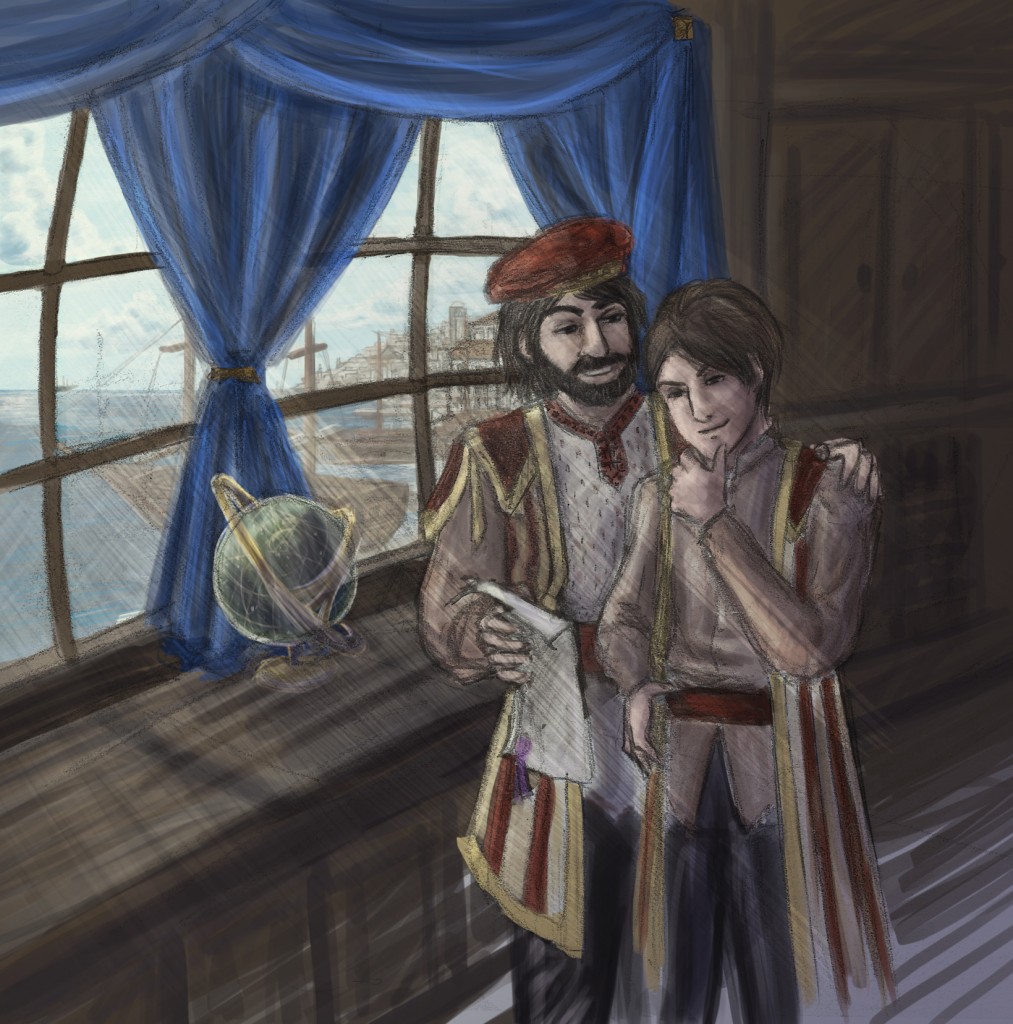 Enrique and Rivers sit in a local tavern, plotting a way to free Render. Spoonlad is also with him, but his efforts are focused on wooing Enrique.

Enrique: We’ve got to find a way into that house, and fast. And preferably in a manner that allows me to hit a few people.
Rivers: Well, we’ve checked the perimeter thoroughly enough to know that it’s locked down tight. The airship is still MIA, or we could sweep in with an aerial assault. Render is gone, so our limited understanding of how the city works is gone, too. Time is running out. So’s money.
Spoonlad: Ah, my beloved Enrique!! Do not give up!! Surely you shall think of something ingenious and gallant. If anyone can figure out something in this bloodthirsty den of murder and intrigue, it’s you!
Enrique: Wait a minute. Spoonlad, you’ve lived here. You know how these people think. I hate to say this, but we might actually need your help.
Spoonlad: Ah, my beloved Enrique-kun!! I knew you would realize that you needed me!! I swear to be ever-faithful, ever-loving, ever in your pants—
Enrique: Don’t make me regret asking you for help. Now, what can you tell us about the city guard?

Rivers looks glumly around the room as Spoonlad starts to talk, and that’s when he sees the announcement board in the corner of the crowded room. He gets up to investigate, and comes back a few minutes later with a flyer in hand. 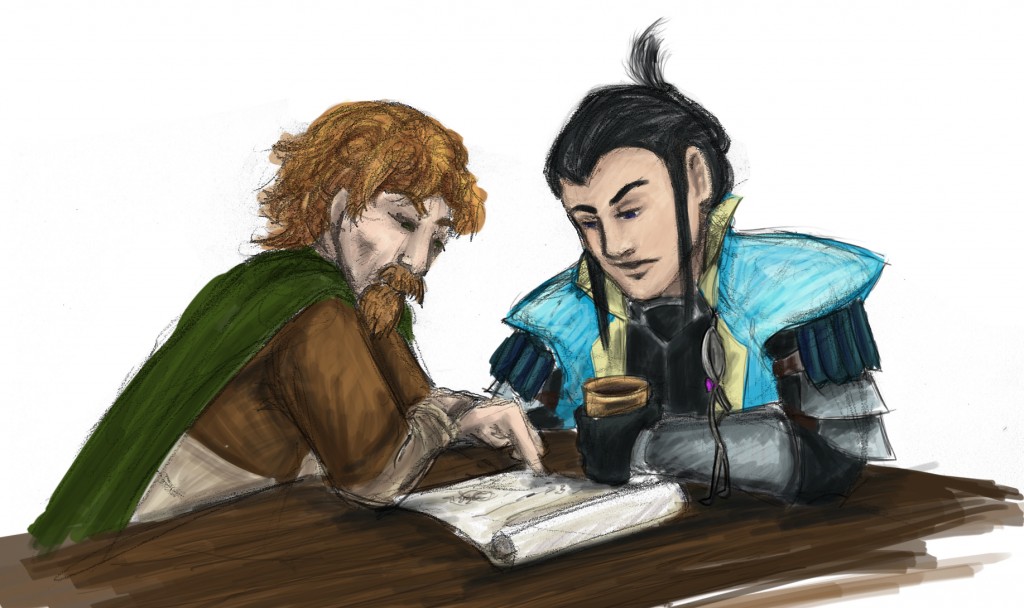 Rivers: Gentlemen, I think I found our opening.
Spoonlad: Hmmm… “Ser Thomas Render VI is pleased to announce the return of his wayward son and heir, Thomas Render VII. The Render family invites friends and family to a gala in his honor, happening next weekend on the family estate.”
Enrique: The event is invitation-only, but it’s a start. How do you suppose we crash the party?
Rivers: We’ve got a little over a week to plan. I only hope that Render can hold out til then.

And so ends this exciting edition of GameCola’s “The Gates of Life.” Can Render’s new seat of power sway him from trying to escape? Will Spoonlad find an opportunity to woo Enrique? Where the heck are Jonathan and Clyde? Only you can decide, so vote now below!

Won’t Go Down with This Ship

Render takes to his new job like a fish to sushi. However, being in charge of the harbor has its perks, namely: choosing his getaway ship.

Render: Hmm, this ship seems suspiciously suspicious. I want to check this one out personally.
Valet: Sir, I don’t think that’s wise. Your father left explicit instructions–
Render: To stop the rampant smuggling going on in our fair city’s ports! Come, man, to the docks! Chop chop!

Spoonlad volunteers to be the inside man, instigating himself in the good cutlery stash that will be used at the Render Family Gala.

Spoonlad: Oh, Enrique-kun, will not this valiant act of bravery sway you to my charms??
Enrique: Most definitely not.
Spoonlad: Oh, you’ve always been coy, my love! It’s one of your many manly charms.
Rivers: Spoonlad, you might want to stop while Enrique is still being civil.

After delivering their first passenger to an undisclosed location, Clyde and Jonathan head back to pick up the rest of the gang. Unfortunately, there’s now a bounty on their ship.

Jonathan: Render’s father put a bounty on our ship! We’re wanted men!
Clyde: The man certainly knows how t’ make one feel wanted.
Jonathan: We can’t just leave them to rot in the city! Can’t you create something to get us in there, under the radar?
Clyde: Hmmm… Give me some time to think it over.