I’ve never been big on rail shooters, despite owning a few. I had Super R-Type for SNES and R-Type 3 for Game Boy, but I didn’t really like them a whole lot. It was frustrating for me to die and then have to go back very far, just advancing in little baby steps and taking forever to get anywhere. But here comes Gyruss. Rather than being stuck in some unnamed space hell-hole, you’re out to save our very own solar system from utter destruction in the year 25xx. Get to it, Mr. Last-Hope-of-Earth Guy! 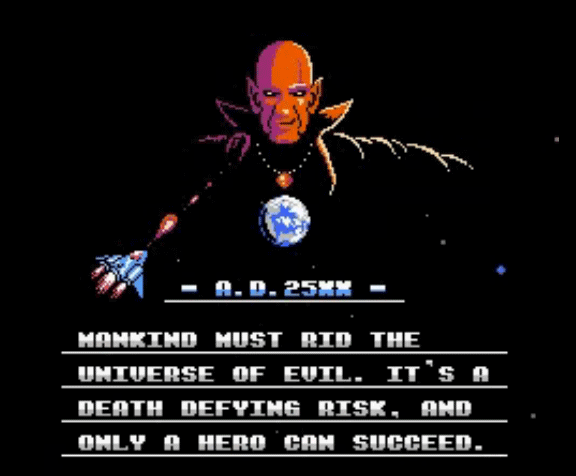 This guy still scares the crap out of me. Looks like an evil Vulcan Captain Picard.

Unlike other shooters of the time, rather than being bound to the fascist rigidness of the X or Y axis, your ship moves in a full 360-degree circle. Enemies will come from outside the circle into the center, and you must blast them away. You can upgrade your main gun and get powered rockets, somewhat similar to Star Fox. You advance in a linear fashion from one planet to the next, because, in 25xx, the planets have all perfectly aligned.

I enjoy coming back to this game every once in a while. Just like how Street Fighter and Nintendo World Cup remind us of the Soviet era with USSR and West Germany, Gyruss reminds of a simpler, gentler time when Pluto was a planet. It’s nice to know that, by 25xx, scientists have realized their follies and reinstated Pluto into the solar system. 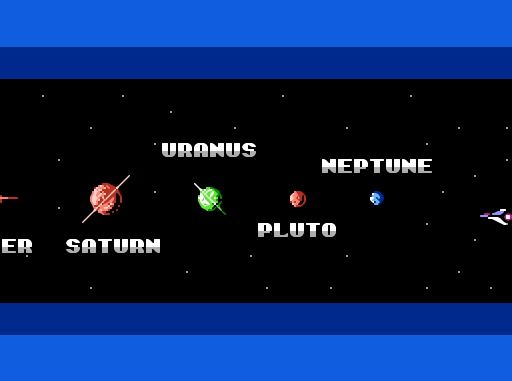 Why is Neptune first, you ask? Well, Pluto has a very skewed orbit compared to
the other planets, and Neptune is actually further away from the Sun at times.

Each planet section consists of three levels of multiple waves of space baddies, followed by a boss battle against a menacing contraption. After Mercury, you’ll move on to the sun. It turns out that the sun’s corona has been replaced by a eye-bot contraption and is super pissed at you, as noted by the hundreds of solar flare balls it sends your way.

Hmm…maybe it would have been better if Pluto wasn’t a planet, because this adds up to a lot of enemy encounters and is a very difficult game. This is true for most arcade ports, since that’s the way arcades racked up coins: by making the games hard, but addicting. You can enter the Konami code here for 30 extra ships, but you actually have to enter it backwards. Perhaps this was a way for the shell company Ultra to hide their association with Konami. In any case, you’re going to need those extra ships, my friend.

If you’re looking to bone up on some classic space shooters with a twist and awesome music , or just reminisce about Pluto, check out Gyruss for the NES.

Email: mark.freedman@gmail.com
Website: https://gamecola.net/tag/mark-freedman/
Mark Freedman is a hard hitting reporter on just what the crap is going on in the world of video games.He also writes reviews and manages the staff Q&A column. Occasionally, he has been known to take a shower. zzzz

There's a game coming out tomorrow on XBLA that costs $5, and the proceeds are going to aid earthquake victims in Japan. You don't really need any more information than that, do you? Think of it this